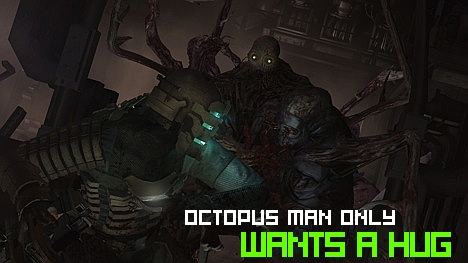 In an article for Edge, Dead Space executive producer Glen Shofield wrote about how the gore in Dead Space reflects reality — literally. Led by Shofield, the developers for the horror title, EA Redwood Shores, viewed photos of car accident and war victims to get a sense of what real dead bodies looked like.

This sounds horrible, but we had to go look at pictures of car accidents and war scenes and things like that because we had to get it right; we had to portray scenes of terrible carnage and realism. It’s a big part of making that experience convincing. The corpses that we ended up making are just horrible. When you see them like that, they’re pretty disgusting.

Shofield prefaced the above statement by indicating that the Dead Space team was looking for a way to avoid making corpses “cheap” and “unrealistic.” In the end, Shofield feels that his team created gore that was “much more realistic than any game before.”

Considering the subject matter and the inspiration, it’s quite possible that EA has succeeded in an eerily cool way. What do you guys think about this?