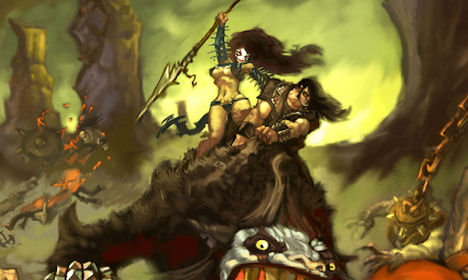 Ever since Activision surpassed Electronic Arts to become the biggest third-party publisher, the company has seemed committed to inheriting EA’s former reputation as the almighty rotten dick of the industry. The latest bastardry attributed to the Guitar Hero publisher is its alleged blocking of Brütal Legend’s release.

Brütal Legend is one of the games made “homeless” after Activision felt like decimating Vivendi. Designed by cult game maker Tim Schaffer, Brütal Legend is an action-adventure title about a rock star who commands armies of headbangers and roadies.

According to sources, Activision is being “an impediment” to the game’s release and is “blocking the process.” Why Activision would do this, outside the obvious reason of them being arseholes, is currently unknown. Developer Double Fine does believe, however, that Activision is deliberately trying to make the publishing process of Brütal Legend as difficult as possible.

Why would Activision want to stop Brütal Legend from being published? Do they want money, or are they just trying to hoard IP? We don’t know for sure, but what is very clear is that Activision should probably go and die in a fire. Oh, and stop copying Rock Band.