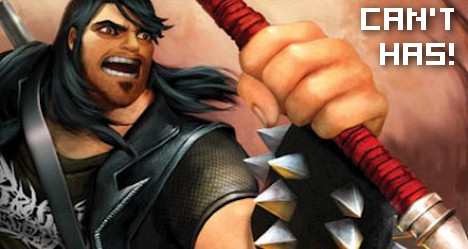 We’ve already established that Activision has been acting like a bit of a cockmuncher lately, but if recent news concerning the publisher’s Brütal Legend temper tantrum holds water, it’s a bigger arsehole than we gave it credit for. The company is apparently threatening to sue EA over publishing rights to Double Fine’s Brütal Legend, even though Activision has NO intention of publishing the game itself.

Activision Blizzard was said to be refusing to cooperate with Double Fine over getting the game released prior to EA’s acquisition. ActiBlizz doesn’t think the game could become a ten-year-old exploited franchise, so it doesn’t want to publish it. However, Activision is a jealous God, and just because it won’t publish the game, that doesn’t mean it won’t try and hoard the rights.

EA is rather confident about the whole thing, especially with Double Fine claiming it alone has rights to the game since Vivendi’s execution at the hands of ActiBlizz. Brütal Legend‘s new publisher only had this to say over the matter:

We doubt that Activision would try to sue. That would be like a husband abandoning his family and then suing after his wife meets a better looking guy.

I’m naturally against Activision in any fight, and it’s just because of things like this. The publisher abandoned a number of excellent looking titles just because it couldn’t milk them the same way it’s milked Call of Duty and Guitar Hero. Frankly, Activision should suck it up. Double Fine deserves to have this game published, so here’s hoping that the “ex-husband” doesn’t have his own way.