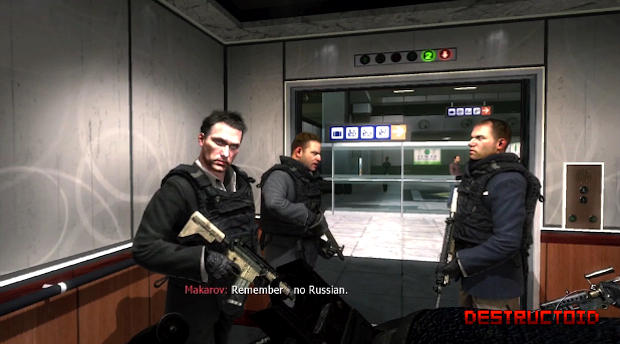 The official word from Activision is that Call of Duty: Modern Warfare 2 has not been “banned” from store shelves in Russia, but whether or not the game has been pulled as reported because of the kinda-controversial “No Russian” airport massacre might still be up in the air.

In a statement given to VG247, the publisher of the latest Infinity Ward-developed title said, “Reports that Call of Duty: Modern Warfare 2 has been banned in Russia are erroneous. Activision only released a PC version of the game in Russia which went on sale on Tuesday, November 10.”

Pulling copies effectively bans the title, but we’re going to be a bit cautious with the publisher’s wording here. We’ve contacted an Activision representative for clarification and shall bring you that when we can. If, by chance, you’re in Russia this afternoon and spot a copy of the game, feel free to drop us an e-mail.

[Update: In a statement given to Edge, Activision said they blocked the scene — we’re assuming the No Russian level — after being advised by legal counsel. It’s unclear if this happened pre or post release.]

Filed under... #Banned#Call of Duty