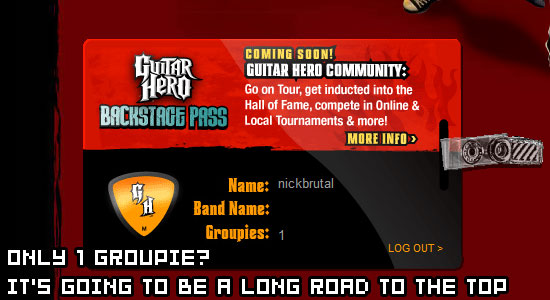 That’s the name of our game here at Destructoid — collecting groupies like comic books. So it’s almost as if Activision and Agora Games were in our heads when they partnered to create an official Guitar Hero community Web site.

Recently launched, wannabe rockers can sign up now for a “Backstage Pass,” which gives them access to top-secret sounding insider information, news, behind-the-scenes footage, gameplay footage, and exclusive screenshots. Users who sign up early can claim their own stage name, which will be their unique identity on the scoreboards, and more.

Once the game launches on October 28, players can “go on tour” by creating or joining a group to compare scores, and compete in global head-to-head tournaments against other tour groups. But really completing the experience, is the ability to acquire groupies, which is determined by your popularity on “Backstage Pass.” Rowr!

I’m not sure if something like this will have the same impact that Bungie.net had on the Halo community, but it’s an interesting step in the right direction. And speaking of steps in the right direction, why not sign up using my referral ID? I get one groupie for each sign-up, so let’s get me in trouble with my wife!