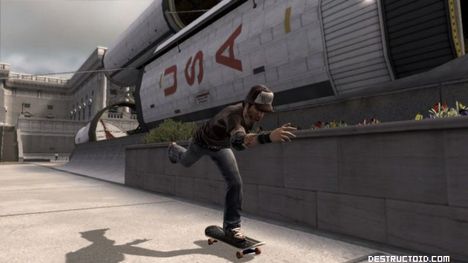 If the headline looks familiar, it’s because a day or so ago we reported on GamePro’s upcoming cover story that they flaunted all over the Internet. But now Activision has gone and revealed their official plans for Tony Hawk Proving Ground, a title which will be hitting the PlayStation 3, Xbox 360, Nintendo Wii, and the Nintendo DS later this year.

The game will focus on allowing players to have deeper customization, allowing them to define their character, story and style based on choices that they make. Maybe it’s going to be like Deus Ex, only with more ollies and at least one likely Dead Kennedy’s song (my money’s on “Rambozo the Clown”).

The game will also feature a full-featured Video Editor, so players can finally create that epic skate video they’ve been dying to make since first laying eyes on the Warehouse level in the original Tony Hawk Pro Skater. Actually, I don’t think anyone asked for this. Still, if Neversoft creates a Youtube like service where players can share and rate videos online (Game 3.0!), this could be a nice community feature.

New skate mechanics including Nail the Grab, Nail the Manual, and blah blah blah. Here are the screens, along with the full press release after the jump.

Santa Monica, CA – May 14, 2007 – This fall gamers will be able to command their skating destiny in Tony Hawk’s Proving Ground from Activision, Inc. (Nasdaq: ATVI).   For the first time, players will have the freedom to define their character, story and style based on the choices they make, the paths they choose and the style of skating they use on the proving grounds from Philadelphia and Baltimore to Washington, D.C.

Tony Hawk’s Proving Ground features deeper customization than ever before, including a Video Editor with full-featured editing tools and visual effects for creating “epic skate videos,” and a fully customizable online Skate Lounge where players can skate with friends in the ultimate pad.  In addition, players will have the freedom to skate from single player to online seamlessly, as well as utilize new gameplay mechanics such as skateable terrain altering and building, and Bowl Carving, delivering the most empowered skating experience ever. Tony Hawk’s Proving Ground also features even more Nail the Trick™ moves such as Nail the Grab and Nail the Manual intensifying the thrill of pulling off big tricks.

” Tony Hawk’s Proving Ground drops players into the skateboarding world like never before,” said Joel Jewett, president of Neversoft.  “This is the largest, deepest and most compelling Tony Hawk game ever.  You can skate the best lines, define your own style and produce your own videos.  You can even take it further by tricking out your own Skate Lounge, where you can hang out and skate with others online.  Proving Ground will throw you so deep into the lifestyle of skateboarding that you won’t be able to get out.  Hands down, it’s the most exciting Tony Hawk title yet.”