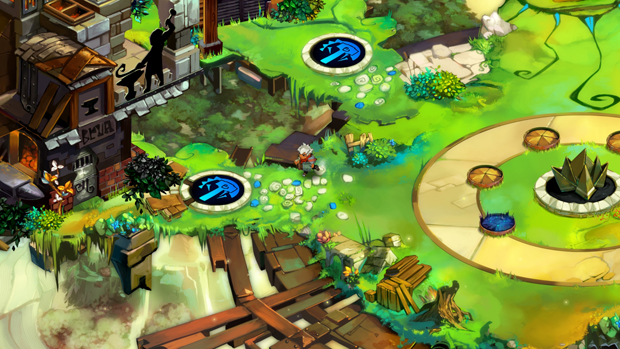 I get more than a little giddy every time I see the words “new action-RPG,” and the full reveal of Bastion from Supergiant Games is no different. Couple that with the promise of an unusually emotional experience and you just might hear me squeal a little. I know, how embarrassing.

In development for the PC and consoles (presumably for XBLA and PSN), Bastion is set in a dying world where the player’s actions change the narration in real time. What does that mean? No clue! But it certainly sounds impressive, and there’s no lack of ambition going into the premise.

I’m already in love with the game’s art style and tone, and I’m hoping the gameplay will match up. If you’re anything like me, that’s always the part where you get burned. With any luck, this won’t be yet another action-RPG that just isn’t any fun to play.

If you’re PAXing it up this week, you’ll have an opportunity to check the game out, as it was selected as one of the “PAX 10,” a grouping of ten promising independent games. I know there’s a lot to see at PAX, but if I were you, I’d reserve a few minutes for this one.