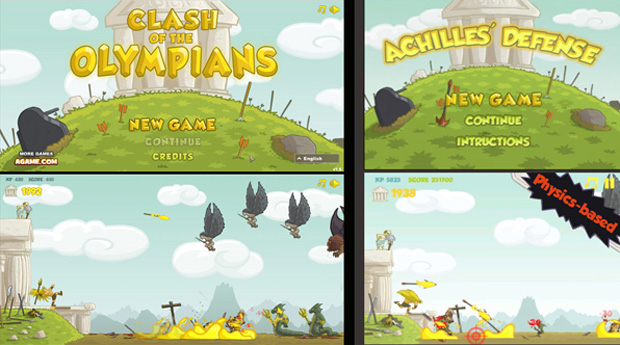 In a case similar to Halfbot’s The Blocks Cometh, IronHide Games’ flash game Clash of the Olympians has been utterly ripped off by PTT Solution’s iPhone game Achilles’ Defense. Everything down to the music has been copied from the Flash code which is readily available through IronHide Games’ website.

To make matters worse, the iPhone game has supposedly been in the Top 10 in 17 countries and has been featured in the ‘New & Noteworthy’ section on the App Store. The game was also free last night, but has since been changed to a $0.99 price in a move similar to when The Blocks Cometh‘s rip-off version was raised in price following exposure.

When we asked PTT Solution‘s iPhone Department Leader Ngo Duc Hiep for comment on the situation, he responded under the name Pete J with a simple “It is not Clash of the Olympians.”

If you want to see the similarities between the two games for yourself, try out Clash of the Olympians here and compare it to this YouTube trailer of Achilles’ Defense.

People have voiced their outrage on the game’s YouTube trailer as well as on the company’s channel and Facebook page — the latter of which was filled with accusations of theft and has been removed overnight. The game’s Twitter account remains active, if very silent in the last two days, and the company’s Twitter account doesn’t look like it would respond to anything either to be honest.

We wish IronHide Games all the best in resolving the matter and hope that Apple will promptly remove Achilles’ Defense for blatant thievery, as IronHide does intent to release an iOS version of the game they worked hard on.