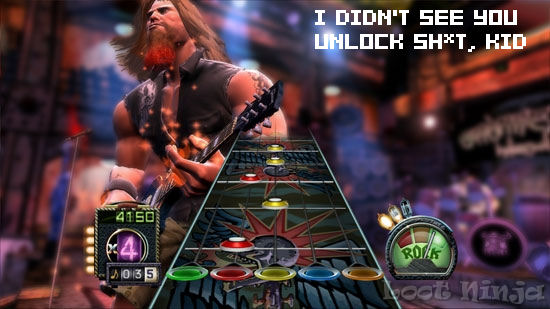 Any of my recent attempts to play Call of Duty 4 are enough to tell me that Xbox Live is just a little bit frustrating at the moment, but Dan Landis over at Ripten is having an even worse time of it, as Xbox Live has apparently eaten one of his achievements for Guitar Hero II. He and a friend worked to get nearly all the co-op achievements and finally, after much hard work, earned the one for breaking 800,000 points on a song together. Needless to say, he was very proud of the achievement.

Imagine his distress when he checked his account and discovered that his crowning glory had been locked up again. He called customer support and after convincing them he wasn’t playing Halo 3 (haha), they told him that Microsoft is currently rolling back parts of the Xbox Live servers to help iron out the recent bugs. This was affecting achievements, and if he got another one on Guitar Hero II, it should restore anything missing. Shame then, that the only achievements he has left are ones he can’t manage. I don’t even want to think what people who have unlocked everything in a game are expected to do.

Related to Xbox Live or not, I know firsthand that missing achievements are certainly a real occurrence. When I had managed to buy a console that got banned from Xbox Live, all of my Samurai Warriors achievements completely disappeared. Once I’d gotten a new machine and saved the game once, they all re-appeared in a mad achievement avalanche.

Strange that Xbox Live would affect an account in this way, but technology is frightening like that. Anybody here lost some of their win lately?

[Thanks Wardrox, I’m still not reading your blog]