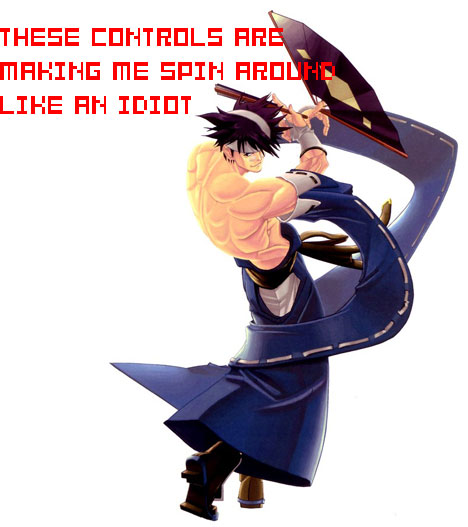 So the other day I mentioned Guilty Gear: Accent Core for the Wii. Now, IGN brings word of what the controls for the Wii are going to be — and let me say, I want to cry after reading their description.

With this control scheme, you use the nunchuk analog stick to move your character and guard. The nunchuk and Wiimote can be shaken to perform standard attacks. You perform specials by holding buttons while shaking.

Just…imagine that. I can understand this sort of flailing around for Dragon Ball Z: Budokai Tenkaichi 2, but Guilty Gear is so fast paced that trying to actually play, and pull of some of the more intense combos, are going to be very awkward to pull off. At least this means that for all those who will own the Wii version, they’ll be able to put up some hilarious Youtube videos.

Now, why am I kvetching on the front page about this? I really don’t think that this fighter should be on Nintendo systems. Sorry, but between this and Dust Strikers, Sammy should keep this on the PS2/3 or 360, unless a nice arcade pad comes out for the Wii.

Now, if a fighting game was designed based around the Wii controls, that could lead to some interesting results. Are you thinking of what I am? C’mon designers — I’m looking forward to a Wii-specific fighter, whether it be 2D or 3D.

[Thanks for sending this one in, Necros!]