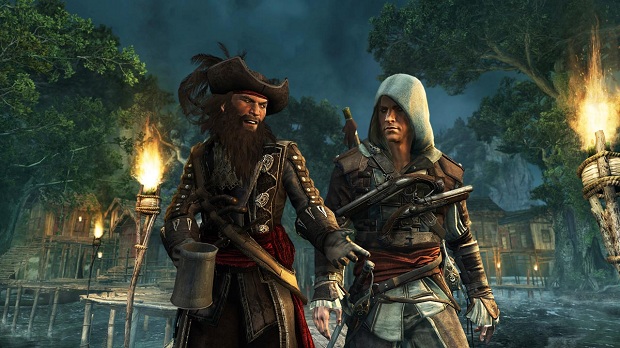 But not quit altogether, because that’d be crazy

Man, it’s gotta be tough being a pirate. There are certain expectations of you that you just have to live up to. Even if you have a little lady at home that you love more than the world, you probably still have to have some extramarital relations. For the sake of appearances, of course.

That’s the problematic scenario that Edward Kenway, Assassin’s Creed IV: Black Flag‘s protagonist, finds himself in. In an interview with Polygon, Darby McDevitt, the game’s lead scriptwriter, explains that Kenway’s struggles to stay faithful will play a central theme in the overall narrative.

McDevitt teases that “Edward Kenway is a raucous and bawdy chap, but he’s also a married man, and one of his primary motivation in Assassin’s Creed IV: Black Flag is to get rich and prove himself a ‘man of quality’ to his family and betters. So there is a special woman in Edward’s life, but there are also other not-so-special women as well.” McDevitt also confirmed that Kenway would have a few other significant intimate relationships in the game, including with lady-pirate Anne Bonny.

It seems as if Kenway has a very tenuous grasp on the term “man of quality.” His romantic pursuits sound like the type of thing that need to be sorted out by Maury. Who knows how many little assassin babies are running around thanks to him?