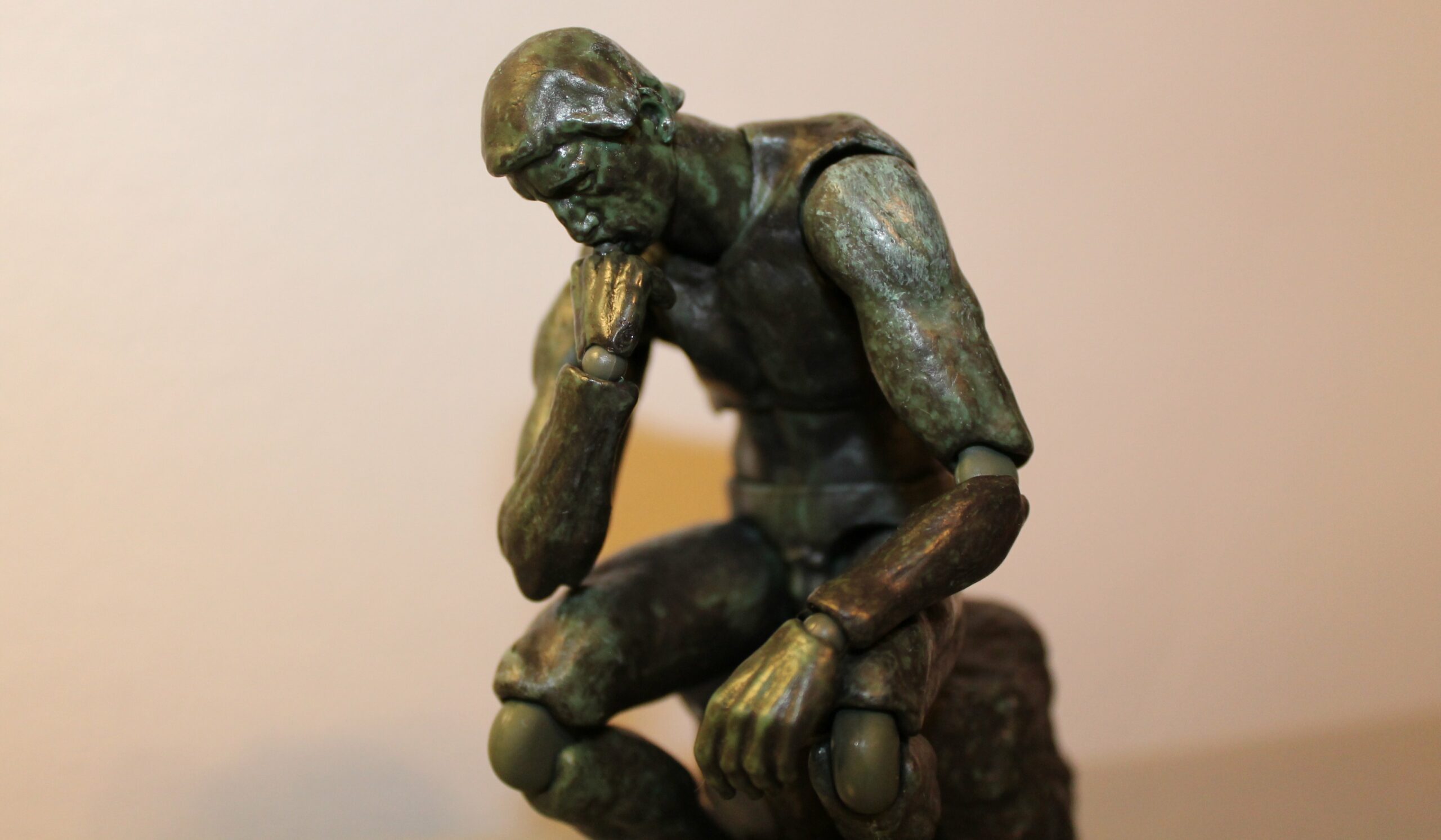 [Not all gamers are svelte, muscular love machines like able to think. Luckily, he’s here to offer some gaming-based advice on how to get buff and tough in the new year. Want to see your work on the front page? Get your backside into gear and write something, and you, too, could see your work featured by Destructoid! – Wes]

It’s the new year and that means it’s time to reinvent yourself and become a better person. One way people do this is by saying they’ll get in shape. The problem is, exercise sucks. Exercise is the devil and I, along with most everyone else, hate it. Some people say they love it, but those people are freaks and probably witches that we need to burn at the stake defiantly.

Unfortunately for me and for every other normal person, exercise is kinda important. We organic meatbags need to keep moving or else we’ll become water-filled blobs. Who can stand listening to all that sloshing? Not me. That’s why I’ve come up with able to think’s Amazing Gamer Exercise Regimen™, in which I take elements from games and turn them into exercises you can do to keep from becoming an amorphous blob of pointless biomass.

I recommend doing these exercises in the morning before you shower. That way you’ll be able to soothe your aching muscles under the hot water and won’t stink like a nasty little pig person. Don’t do it before bed unless you want to have a really bad morning. Trust me.

I should probably also mention that I am not a trained physician or dietitian or exercise person or anything. I invented (or stole) all of these, so they may actually be dangerous. You’re doing them at your own risk. That said, I’ve been doing them for a over a month with no issues so far apart from aching muscles. I’ve been assured that that’s normal, however.

Now that I’ve covered my ass legally, let us begin. 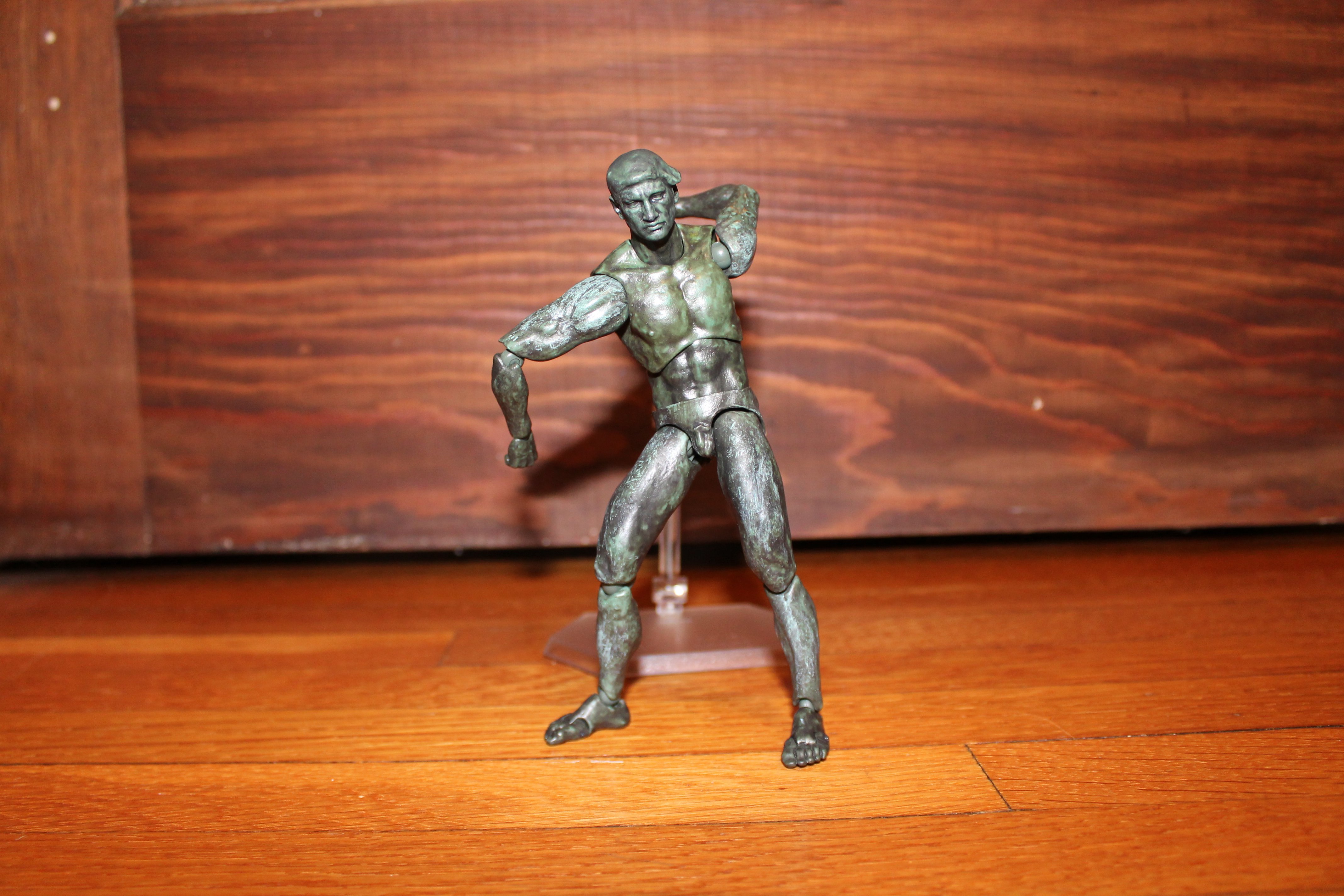 The Souls series, along with many other games, feature ragdoll floppy-body physics when enemies die. We’re going to take inspiration from that with our stretches. After all, we don’t want to strain anything, now, do we?

1. Bend and contort your arms and legs in ways that stretch your muscles so you don’t pull something later. (In other words, do basic stretches.) 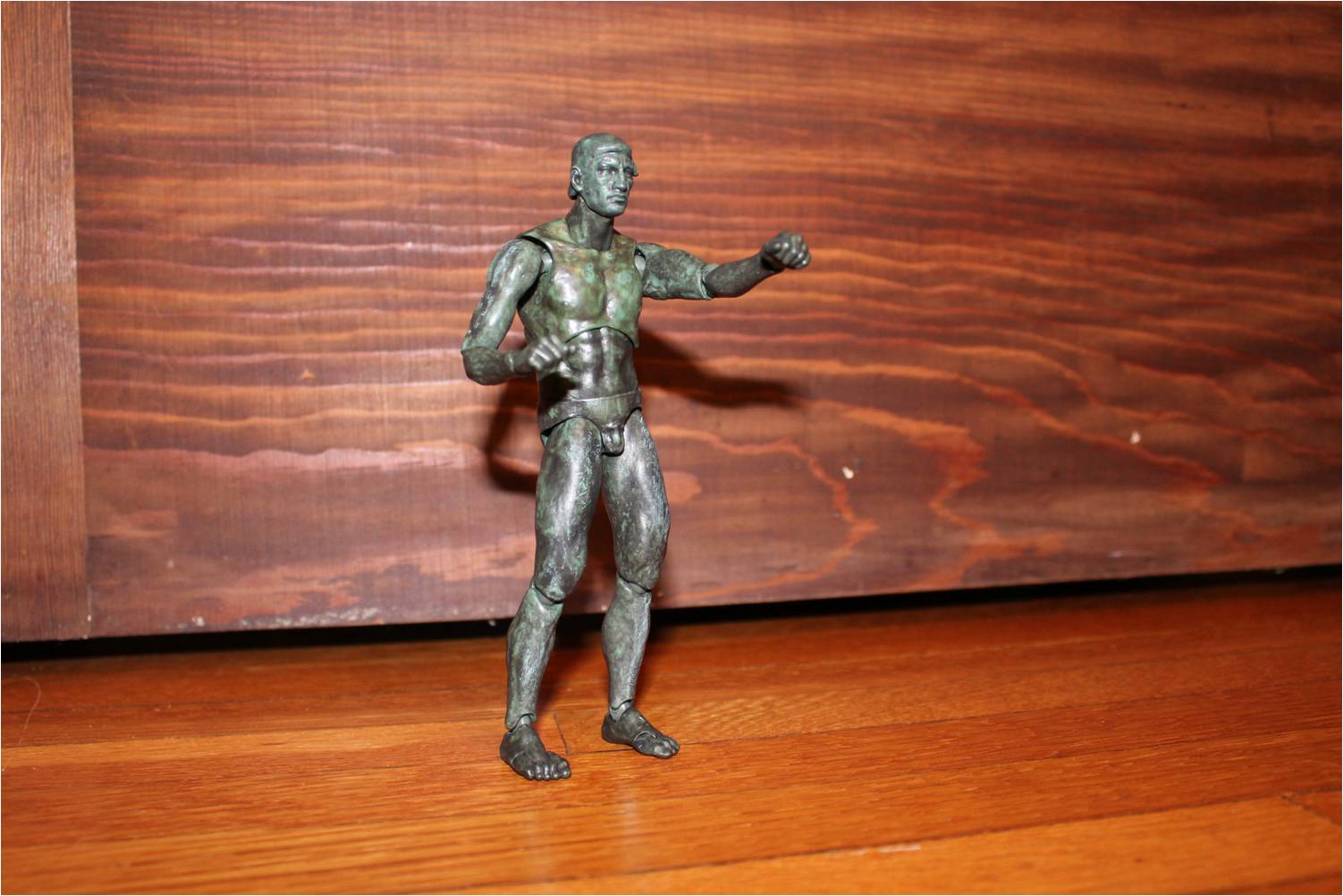 Now that we’ve loosened up we can move on to some cardio. I’m taking inspiration from the “Figure Fighter” minigame from Rhythm Heaven, which is why it has the exact same name. I’m creative like that. For this one we’re going to beat punching a bag like the figure does in the game except the punching bag isn’t actually there. If you actually have a punching bag then by all means use it, but most people don’t have one of those hanging in their house so they’ll have to use their imaginations.

1. Cue up this video and get ready to punch the air.

2. When you hear, “Jab!” do a quick jab. Be sure to alternate arms between jabs.

5. Do this until you feel some strain.

Also, be careful not to accidentally hit anything. I’m not being blamed if you break your hand on a doorframe or punch your cat or whatever. 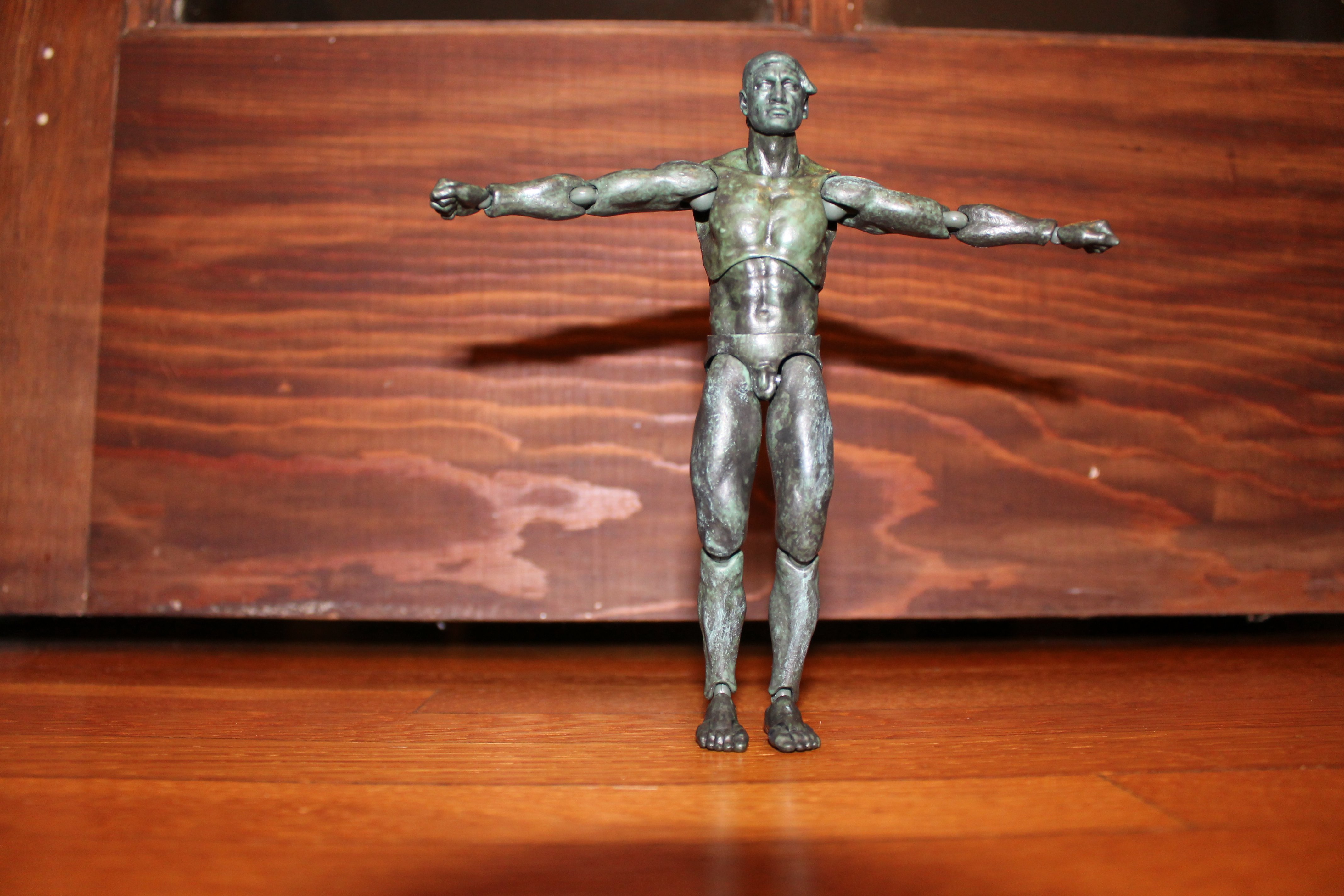 T-Frames is a brilliant exercise I’ve invented that involves lifting your arms so you’re mimicking the default t-frame pose that 3D character models have. I’ve taken inspiration from those bad Unity games on Steam where the enemies float toward you in that default pose. If you’ve ever seen a Digital Homicide game, you’ll know exactly what I’m talking about. Anyway, on to the exercise.

1. Start with your arms down, flat against your sides.

2. Lift them up into the T-Frame pose.

3. Slowly lower them back down.

4. Repeat until you feel a slight burn.

Optional: I hold jugs of water in my hands as weights when I do this because it’s too easy for me without them. Just be careful if you do this because I reckon it’d be really easy to pull something if the weight is too heavy. 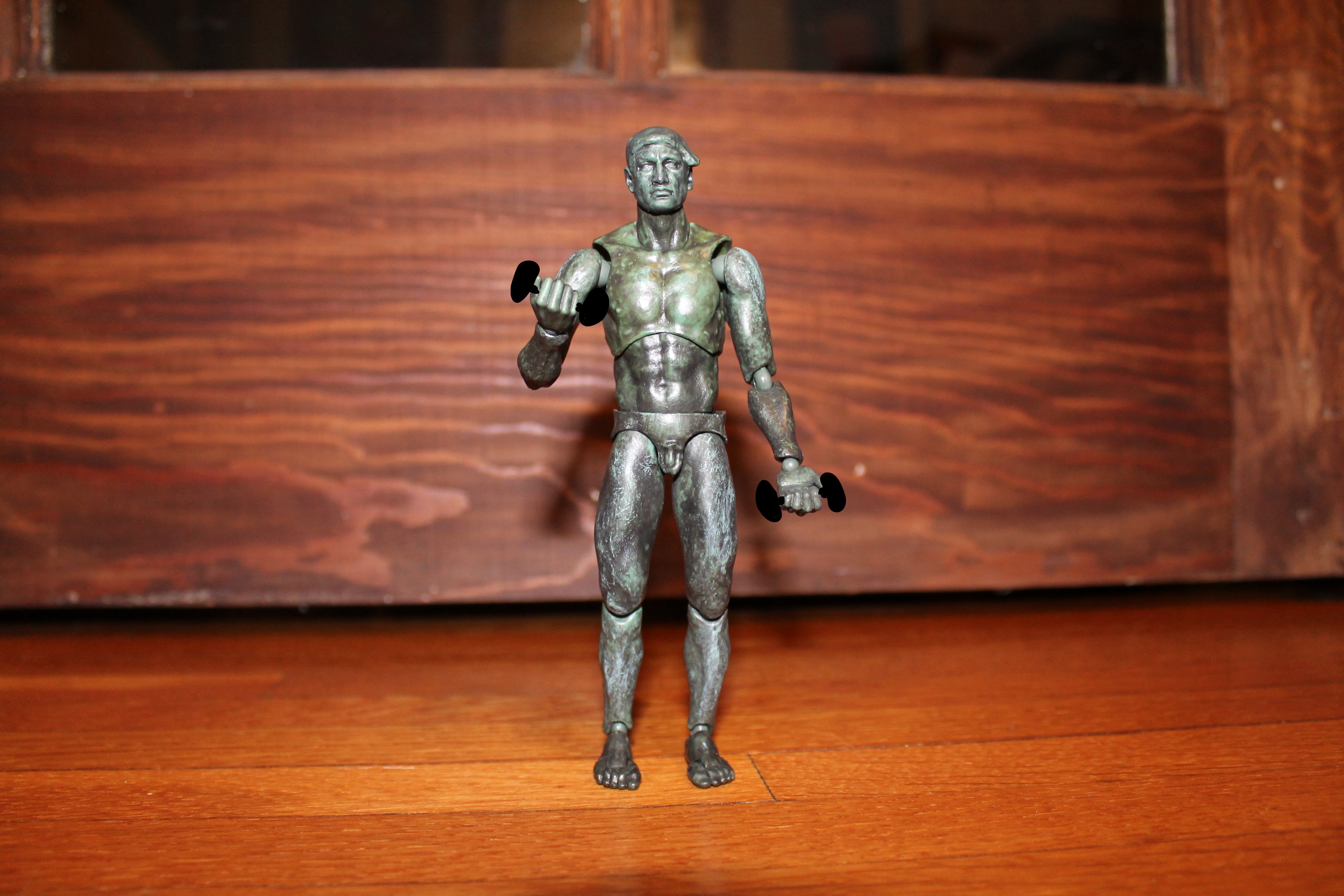 This is the only one here that’s an actual, real exercise Travis Touchdown does in the game, but since it’s actually from a video game I’ve decided it counts. In No More Heroes, Travis does this exercise in Thunder Ryu’s gym to extend his beam katana combo. Unlike him, however, we’re not going to be told to bend over like we’re using a Japanese toilet before we start doing it. You’re going to need weights for this one. I use juice jugs I’ve filled with water. Regular weights probably work better but I’m too cheap to buy them.

1. Hold one weight in each hand with your arms held at your sides.

2. From the starting position, pull the weight up to your shoulder using your elbow joint to do the work.

3. Repeat this, making sure to alternate each arm you lift, until you feel a slight burn. 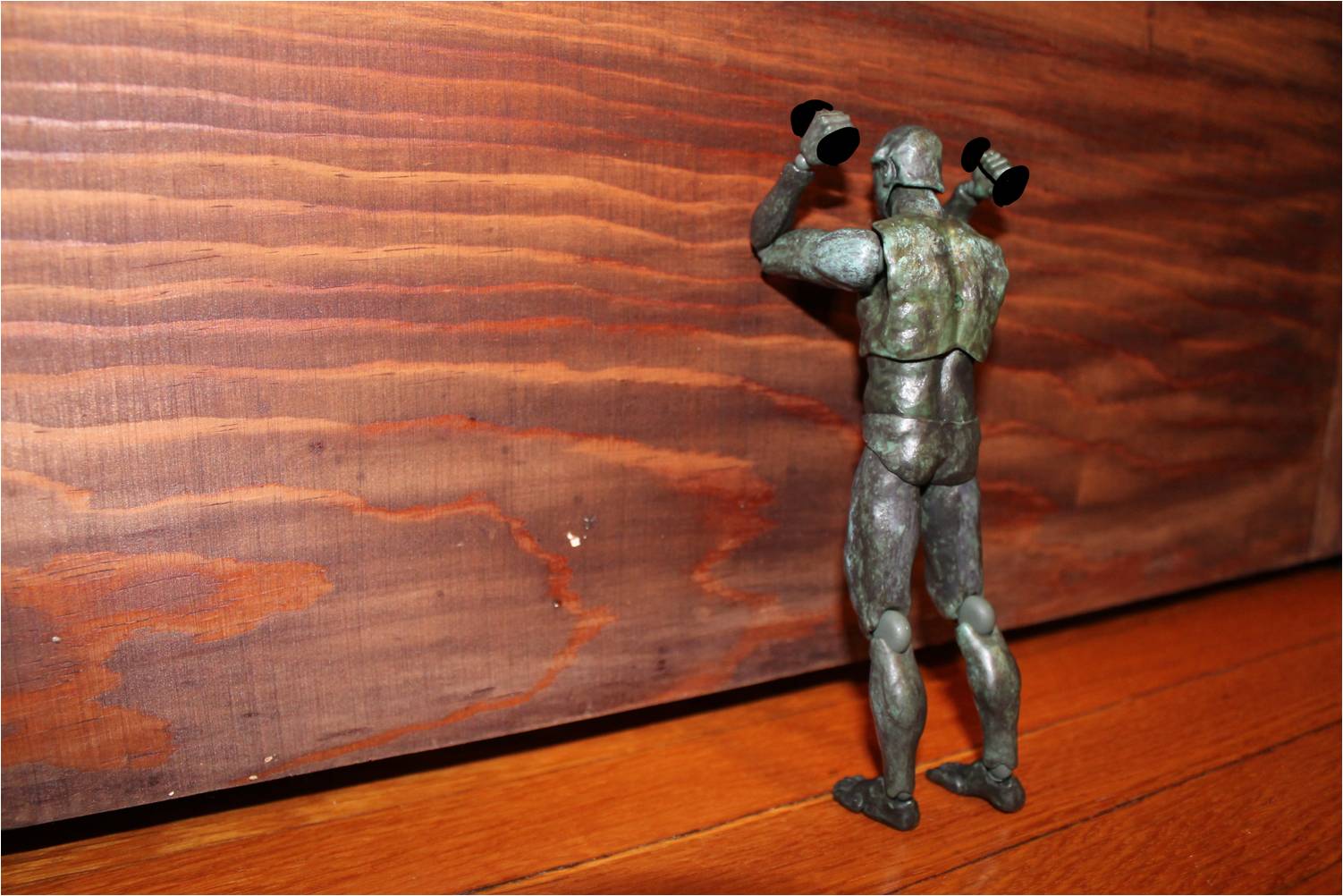 In this exercise, we’re going to pretend to throw spears. This will exercise the muscles on the backs of our arms. You’re going to use the weights again, but be sure not to actually let go of them when you mime the throw as they could explode and get water everywhere.

1. Lean on your elbows against a wall or door with your hands behind your head and the weights in your hands.

2. Lift your arms up and forward, miming throwing a spear, alternating arms.

3. Do this until you start to feel a burn in your arm muscles. 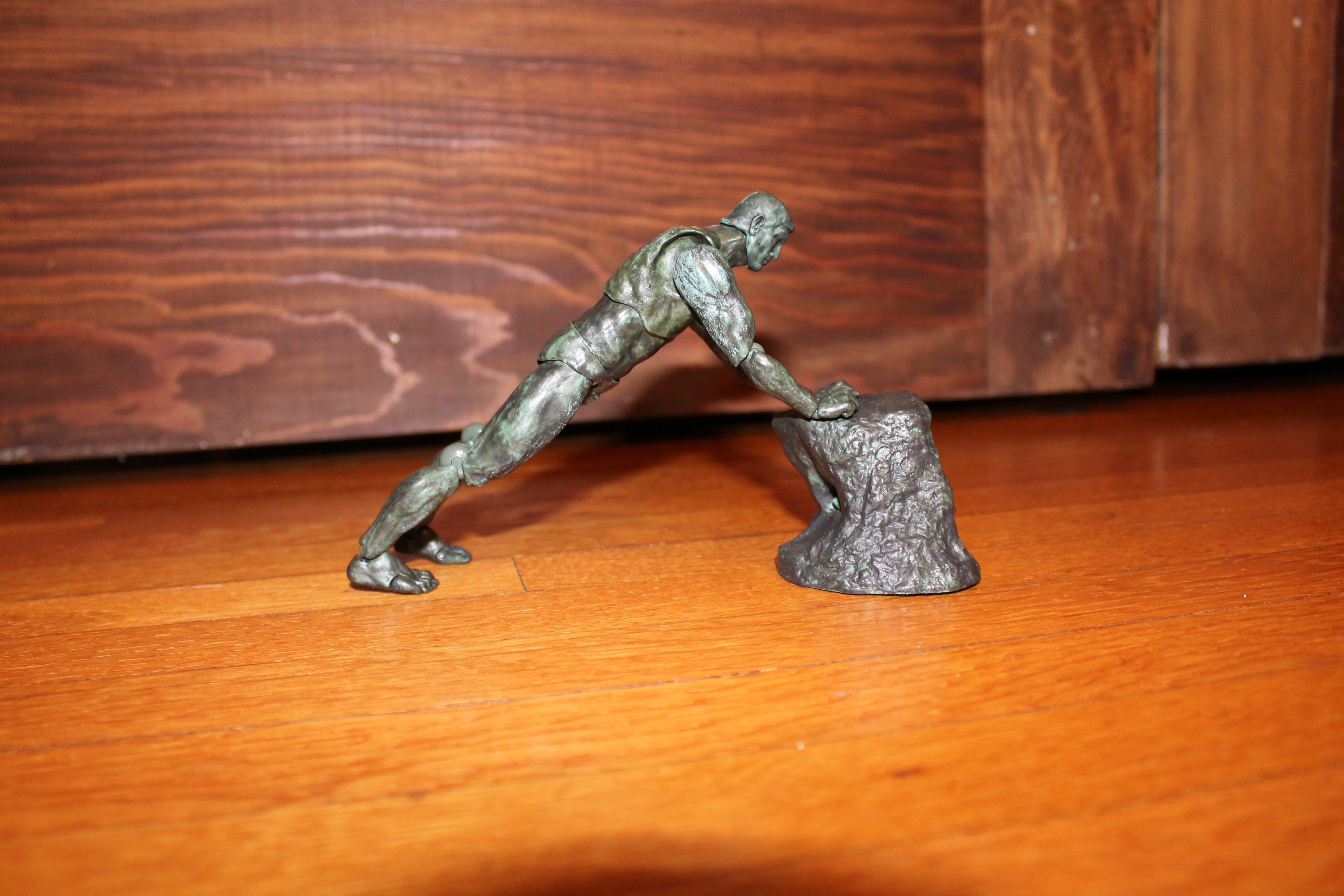 If you’re a creative person like I sometimes am, you’ve tried a level maker in a game before. The first game I can think of where this was a major selling point was Excitebike. You could lay out ramps on your own course for you and your friends to play. It was a fun feature. For an exercise we’re going to hold ourselves on an elevated flat surface and make a ramp using our core muscles so an imaginary motorcycle can drive up our backs and ramp off our heads. Unless of course you’ve got a really fat ass, in which case the imaginary wheel might get stuck in your butt crack and the imaginary driver will be launched off the bike and break his neck crashing into your wall.

2. Do a pushup and hold it using your core muscles as long as you can.

3. Repeat until you feel a tiny bit of burning in your core. 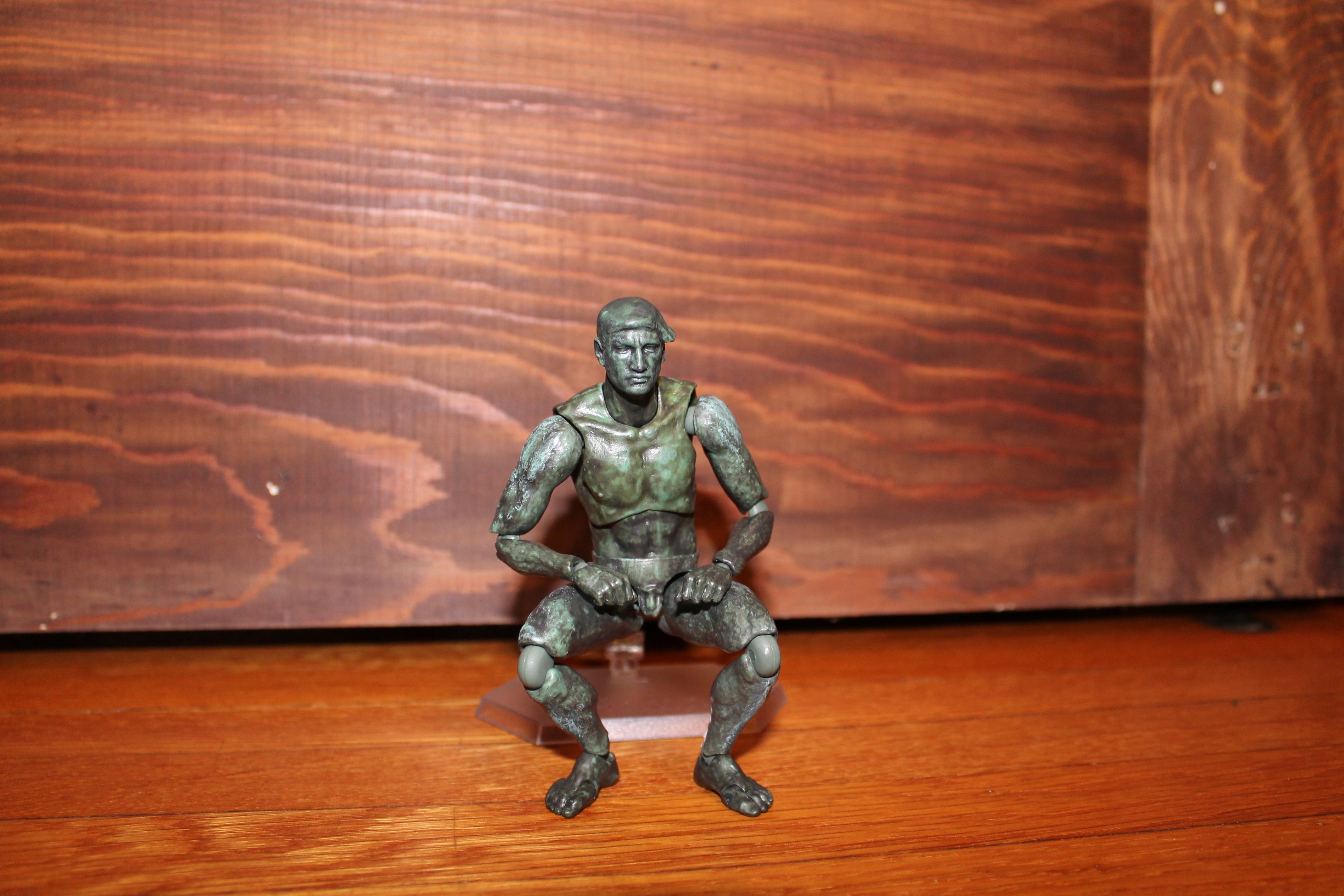 When you press the cross button while standing still in MGS, Snake will crouch down. If you tap it repeatedly, Snake will crouch and stand in a slightly amusing fashion. We’re going to pretend we’re Snake being controlled by an easily amused player.

1. From a standing position, crouch down using your legs and core muscles.

3. Repeat until you feel a slight burn. 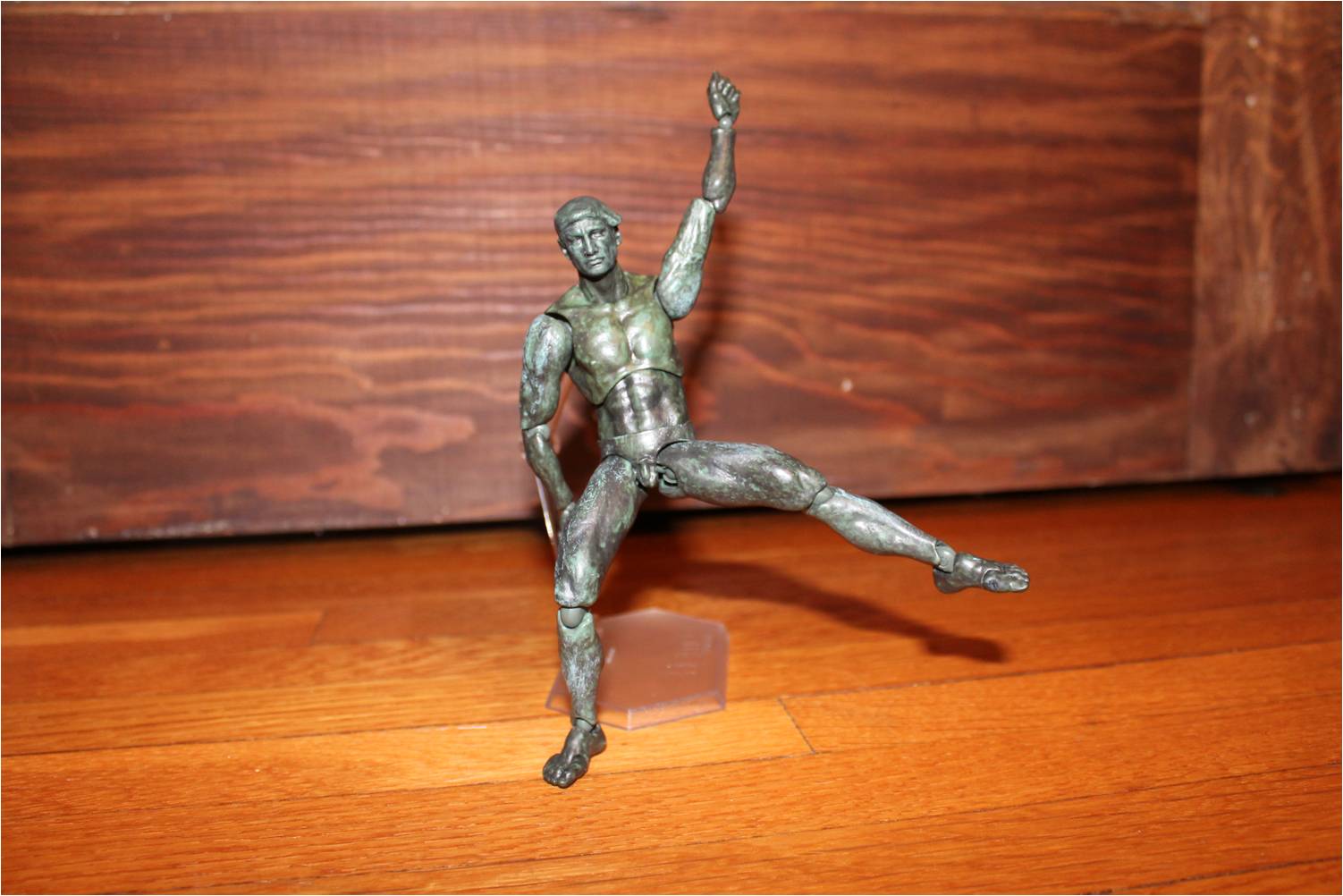 We’re going to need to loosen up and stretch after all that work. So we’ll do Step 1 again and then we’ll be done. 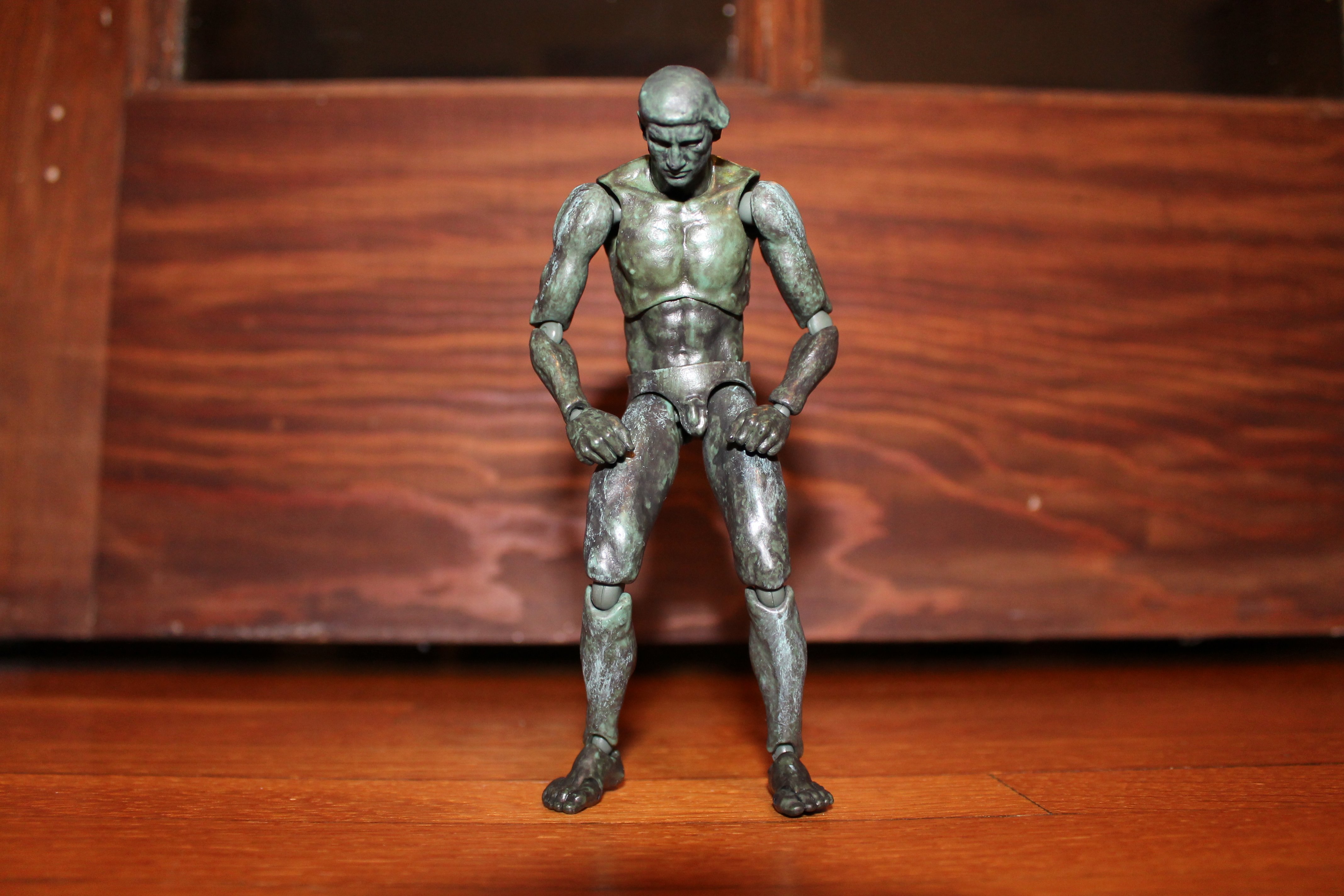 Now you’re done! Take some deep breaths and center yourself. Let me say in advance I’m sorry for how you’ll feel later today (and tomorrow and possibly the next day). You’re going to feel like hell but it’ll get easier if you don’t pussy out like a little wet kitty and quit. You’re going to want to repeat these exercises every time the pain subsides. Eventually the pain won’t be as bad and you’ll start feeling better in general. That’ll be how you know it’s working. I didn’t believe this until I experienced it but you will actually have more energy and be in a better mental state. I’m serious when I say it’s worth doing.

Since you’re doing exercise now, I’ll give you a bit of advice for minor changes you can make to live a healthier lifestyle. 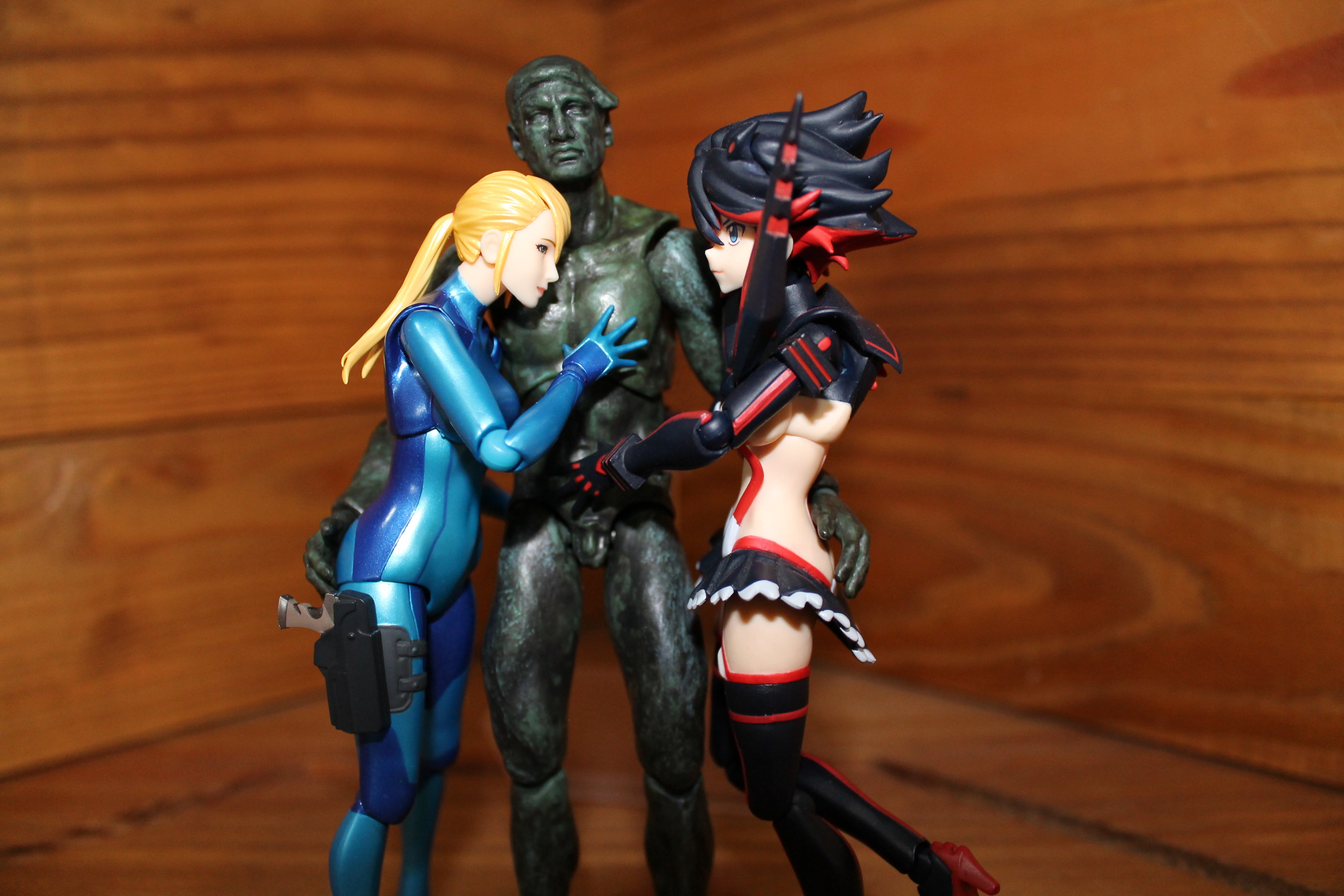 So there you have it! These exercises and tips have worked pretty well for me, so hopefully they work for you too. And if they don’t you may be a wrong person and should get that looked into.

able to think
Hi everybody! My name's Peter and I live in Ohio. I was introduced to gaming on that fateful Xmas where I got a SNES with Super Mario World and Donkey Kong Country. All these years later and I love gaming more then ever!