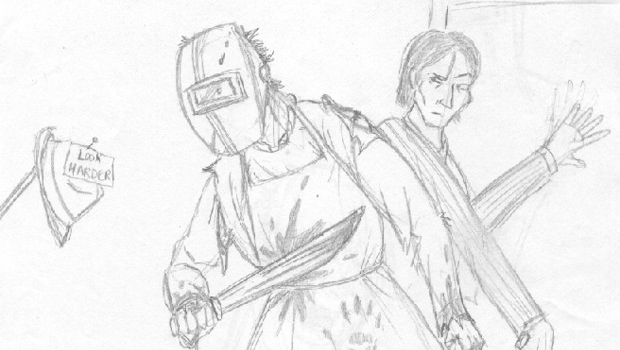 [For her Monthly Musing, Stephanie K talks about one of my favorite adventure series — the Trilby games. Believe Stephanie when she says the games are incredible. Promotions for this month are wrapping up, but make sure you check back on Monday for May’s topic. — JRo]

“I was not alone, for foolhardiness was not then mixed with that love of the grotesque and the terrible which has made my career a series of quests for strange horrors in literature and in life.”
– H.P. Lovecraft, The Lurking Fear

I have always had a fascination with the paranormal ever since I was a little girl. Without getting into a controversial debate on whether or not the supernatural exist, I will say that I am a firm believer, though I am also a skeptic. Much like the citation from The Lurking Fear, my fondness of the unexplained has lead me to enjoy media of the same nature (in case quoting Lovecraft did not hint at that). The horror genre is my favorite genre when it comes to any form of entertainment: film, literature, and of course, video games. To this day, the Resident Evil series remains my favorite series but I enjoy almost any type of horror game: psychological, J-horror, mindf*ck, etc. Though it seems like it has been so long since I have played through a truly, satisfying horror experience.

Alan Wake and Amnesia have been the closest games to scratching my horror game itch since Fatal Frame II back in 2004 or Call of Cthulhu: Darkest Corners of the Earth in 2005. Since then, horror games stopped making my skin crawl. The dreadfulness that I once felt faded with time and my mind was no longer twisted. Soon they became nothing more than tasty snacks that helped keep the hunger at bay but never made me full. Even Alan Wake and Amnesia have not been able to accomplish that; they only brought back the memories of the games I use to love. Not that that is a bad thing but I have certainly been craving a good, horror-themed game for quite a long time.

And then last month I was introduced to a series that would be the equivalent of taking an Ethiopian to an all-you-can-eat buffet.

I am sure many of us have heard of Yahtzee from the Escapist. If so, we all probably know that he is an angry British-Australian who likes to make reviews that are borderline trolling videos, but did you know he made games? I did not but apparently he has been making them since 1998 with Adventure Game Studio and uses graphics has designs from glorious MSpaint. Among his various adventure games sits a gem of a series that is a must play for anyone looking for a way to kill a few hours and enjoy it.

The Chzo Mythos series (referred to as the John DeFoe quadrilogy on the site) is a collection of four short games. Three of them play like classic point-and-click adventure games while the forth is a text parser and all of them are heavily influenced by a variety of aspects for well-known horror works. The quadrilogy seems to mirror the Cthulhu Mythos when it comes to the core storyline as the two share many similarities regarding an elemental god that feeds on pain and the cult that worships it. Though what stood out the most to me about the Chzo Mythos is that even though the each game is tied in together, each one contains very distinct characteristics, plot, and explores different premises of psychological horror. I will do my best to go through and talk about all four, but it is a bit difficult to fully explain why I love each one without the risk of spoiling them. Due to this, I will be providing links that will open up an image that will farther explain my point. So if you have any interest in playing these, do not click the links until you’ve completed them.

5 Days a Stranger is the first game in the series that was released in 2003. I was thoroughly surprised by the level of depth and detail that the game contained graphically. For a game that had designed by a basic program featured on every Windows running computer, it looks pretty good. 5 Days won best gameplay, dialogue scripting, scripting, and puzzles from the AGS Awards. However, it is the most difficult to play due to the fact that it was the first. The gameplay was not yet as defined as it becomes in the later installments. The direction on how progress properly is confusing and not well explained, which can cause frustration especially when trying to do something that requires a very precise action.

It takes place over the course of five days and tells the story of a self-proclaimed gentleman thief named Trilby. He breaks into a manor that once was owned by a famous adventurer. His hopes of finding expensive treasures deteriorate almost instantly when he discovers that he is trapped within the manor. Luckily though he is not alone. Four other prisoners are stuck within this hell along with an evil entity. Nightmares, visions, and possessions begin to occur. They reveal images of a masked man wielding a machete who resembles Jason Voorhees and Mike Myers. 5 Days obviously contains elements of the typical slasher horror films where the main characters are lured away and picked off one by one. They then need to learn to work together to figure out how to survive and discover a way to escape. Though it contains more than that… CLICK

In 2004, its predecessor 7 Days a Skeptic was released. It takes place nearly 400 years after 5 Days. Personally, it is my least favorite out of the whole mythos. Despite its improved gameplay over the previous game, I just did not find myself “clicking” with any of the characters which defied seeing them die unexplainably. Anyway, it is still a solid game that won very similar AGS awards as 5 Days did.

As mentioned before, it takes place almost 400 years after 5 Days. You play as psychiatrist, Dr. Jonathan Somerset, who is stationed on a spaceship. He has some concerns about a few of the crew members who seem mentally unstable, but becomes sidetracked by the discovery of a mysterious metal box floating in space. The box is brought on board but appears to be empty… Or is it? Much like in 5 Days, the crew members begin to die off one by one. It tries to emulate the claustrophobic feeling that comes from being isolated and trapped in a location that is almost impossible to get to. 7 Days achieves this quite well, especially when the threat begins to chase you. You have no place to run and you cannot leave the spaceship.

Trilby’s Notes, the third game in the series, is technically the second game chronologically. Fans of the Chzo Mythos say you could play this second but suggest that you save it until after you have finished 7 Days. (Though from personal experience, you could also technically play it last and everything would still make sense.) What makes Trilby’s Notes stand out among the rest of the series is that it plays as a text command game similar to early Sierra-Online games. The change in gameplay style is extremely important to the game’s theme… CLICK It was nominated nine AGS award but only won four: Best game, story, animation, and non-player character- Trilby.

Trilby returns after a few years of suffering from nightmares after the DeFoe manor incident. He is on a personal mission to try to track down a cursed idol that may hold the answers to what has haunted him since that damned day. Hallucinations occur constantly throughout game as we see very heavy Silent Hill references. The hotel where the game takes place seems to sit somewhere between the living world and the magical world where Chzo resides. Just like the Silent Hill series, the worlds alternate between the two which is also the key to quite a few puzzles in the game. The demonic whispering and sudden changes to the environment aren’t the only things that try to screw with you. Trilby’s Notes attempts to build that isolation, paranoid feeling that spawns from you being the only one to notice the changes around you. No one else that Trilby encounters is aware of the alterations in reality, making him completely alone.

Trilby’s Notes is personally my favorite out of all the Chzo Mythos games and stands are my third favorite game of all time. By the time I got to playing Trilby’s Notes, I grew to really like Trilby. He’s a classy gentleman who’s a clever bastard. Intelligence is a trait I highly like in my characters. It also helped that Trilby’s Notes was influenced by Silent Hill, yet another favorite series of mine.

The conclusion to the mythos is 6 Days a Sacrifice. It takes place exactly 196 years after 5 Days and 196 years before 7 Days. It is suggested that you play this last despite it being the third game chronologically mainly because it was created for the sake of wrapping up the series. It connects all the previous games together and answers many clouded questions fans had. 6 Days returns to the series’ signature point-and-click style of gameplay but is the most defined wise and instructed. It was nominated for seven AGS awards but sadly only walked away with best story and best non-player character with Trilby once again.

A new religion known as Optimology has arisen but their motives seem questionable. Theo DeCab, a building inspector, is sent to investigate anonymous claims of unexplained extensions being added to the headquarters. However, he becomes the guy who is at the wrong place at the wrong time. He soon becomes one of three captives within the building. Injured and confused, Theo attempts to help the other two captives escape but they soon discover that something demonic roams the mysterious basement he is trapped within. In a way, you can call this a true “survival” horror game. Theo is obviously in no shape to be moving and the tasks he is asked to perform require strength he does not have but yet if he refuses to do them, he has no chance at making it out alive. Story wise, 6 Days dips back into the pool of Cthulhu influences.

6 Days did a fantastic job at adding an ending to the series. It ties lose ends between all four games in a way that is easy to understand yet, it leaves enough open to allow fans’ minds to wander. Much of the plot is left for interpretation as the player sees fit.

With a grand total of thirteen AGS awards, thirty-six other nominations, and declared an “excellent series” in the February 2006 issue of PC Magazine, the Chzo Mythos series is one to definitely play if you are looking at killing a few hours. Depending on how well you solve puzzles, you can finish most of them within one to three hours. I high recommend giving them a chance especially since they are all free. Each one also has a special edition that contains extra bonuses like MIDI files for the soundtrack, concept art, additional storyline files, and commentary by Yahtzee. Originally, the special edition for each game was $5 but since no one was paying for them, Yahtzee made them free as well. However, I felt so satisfied by the series that I feel it is certainly worth a small price. A part of me feels as if I need to send him a $20 bill with a letter simply saying, “Thank you” on it because it hurts.