[For his Monthly Musing, Wolfy-Boey tells us a very personal and touching story about how The Curse of Monkey Island amazed him from start to finish. Want to see your own work on the front page? There’s still time to write a musing blog before the end of April. — JRo]

As a child, my life was quite depressing. The middle child of a middle class family, living in a third world country that never quite had any true social or financial security. My parents fought and bickered almost every night, and I had only one friend, which I eventually lost after changing schools. A neglected and fragile child at home and an outcast weirdo at school, my childhood would not be so unusual in the personal files of some serial murderer. But I never went mad. I did not end up in some insane asylum or some prison cell plotting revenge at the fictional arch nemesis that put me there in the first place. I just ended up being a somewhat weird functioning member of society.

I credit this to videogames. More specifically, a game that amazed me and even shaped who I became to be today:

The Curse of Monkey Island.

As mentioned in the beginning, my earlier years were quite distraught and lonely. Furthermore, the country itself was (and still is) in a depressing state; joy was not a common theme within most homes. My family was no different. Financially, we were quite fortunate, as we came from two privileged families but that made things worse. My mother and father were under constant scrutiny as they had to at least match if not exceed the “standards” set upon their own parents, friends and even complete strangers. Status is unfortunately a big part of our culture. 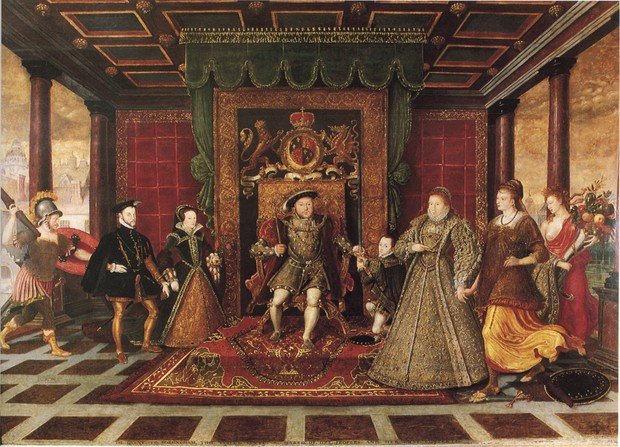 Kinda like this. Only less extravangent, and with comfier underwear.

By default, as their children, my older brother, younger sister and I all had to abide these unwritten laws. I so I did. And this led to even more dissatisfaction and melancholy. I turned to my imagination to subdue my gloom. This made others portray me as an odd young boy, and led to my consequential label as a “weirdo”. My loneliness complimented my sadness, and thus it grew. But that was finally about to change, as a new technological marvel was about to enter our humble home: The Personal Computer. And with it came the answers to my problems, videogames.

Now call it what you will: an escape, a desperate get away, or even an attempt to run away from my demons. That doesn’t matter. All that mattered is that a few moving pixels on a 13’ inch distorted screen made me smile. They took me away to world that never judged, punished, or disciplined my every move. Sure I still worked under the restrictions set out by some programmer or designer, but I felt like I was free, free to just have fun and smile. 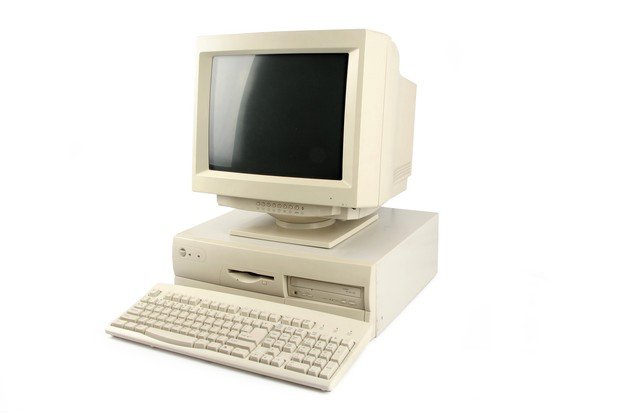 It may sound cliché, but this really was my Portal to a much better world

But while the prospects of games had astonished me, no game had truly amazed me. I have fond memories of playing Megaman X, Comix Zone and even Batman Forever with my brother. All the same, it was still a hobby, a pastime that gave me great levels of enjoyment. Nothing more. But that was all I needed at the time really, something to bring more happiness to my dull existence. And for a while that was all what videogames ever meant to me. It was not anything more than a favourite occupation. That is until The Curse of Monkey Island came along and changed my life forever.

I remember the day it happened very well. I was eight years old, and it was a Friday. I had done well in school earning me a reward, I chose to ask my mother for a videogame. My mother actually liked the fact that I gamed back then. So she took me down to the local videogame store. This time though, I wanted something different. I had played platformers, beat´em ups and shooters and while they were all fun, I wanted something with a bigger focus on story this time. The store clerk suggested I play adventure games, and pointed me towards a more recent release. Needless to say I got what I wanted, but it was not what I expected. 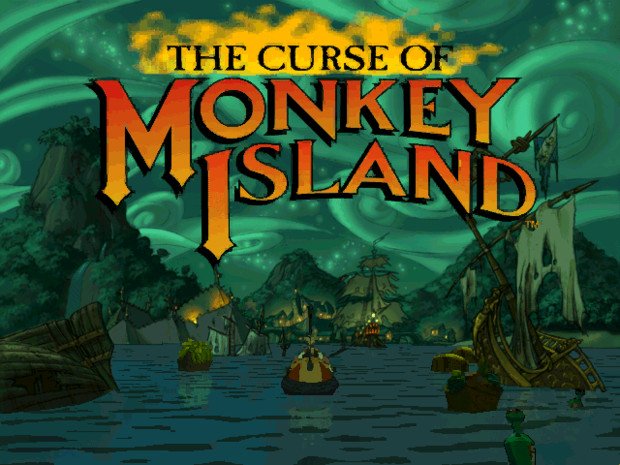 This game was like nothing I had played or even seen before, and that wasn’t even because I hadn’t played adventure games before. Nothing about this game was conventional, especially the concept and characters. For the first time, the backgrounds and items were no longer just static surroundings, and the hero was never oblivious to them. I could examine, use and pick up objects. I could even talk to the other characters, they were living breathing entities with personalities and I could speak to them anytime, even if it served no purpose. I was even able to choose the dialogue, even if it was just pointless babble.

This type of experience was fresh and different to me and it left me in awe. But, it did not amaze me. No, the intelligent puzzles and the explorative gameplay was not what truly amazed me, and it certainly isn´t why this game is so memorable to me. No, what truly amazed about this game was it´s utter refusal to take itself seriously, both in story and concept. This game was about vicious, bloodthirsty pirates, and it was funny!

The hero, Guybrush, was a misfit. As an actual pirate he was terrible. He was week and scrawny. He was neither mighty nor violent. Elaine his lover, the supposed damsel in distress, the captured princess was mightier than him. And they were also incredibly funny. Even the villain, the zombie pirate LeChuck, was hilarious. The secondary characters: Haggas the Scottish barber pirate, Edward the dapper and noble banjo playing pirate, Murray the self proclaimed most terrifying and evil pirate in the seven seas! Who just so happens to be a bodiless undead skull. All were both as wacky as they were funny. 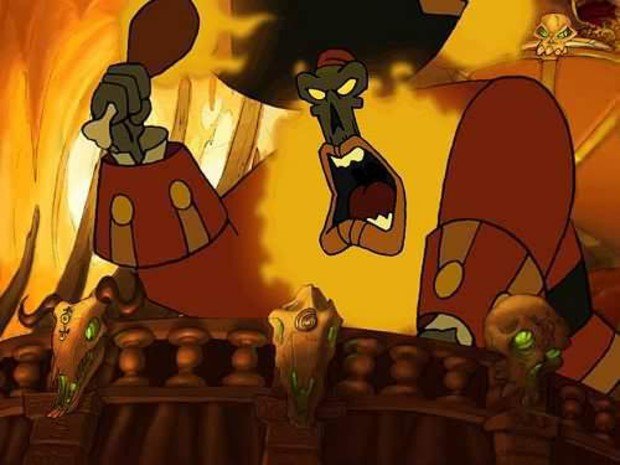 Curse the villains! They never give ye enough slaw.

Even the combat was ridiculous. Insult sword fighting where you must reply to your opponents insult with the correct corresponding rhyme? Brilliant. And the story itself is equally ridiculous. An inept pirate setting out to save his true love from a deranged and obsessive zombie pirate who seeks to make her his undead bride could. And the way it progresses could just as easily be described as a series of simple problems that required a series of absurdly funny solutions.

I have yet to experience any other game that has you feeding a lactose intolerant volcano nacho cheese, so that you may melt said cheese in a pot to use it as a sort of tar to fix a broken ship, all so that you may have some hand lotion. What other game in existence has ever required that the player use any sort of hand lotion in any sort of capacity? None, expect for The Curse of Monkey Island.

Unlike any other game I had played at that time, The Curse of Monkey Island didn´t just make me smile, it made me laugh. 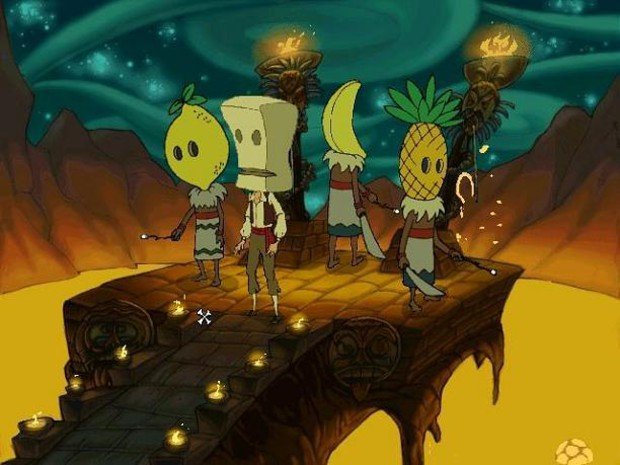 There I was, this nine year old boy raised to follow conventions and ethics that I refuted. Built by countless generations before me who believed and valued different things than I. I tried to run away from them, by escaping to other worlds, but with most games this was limited. Each day I had to return, in mere seconds the world would have to be shattered, and my immersion broken. By turning off the screen my fantasy was gone, suddenly vanished from existence. But Monkey Island leapt out, it leapt out and stayed with me. It stayed with me forever and it presented me with a new way to confront my demons: Humour.

And from then on I had a new skill. A new weapon to combat both my boredom and sorrow. Now even the countless hours spent in the back of the class transformed from misery to bliss. At any situation the world could be transformed into my theatre, men and women into puppets, and I their puppeteer. Ay subject or theme could become amusing, and humour would guide me towards it. The gift that was comedy had saved me. 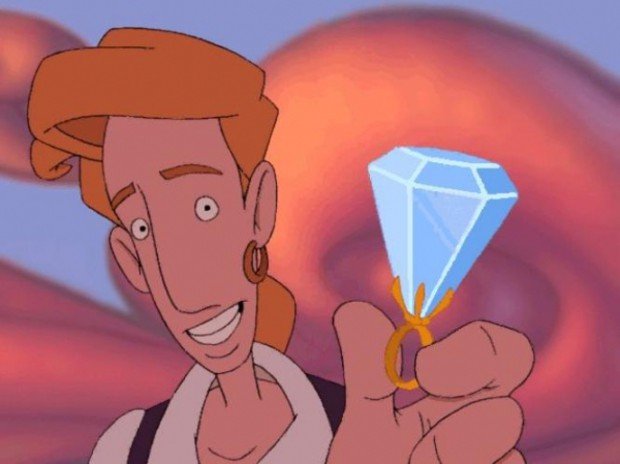 For me? Thank you, I will cherish it forever.

Usually as the credits roll and a game ends, so is our connection with said game. The link we once had is severed, and we are never together again. Everything fades to black and we are left with only a final goodbye: “Game Over”. I eventually finished The Curse of Monkey Island and the credits did indeed roll, but the game was never over. So long as I am breathing now and I continue to breathe, this game will never end. Is it a coincidence that I find it hard to connect with others who do not appreciate or admire this game, this series or even comedy itself as I do?

The fact that any sort of from of entertainment can change a person is nothing short of amazing.