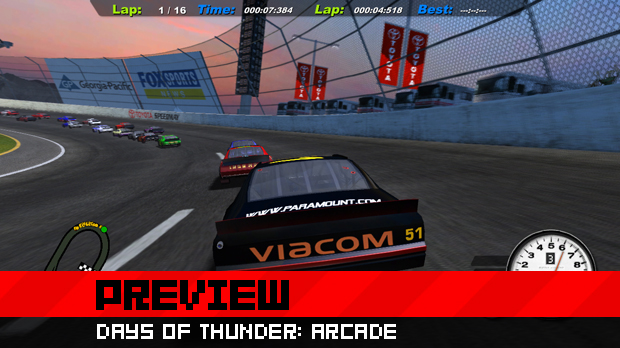 When we hit the turn, at 120 miles per hour, I couldn’t hold it in anymore. Rey was in the front of the race car, his camera hanging out of the window. Michelle, our PR representative, was sitting next to us, and we were both squirming due to the mild g-forces. With that last turn, I finally just…well, squealed.

We were in a Toyota Camry Hybrid.

Yeah, I know. But let’s be real, not many of us get to go around a race track, and I was lucky enough to have a couple of laps around the Toyota Speedway in Irwindale, California. I got to meet “movie star” Michael Rooker, watch some races, eat some pizza, and generally have a good time doing what NASCAR fans do every weekend. All of this was for a good reason, as I was being shown the latest game from Paramount, a downloadable title based upon the 1990 Tom Cruise film Days of Thunder. So between the fun that happened, a very real bit of work was over our heads: videogames.

Hit the jump for my hands-on impressions of Days of Thunder: Arcade.

Interestingly, I was only able to play one race course: Toyota Speedway in Irwindale, the one I was at. Like baseball stadiums and football arenas in other games, Toyota Speedway was accurately designed. It’s a short track, so there were lots of crashes and accidents going on, which makes for exciting moments.

Some of those exciting moments are designed to be evocative of the film. Cars on the track will crash or spin out, causing clouds of smoke to come billowing off the cars. These are called “Days of Thunder moments,” and can be dangerous in a race.

Other elements from the film that show up in the game include Michael Rooker, reprising the role of Rowdy Burns; he will start out as your mentor and race guide, and then return to the track itself. For fans of the twenty-year-old film, hearing his voice in the game is a treat. Other characters from the film show up, but don’t expect Tom Cruise to lend his voice.

Racing around, your car is going to receive loads of damage, so there is a simple pit stop minigame. Pull over to the side, and mash away at buttons to repair the car, refuel the car, and repair the hammer. Short and simple, it gets the job done.

The hammer element of the game is also from the film, as while you drift behind other cars, you’ll build up the hammer meter. When the time is right, drop hammer, and blast ahead.

I was unable to check out the multiplayer, but they promised me 12-player action. There are a few race types you’ll be able to take part in: Quick Race to bounce right in, a Career mode that follows the plot of the film a bit, Time Trial, and the introductory Tutorial. The most interesting mode, which I was unable to play, was Derby, a demolition-type mode.

The game is hard, as even at our best, I never saw a player do better than tenth place in the races. Sure, 16 laps is pretty short for a genre that often reaches 500 laps, but damn, I’d like to think I’m better than that. The game will run races going up to 105 laps for longer races.

I didn’t try it out, but motion control is supported for the PS3 version.

Part of the problem may have been the car I was driving. Days of Thunder: Arcade allows players to modify their cars. While nothing major and nothing that has not been seen before, the car editing mechanics range from changing to the color and design of your vehicle to three base types of cars and decals.  I loved the decals from other Paramount IPs, such Gladiator, Transformers, and G.I. Joe; however, I was told these will not be making the final game. I hope that’s not true.

You’ll be earning performance points to modify your car, and hopefully start winning these damn races.   Points can be placed in Speed, Acceleration, Handling, Durability, and the Hammer meter. So, if you are like me, and want a quick-boosting, high-speed, low-durability car, you’ll be able to do that.

In the end, here’s honestly how I feel about the game. It’s early — coming out this summer — but it could use a little polish. However, the races themselves were fun, and I think that if they buff up the car editing, make sure the online is tight, and offer a lot of racetracks, we could be good to go.