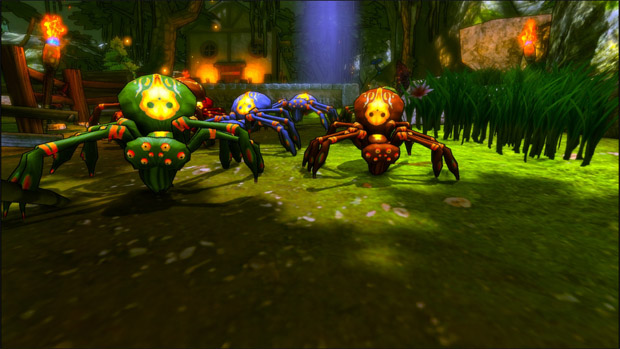 Dungeon Defenders took over my life for a good week when I initially played the Xbox Live Arcade version, but sadly I never ended up playing it cooperatively as much as I would have liked. After some peer pressure and a daily Steam sale, however, I finally moved to the PC for the co-op and the DLC.

While there has been plenty of cheap and free DLC for the popular co-op action RPG tower defense title to date, Trendy Entertainment recently released the first of four big paid DLC packs on the PC and consoles: The Quest for the Lost Eternia Shards. Let’s take a look at the first pack, shall we?

The Quest for the Lost Eternia Shards Part 1 ($3.99, 320 Microsoft Points) adds a new campaign mission, Mistymire Forest, a Portal and an Uber Monster Fest challenge level, and a PvP Battleground. The PvP Battleground map is pretty self-explanatory and the Uber Monster Fest challenge is all about fighting off an über amount of monsters, but the other two levels can be explained simply as “Holy crap spiders fuck!”

Our team consisted of myself (Level 68-74 Ranger during DLC play), my dreamy colleague Alasdair Duncan (Level 60s Squire), and UK community members Gemsi (60s Squire) and Gandysampras (a sickly child and level 34-44 Apprentice at the time).

The Mistymire Forest campaign mission continues the story of Dungeon Defenders as the four heroes venture forth to hunt down the first of four Lost Eternia Shards that, when combined, vanquish some lurking evil. In other words, you place defenses and kill a lot of monsters every wave. The map itself offers a lush, large, and colorful locale that is perhaps best described as a smaller Glitterhelm Caverns with trees. A central area houses four Eternia Crystals and north, south, and two eastern approaches need to be blocked off from the incoming waves. At least, that’s what you think.

With a rather liberal amount of Defense Points to work with, locking down the four approaches with spiked blockades and various traps and towers is easy enough. Since our team had just started going through the campaign on Insane difficulty with relative ease, we figured we would try it on Hard right off the bat. How hard could it be? Little did we know about the spiders…

While the regular wave spawns and ogres can be held off well enough with the usual defensive mix, spiders are a new type of enemy with three annoying attributes. They drop from the sky all over the map (i.e., behind your defensive lines), shoot balls of web at you that reduces your movement and attack speed and disables all abilities (including repair and upgrade), and they are spiders. 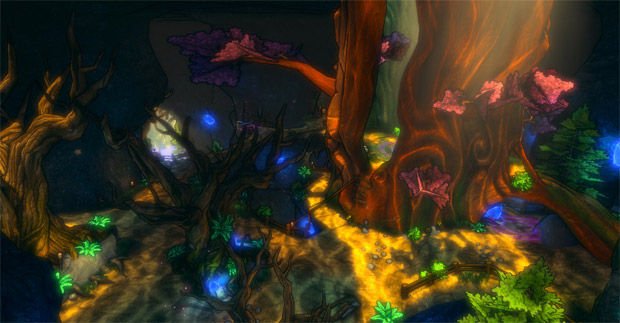 Spiders make a beeline for the heroes and the defensive structures, but thankfully they leave the Eternia Crystals alone. On the harder difficulties, however, they have quite a lot of health and do a lot of damage — enough to kill you multiple times if you get overwhelmed. Moreover, they drop behind your defenses and destroy spiked blockades and central area towers to open up the path for wyverns and ogres to ravage your Crystal cores. Like regular enemies, spiders can have elemental resistances meaning you can’t just place lightning towers everywhere and leave it at that.

After dying multiple times and finally lowering the difficulty in shame, we reached the Spider Queen boss of Mistymire Forest. She poops out spiders and shoots web everywhere after she lands in the central area of the map, but with a Squire on your team to tank the boss and a few ethereal spike traps to lure her to, she is a beefy but not super hard boss.

Make no mistake, though, this is end-game content meant to be played with high level characters if you aim to play it on anything other than Easy. As such, it’s a fun mission that will take you a fair amount of time to perfect and beat on the higher difficulties, even if the spiders can become very annoying when they keep dropping behind you just as you try to repair or upgrade key defenses from behind blockades. As an added bonus, there are a couple of “Shroomite” familiars on the Mistymire Forest map — elderly mushroom men with monocles that you can pet for mana and health. Their endearing quality almost make it worth dealing with the spiders. 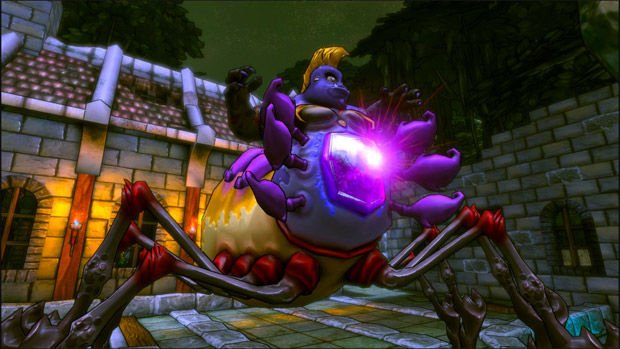 The Portal Challenge is a variation on the Warping Core challenge, set in Mistymire Forest. Instead of defending a warping Eternia Crystal, you defend a portal with a small, set amount of hitpoints à la Orcs Must Die! Once all of the portal’s non-regenerating hitpoints are gone, you lose. The challenge map only has one type of enemy to deal with, but they are spiders (of course it had to be spiders). This time around, most of these spiders simply spawn in waves at the regular spawn points as if they were normal enemies while a handful of them will still drop all over the map. They run straight for the portal, so unless you have enough players (3-4 ideally) there’s no way you can defend the portal from every approach.

Because the portal warps across the map — though mostly near the end of a wave — there is not much point in creating defensive lines except perhaps around the spawn points to buy yourself time. The portal never warped right next to the spawn points in our games, so there are likely some areas where it just never warps to. We ended up placing explosive traps all across the map, which worked well enough except for the fact you then have to repair every trap between every wave. It also seemed as if the traps only left a few locations available for the portal to warp to, making it warp to the same spot five times in a row — something that might become a good high difficulty trick to exploit if it does work like that.

The Portal Challenge is a fun enough distraction, and definitely better than the rather repetitive Great Turkey Hunt! DLC mission. Our team has come to hate spiders with a passion, though, so I’m not sure if we’ll be revisiting this challenge any time soon.

The Uber Monster Fest challenge is about one thing alone: surviving and killing all monsters before the time runs out. This is a mode meant for eight players, and one you shouldn’t really attempt with just three of your regular co-op friends. The map offers an opportunity to block off three narrow approaches to a central platform inside a tree, but you’ll need many players and a lot of DPS output to hold off the waves long enough to build up solid defensive lines.

You also only have 10 lives that are shared between all players, so this is arguably the worst place to try and power-level an alt character unless you have seven friends in the 70s range. Still, it’s pretty fun and action-heavy and something to play with a larger group when you’re in the mood for it.

If you pre-order all of the Quest for the Lost Eternia Shards DLC as a pack, you will also gain early access to the new Nightmare difficulty. Since the Insane difficulty can be a relative breeze with high level characters, we figured we could try out the second map — Foundries & Forges — on this new Nightmare difficulty. We died on wave 1. Thinking it would be easier on The Deeper Well, we were only confronted with failure yet again. To be sure, Nightmare is indeed ridiculously hard.

From what I could tell during the rather chaotic fights for survival, Nightmare nerfs all defenses (e.g., an explosive trap with a stat-buffed 18 counters now only has 8 and a default trap radius) and Pet damage output (e.g., 250 damage instead of 1000). Enemies of the purple variety spawn right from the start, and although the very first group of enemies on The Deeper Well is perfectly manageable, a second group consisting of an 800k HP ogre, mixed with spiders that drop from the ceiling and stun you, is slightly less so.

Suffice it to say, Nightmare is really for the super high-end and/or skilled groups of players who are desparate for a challenge. Unique to Nightmare is the Hardcore modifier in which you are unable to respawn. I’m ashamed to say I’ve been unable to actually clear a level on Nightmare, so I haven’t been able to verify if you can still play it with the Pure Strategy modifier once you beat a level. If you can, I expect that to be a true and utter nightmare to pass, though. With the entire game to play on the new Nightmare difficulty, this gives you a huge amount of replayability provided you can stand a chance of surviving it. 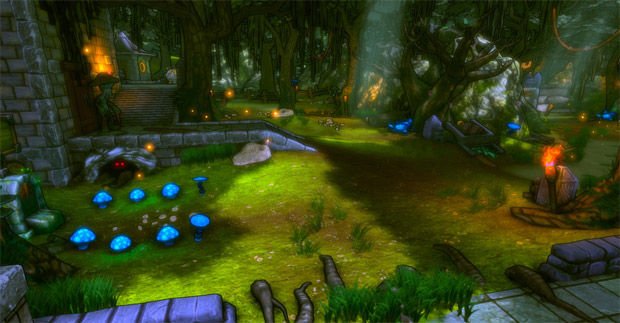 All in all, the first part of the Quest for the Lost Eternia Shards offers a varied package to keep veteran players occupied for plenty of hours. Mistymire Forest can be a bit hit or miss depending on how well you can deal with the frustrating new spider enemies, but it is nothing if not a challenge. The Portal Challenge is fun for a few playthroughs, but the Uber Monster Fest and PvP Battleground really depend on how much you like big team combat.

If you’re content with just playing with three other friends once in a while, this DLC will really only give you the one campaign mission and Portal challenge to play with them, and new “Mythical” quality loot plus a bunch of new weapons. If you are more of a casual Dungeon Defenders enthusiast in general, I wouldn’t say it’s worth pre-ordering all of the DLC just to get early access to the Nightmare difficulty since you’ll only die a lot with lower level characters.

However, if the trailer is any indication, the four DLC parts will give us plenty of new and varied levels to play with to make it worth picking it up as a pack while it’s currently 25% off as a pre-order deal. If you are a hardcore Dungeon Defenders veteran, the Nightmare difficulty and the new maps of the first part will extend the experience for a long time — probably long enough until the second part of the Quest for the Lost Eternia Shards DLC is released. With Trendy Entertainment’s current track record for DLC and updates, it’s a no-brainer to simply buy the entire pack for a few more weeks or months of co-op bliss.