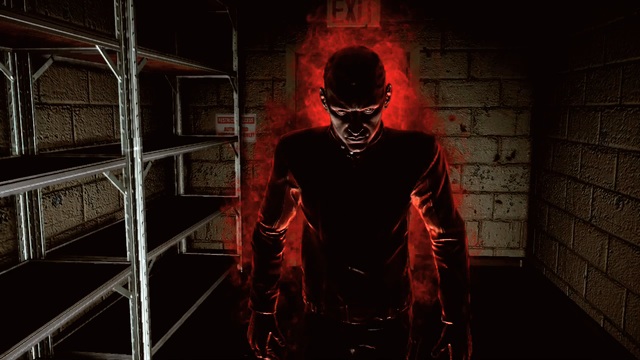 Let me first get one thing out of the way — Day One Studios’ upcoming first-person shooter is called FEAR 3 (or F.E.A.R. 3). No fancy “3” as an “E” business here; I’ve been assured that the “3” in the title is for logo and marketing purposes only. So by all means, get all of the “l33t speak” and FE4R jokes out of the way before continuing.

Second thing you should know is that this preview may very well be a spoiler for those who’ve yet to experience last year’s FEAR 2. It would be impossible for me to set up the narrative for the third installment without referencing what happened at the end of the sequel, as FEAR 3 takes place nine months after its predecessor. (Perhaps even that in and of itself is a spoiler.)

Feeling good about that? Read on for the first details and impressions of FEAR 3 and its “divergent co-op” experience.

Here’s the spoiler: FEAR 2 closes with the series’ resident raven-haired creepy gal, Alma, being impregnated. It appears that nine months is about the gestation period for a paranormal superpower, and FEAR 3 begins as at the spine-chilling peak of Alma’s pregnancy. Anyone who has experienced the spectacular miracle of child birth knows that a woman in labor is a sight to behold, with the mother in intense pain as she pushes through the birthing process. There’s grunting. There’s screaming of profanities. There are demands that are growled. Now imagine, if you will, this process happening to an all-powerful psychic monster.

It’s not pretty. As Alma begins her labor, her contractions send supernatural shockwaves through reality. The city shakes, buildings crumble, unspeakable monsters rip through into our physical existence. Bad scene all around.

FEAR 3 re-unites brothers Point Man and Paxton Fettel, the offspring of the otherworldly matriarch in question. The game’s story brings them together for what Day One and Warner Bros. are calling a “divergent co-op experience,” with each player taking control of one of the two wildly different characters. 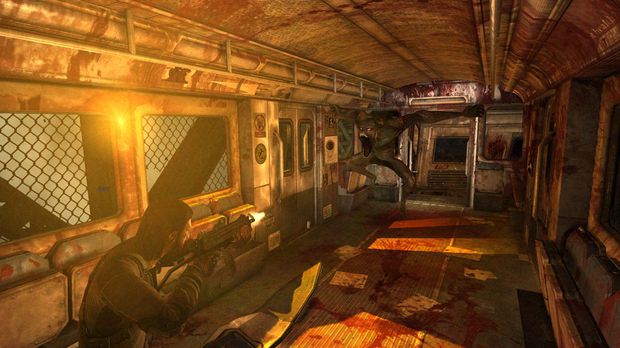 Point Man lends himself to that classic first-person feel, a super-soldier known for his use of big military weapons and a slow-motion ability, a hallmark of the original FEAR. Slow-motion will affect both Point Man and Fettel, making it a useful skill for both players if timed correctly.

Fettel, having been killed by his brother in the original, is a spirit that comes with his own set of paranormal abilities. He can fire blasts of paranormal electricity from his hands to take out enemies, for example, or use a “suspend” ability to lift and hold an enemy in place so that Point Man can target from afar.

Perhaps more interesting, Fettel can also navigate in and out of human enemies, possessing them to take advantage of not only their skills and weapons, but also to gain the tactical advantage. In one instance we see Fettel phase into and posses the body of a sniper; in another, he takes control of an enemy soldier in order to pilot a massive mech. 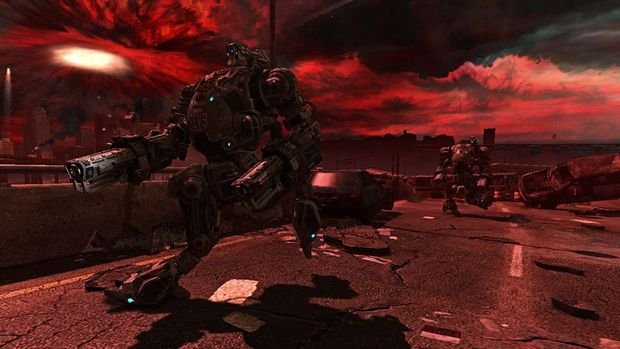 Fettel also has the ability to see things in the environment that Point Man cannot. In the hands-off demo we saw, certain doors only appeared as red on Fettel’s screen. Using a blast of psychic energy, the path was clear for Point Man to pass through, often leading to items like guns or ammo. Depending on how you decide to play (and how closely you’re paying attention to the game world), this can lead to branching paths, as well.

This “each player sees the world differently” isn’t just limited to gameplay, either. The visuals, depending on which brother you’ve chosen to play as, are drastically different. Playing Point Man, the game has a classical first-person shooter look, with a greener, more military feel. As Fettel, the world is bathed in a red filter, giving it a distinct ethereal feel.

FEAR 3 also stresses cover over simply blindly running into and blasting your way into conflict. Much like in the previous games, objects in the environment (like tables, for example) can be knocked over to create these cover opportunities. Or you can simply duck behind a slab of concrete strategically placed by the game’s designers for a brief respite from a firefight. 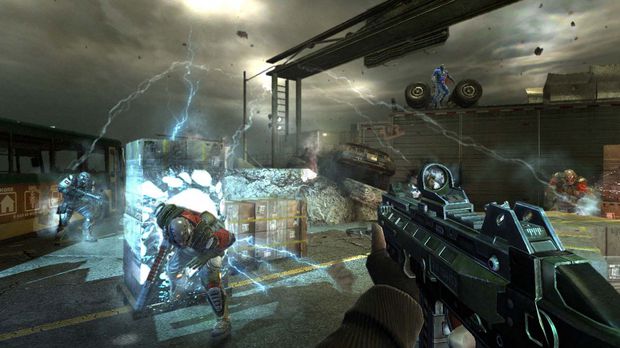 But new to FEAR 3 is the ability to quickly jump from one side of a piece of cover to the other. With the push of a button, players can hop an object; pressing that button again (almost immediately) will have them quickly turning and entering cover from the other side. You’ll need this ability, too; Armacham has harnessed some of Alma’s abilities, giving them the capability to phase-cast. This let’s them come into the fight from all directions at any time.

FEAR 3‘s cooperative mode will be accessible both online and off, via split-screen, with full drop-in and drop-out. Want to play alone? No problem, but you’ll be relegated to playing as Point Man throughout the story; there’s no plans to ship with a single-player Fettel campaign at this time.

We hope to see more of, and maybe even get some hands-on time with, FEAR 3 at E3.