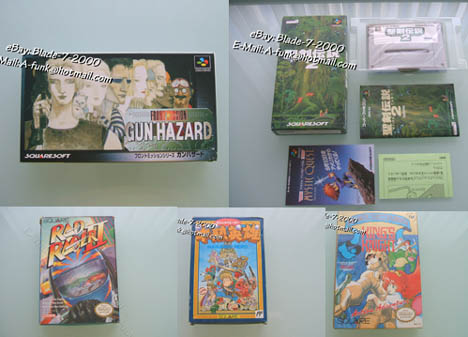 Squaresoft fans: You’ve been a bit outspoken lately due to the direction the company has been taking as Square Enix, but you know you’ve got a soft spot for the classic Squaresoft titles. If you’re the real deal, you’ve got chocobo plushies on your desk and still whip out Secret of Mana from time to time. And you might have a couple of Final Fantasy soundtracks. If you’re one of the Squaresoft faithful, this recent eBay auction might appeal to you.

Over 100 items from the good ol’ days of Squaresoft were auctioned off by a “long time fan and collector” that needed the money. It’s a sad story, especially after seeing what they auctioned off. Old Square gems like King’s Knight and Rad Racer join all of the Super Famicom releases, US releases, and many of the PlayStation titles. I have no idea why Final Fantasy VII is missing from this collection, though.

Judging by the auction page, it looks like the auction was successful. Did they spend $10,845? Shipping was included!

Would this stuff be worth that to you? Me? Not so much. The soundtracks are fakes, for one.