Control is the sort of game that you don’t stop thinking about when it’s finished. It invites retrospect and analysis — a thorough rehashing of everything you saw and read along the way, all in pursuit of connecting every little thread to make one cohesive world.

That’s a rabbit hole I went down. After reviewing Control, I had more questions about, well, a lot of things. At PAX West, I had the opportunity to get some answers. I sat down with Remedy Entertainment narrative designer Brooke Maggs to talk about some of the stuff that was still on my mind.

Nearly everything after this point is a Control spoiler in one way or another.

The result is this semi-coherent interview where I hop between super-specific questions with no real regard for segue or flow. I have no regrets. This was for me, not you. I asked what I wanted to know. Maggs was kind enough to go along with all of it.

[The following interview transcript has been lightly edited for clarity and flow.]

Destructoid: At the very end, Jesse stops Dylan from destroying the Board. What’s her primary motivation here? Is it love-motivated, and she’s cleansing her brother and saving him from the Hiss? Or is it in the interest of saving the Board and the Bureau? Immediately after the credits, we cut to Jesse in her office, clearly taking her new role very seriously while her brother lays in a coma.

Brooke Maggs: I think it’s a bit of both because for a long time, she’s been convinced that her brother’s gone. She doesn’t know where he is. Now that she has him, she finds that he’s in cahoots with otherworldly forces. I think she desperately wants to have him back in some way, almost in any way it takes. I think the way she approaches him — there’s some love there but he’s also the face of the enemy. I guess in her duty as the director is to protect the Bureau; her duty as a sister is to try to get her brother back. I think those conflicting things make it interesting.

Destructoid: Is Jesse prone to being corrupted or is she impervious? Trench admits that he was losing control leading up to his corruption. The Bureau had to build a containment chamber to house Northmoor. They don’t have a great track record. If Dylan could be corrupted, Jesse could too, right?

Maggs: Ummm…that’s interesting. At the moment, no — she’s been able to resist corruption which has been largely thanks to Polaris. 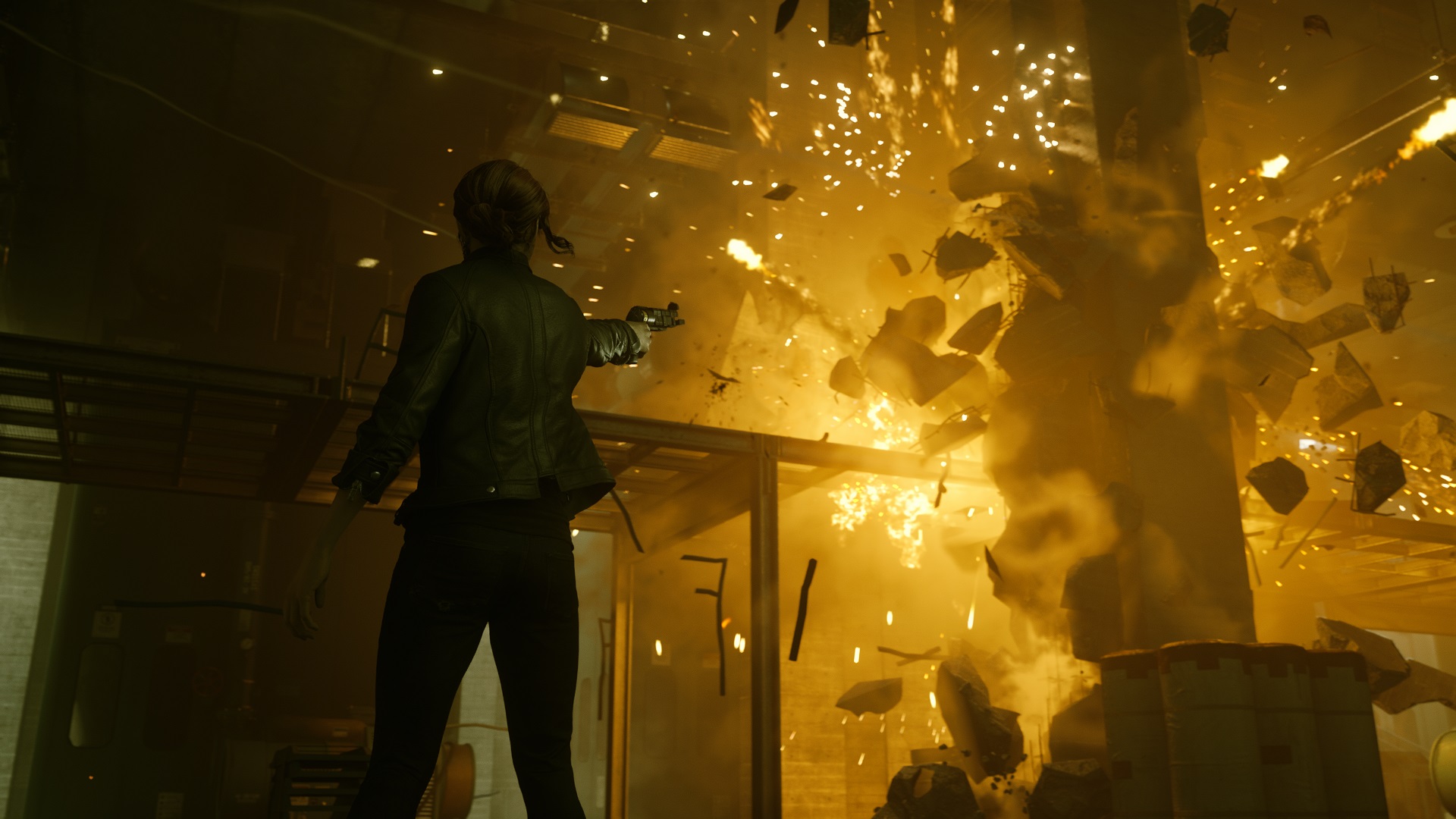 Destructoid: One of the collectibles mentions that “Places of Power could likewise be formed by the simple power of sustained, collective belief.” What kind of location do you imagine would fit the criteria? My brain kind of went to like the Vatican.

Destructoid: How would the Bureau contain and study them? It’s not like an object that they can physically transport.

Maggs: It’s really interesting that they moved into one. They study the Oldest House as much as it’s a Place of Power as well. Places of Power could maybe be created by Altered World Events (AWEs) as well. They tried to recreate Ordinary to try to understand what makes them a Place of Power. That’s a good example of how they are created. 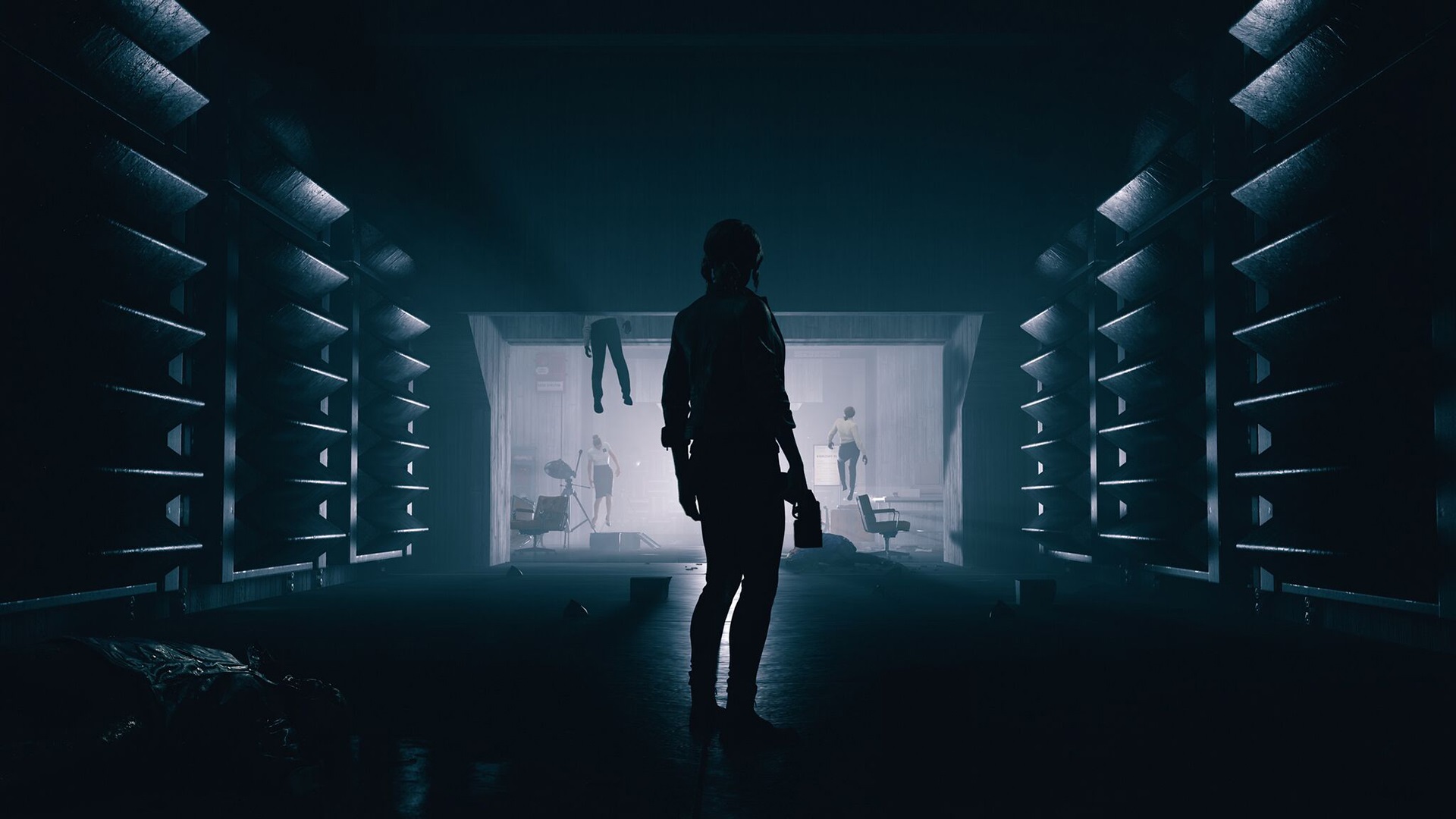 Destructoid: So, the real treat for Remedy fans: The revelation that Alan Wake and Control share the same universe. What went into that decision? Was it something that fit so perfectly that it was the plan all along? Was there some hesitation to sort of preserve Alan Wake and let it be its own thing?

Maggs: When we started with Control, we were very much creating a new IP and a brand new world. We worked a lot on who the Bureau is, all these Objects of Power, AWEs, Altered Items — how all that works. Then, from building that up, we realized that there could be connections. Whether we wanted to entertain that, I think, was more of a decision from Sam Lake. It was his decision to start drawing connections to the worlds.

Destructoid: I suppose Alan Wake is a small hyper-focused look at one AWE among many in Control — like a pawn in a bigger game. It really opens the door for Remedy to make more side stories that vein. Is that something you’ve thought about, making more games or telling more stories that detail weird and cool AWEs?

Maggs: It’s definitely something we’ve thought about. One of our expansions is called “AWE,” so it is a possibility, yes. 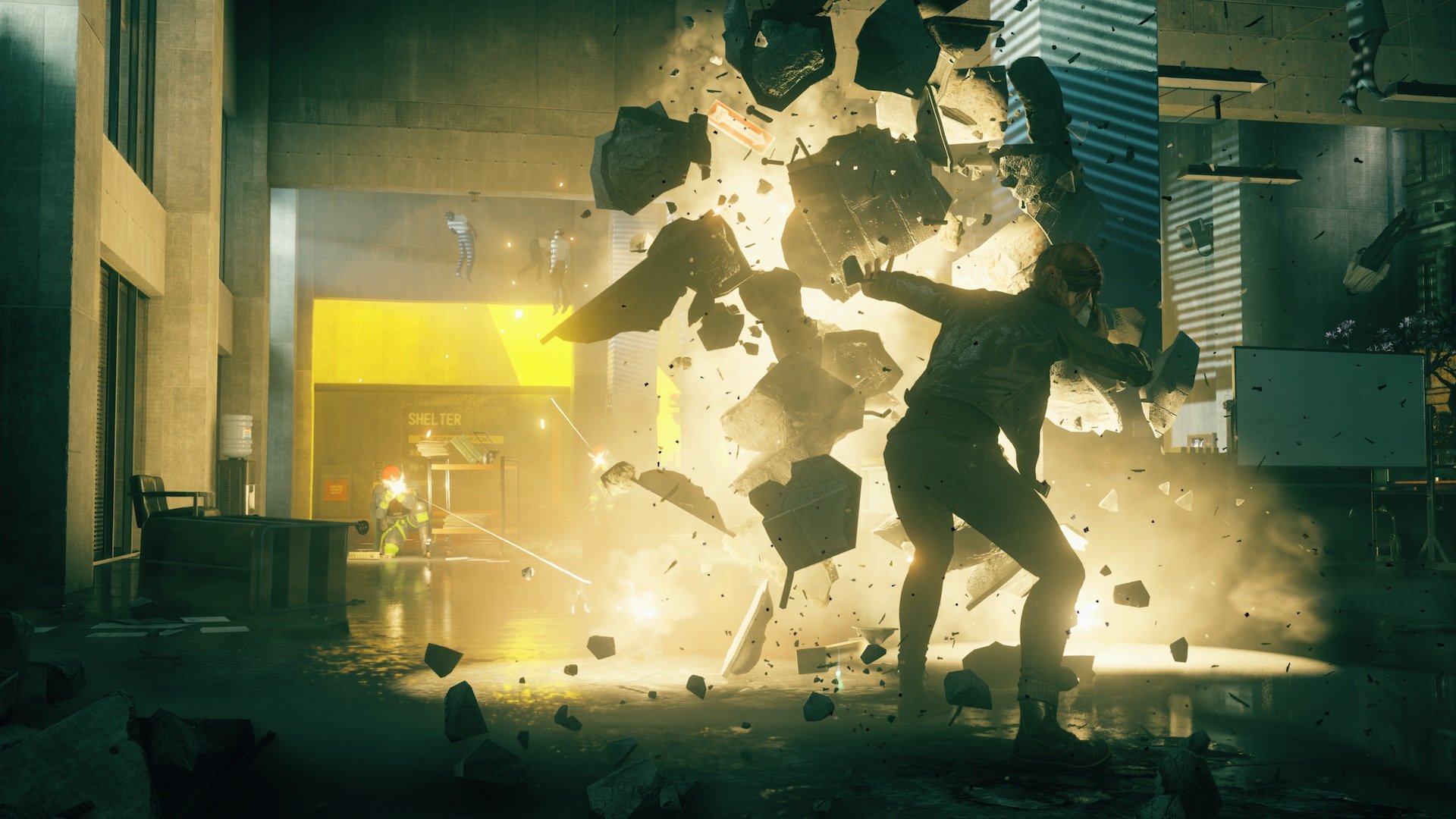 Destructoid: Alan Wake has been flagged as a potential parautilitarian. However, Trench also says that Prime Candidates 1 through 5 were all dead ends, and that Jesse and Dylan are the two the Bureau is banking on. Is Alan one of those five and his potential sort of ends there? Or is he possibly more powerful than the Fadens, especially since he’s able to bind himself to the clicker?

Maggs: No…no. The connection doesn’t run that deep, I don’t think. [Editor’s note: Jeez, Brett’s such a nerd that she basically had to say “Dude, you’re reading way too far into this.”]

Destructoid: Do Quantum Break or Max Payne take part in the Control universe at all? Maybe I missed some stuff but I don’t remember seeing anything that hinted toward them. Why not? Because Remedy doesn’t own those properties like you own Alan Wake? 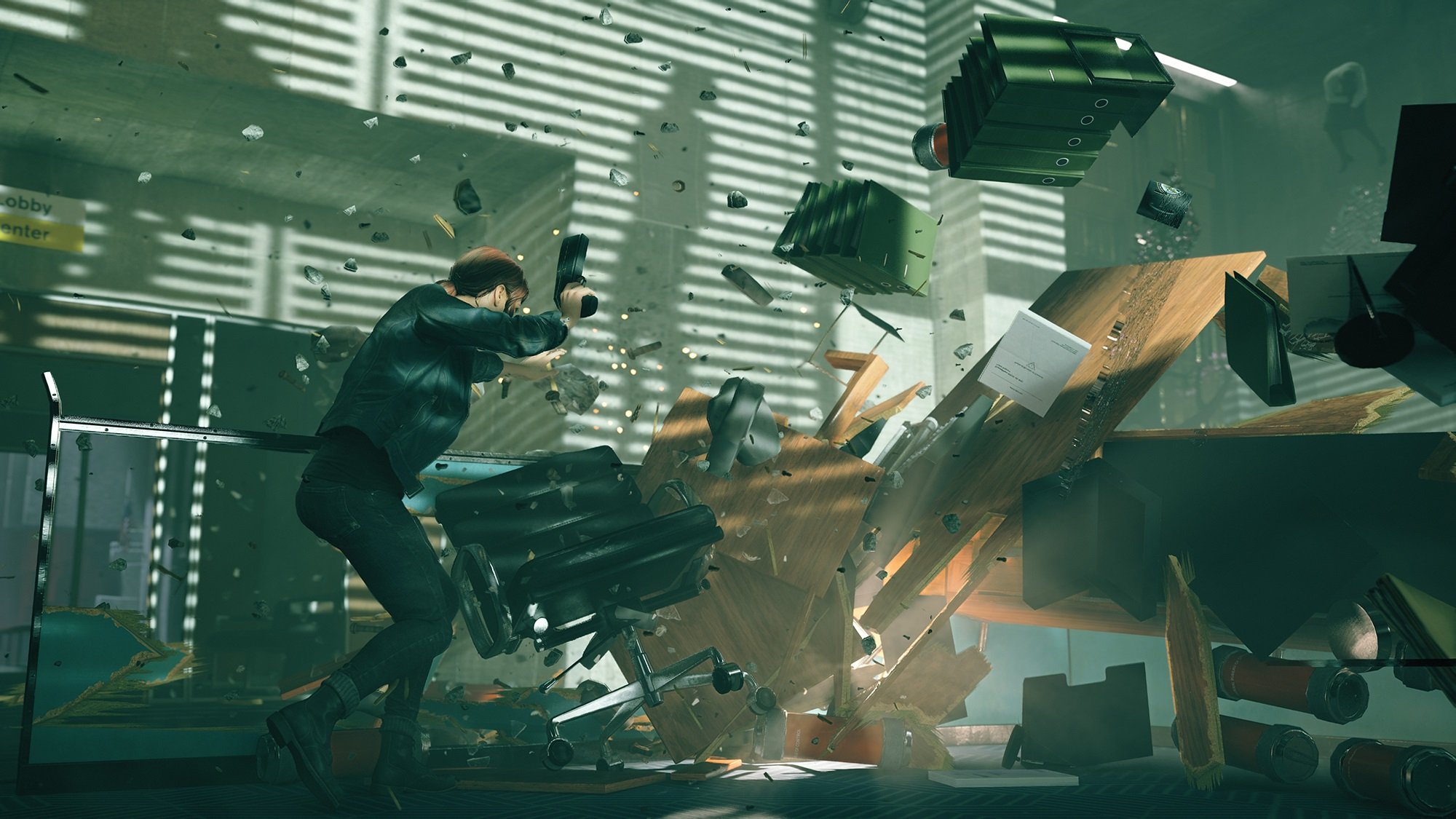 Destructoid: A lot of Control’s coolest moments weren’t necessarily found along the critical path. I really loved the threshold that was full of clocks and the fight against the anchor. Are there any examples that stick out to you of things that got cut, where it’s a mundane object used in an unsettling way? I figure there’s probably at least a few considering the prominent role mundane objects play in Control.

Destructoid: As someone who’s responsible for this narrative and this world, how tough was it seeing all the pre-release stuff that never really accurately represented what Control was about? It’s a game that doesn’t really lend itself to high concept pitches because everything that’s special about it is convoluted and minutiae-focused. I still have a hard time describing Control, which has never really happened before with a game that I love.

Maggs: That’s interesting. One thing we really wanted people to understand about Control is that it was going to be an open-ended world. It’d have main missions and side missions. The gameplay would be totally different. One thing that we were kind of resting on is that people trust us with story. So we didn’t necessarily need to go “And here is what the story’s about.”

What we actually found was a harder message to get across was that this wasn’t going to be a linear story like a lot of our previous games. Control does a lot of other things in terms of physics, the abilities, gunplay, the open-ended metroidvania-style world, using levitate to access new areas, being able to talk to characters — these are things we haven’t done in a Remedy game before. Actually, I think it must’ve been a tough decision to [figure out] how to convey that the play was going to be different, and then start talking about the story. But, I remember when we were talking about the story trailer and I was like “Can we talk about the story now?!”