The Danganronpa series has arguably been Spike Chunsoft’s biggest in recent years.

With three games, two anime series and a handful of light novels under the belt, this colorful take on murder mysteries has blown up since its official reveal as Distrust on the PlayStation Portable. And now, the third mainline entry in the series, Danganronpa V3: Killing Harmony, brings despair to all on PS4, Vita and Steam this September. And if you know me even a little, you probably guessed I’m as hype as can be.

A demo for the game recently released on all three platforms. Since it’s non-canon and doesn’t spoil anything in the main game, I figured I’d take a look at it with our own Mike Sounders. He hasn’t tried anything in the franchise yet except two episodes of the anime. That way, you can get a balanced point of view from both the average guy and the weirdo.

He’s the weirdo, I swear.

Bass: So, Mike, if you could sum up your experience with the demo in one word, what would it be?

Mike: It was… interesting to say the least.

Bass: That’s more than one word.

Bass: [Laughs] So, you mean it was too quirky for your taste? Character designs are certainly out there in this series!

Mike: The designs themselves weren’t too quirky so to speak, and a lot of the personalities, or at least what I gathered, weren’t too uncommon either. One of them had to be one of the most vulgar characters I’ve ever seen in a video game though, and that one caught me off guard.

Bass: The inventor, right? Miu Iruma. I really enjoy what we’ve seen from her so far, the contrast between her overconfidence and insecurities has a lot of potential if played right. I’d say her, the main character and the dictator were my three favorites from what we’ve seen in the demo. 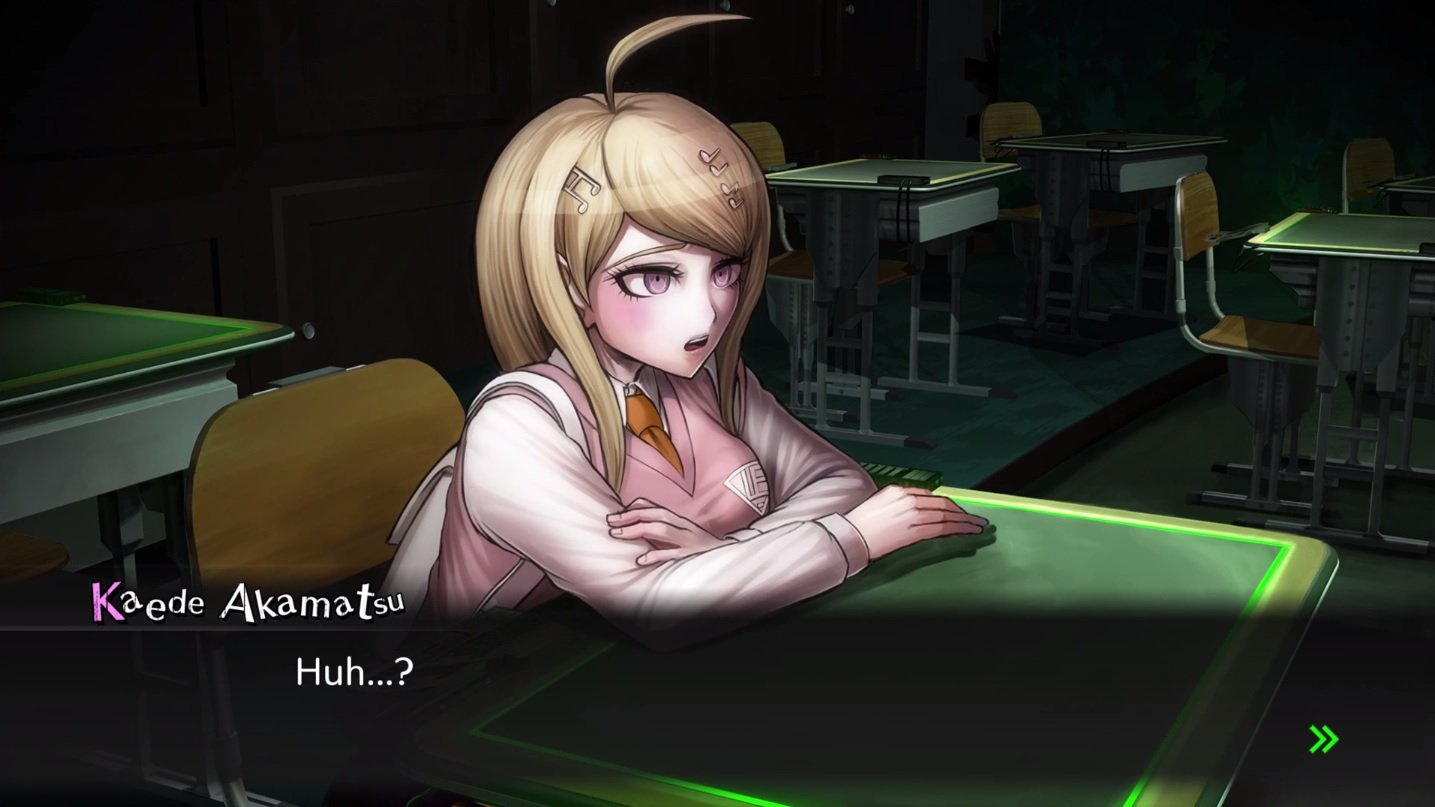 Mike: Yeah, the main character and the dictator were cool, although I wish a couple of other characters had a little more time to shine? Robot man and the bug guy felt like they didn’t really get a lot of screen time in comparison to most of the cast.

Bass: I get what you mean. In these games, some characters tend to get more time in the spotlight simply because they get to survive for longer… but I don’t think this necessarily means these two won’t get their fair chance in the spotlight in the main game. K1-B0 seems like one that could get far, but his mysterious robot origins were probably too much for a demo. Another character that they didn’t really get into was Maki, the caregiver. I’m sure since the other games’ protagonists will be out of the picture in the final game, these new ones will get more attention. It’s hard to tell how much of what we’ve seen of their introductions and all will appear in the actual game to begin with.

Mike: Wait, the other protagonists aren’t in the base game? I have conflicting emotions now!

Bass: Nope! They both have a conclusion set after their respective games, that in a controversial move ended up being an anime series instead of a game. In this case, both of the old protagonists and the “victim” aren’t from this game proper, which is a good way to make sure returning people know that they’re not being spoiled in my opinion. Do you feel like this might confuse new players? 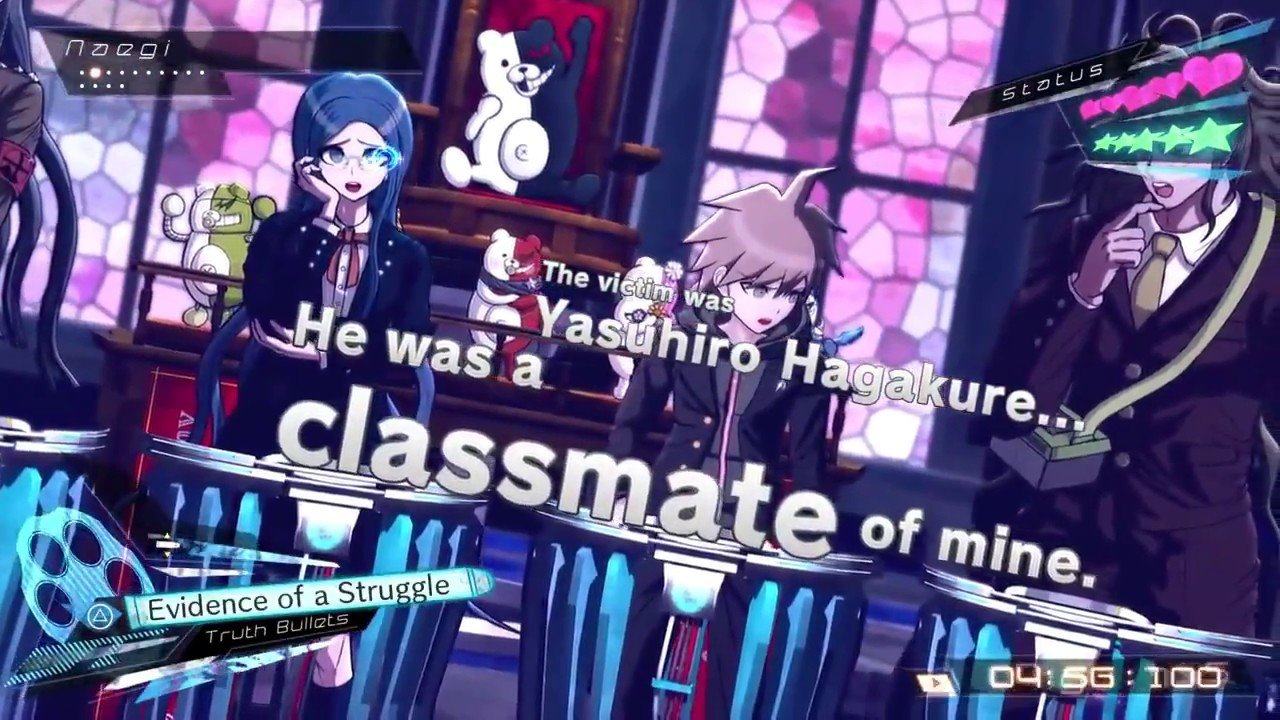 Mike: It might. Otherwise, I guess it does a fairly good job at representing what the actual game is? The art style is nice, the characters were diverse and interesting, the investigation was like a more open Ace Attorney. Although that trial at the end had some issues.

Bass: Oooh, we’re getting into the nitty gritty now. I guess we’ll start with the issues you had with the trial, then.

Mike: So for those that haven’t played it yet, during the ending of the demo, you get thrust into a class trial, where five different mechanics are used. The first one is basic Ace Attorney with a twist. You’re listening to a single fluid conversation, and need to point out the contradiction. The twist, however, is that you’re in a shooter up with a time limit, and need to shoot the contradiction. Hitting the incorrect statement, using the wrong evidence, or hitting obstacles will reduce your time left. Which is fun enough, I assume it’s in every entry before right?

Bass: Right, though this time around they added a few twists to the formula. The basic concept of having to shoot your evidence at the statements like an on-rails shooter is the same. Slowing down time to make this easier with the simple press of a button was also in the first two games. They did add a critical hit mechanic and the much more chaotic version where a lot of people are speaking simultaneously. The demo was understandably on the easier side, but I can see the latter becoming super difficult as the amount of evidence increases in the tougher cases of the main game. Is this what you had an issue with? 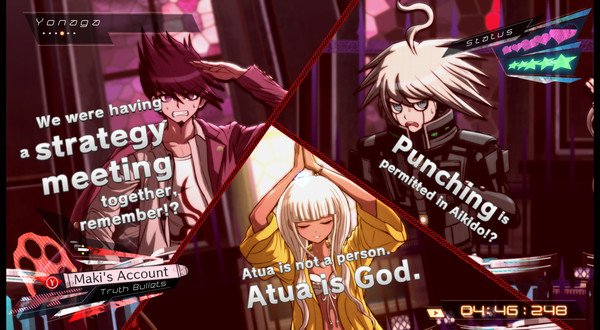 Mike: Kind of. There were two parts of it It was the multiple people one that I had an issue with the most. Even for a demo and with just three testimonies, it felt very chaotic, and easily the hardest part of the trial. While there was a tool to deal with it, the slowdown, it’s still limited. On a smaller screen like the Vita, I’m sure it’s easier to catch everything at once. But for myself, using a PC monitor like a foot away from me, it meant actively taking my eyes off one conversation to focus on another. In short, I ended up looking like this for the first three loops.

So yeah, of the 5 mechanics, it was easily my least favorite of the group as a result.

Bass: [Laughs] Yeah, it was the hardest to get a grip on for me too. I ended up focusing on each person’s statements, then looping over and focus on a different person. That’s not the most efficient, and people with better multi-tasking skill would probably fare better, but I felt like that was the best way to handle that chaos. I doubt this mechanic will be my favorite part of the game, but I am totally down with the new ability to lie by holding the shoot button until the meaning of evidence is reversed. Now, this has a lot of potential!

Mike: Yeah, lying seemed cool, although I didn’t quite get how it would work in the main game? Is it its own separate section, different from finding contradictions, or will it be an active mechanic you have to be aware of? If it’s the latter, then as someone who regularly fails in Ace Attorney, may god have mercy on my soul. It was the only other thing I’m a little iffy on. 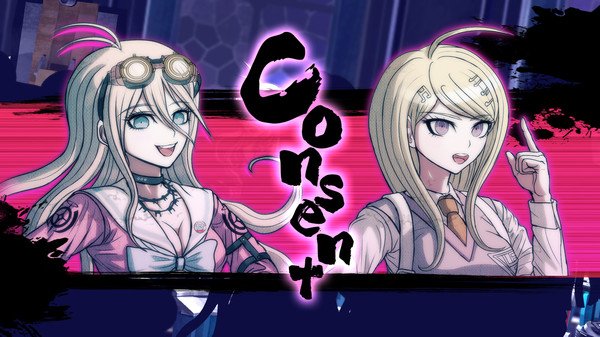 Bass: That’s definitely an active mechanic. At first sight, sure it seems like this doubles the amount of evidence, but I trust the team enough to make the parts where you should lie feel obvious. I was only ever genuinely confused once in the first two games. On the meat bone, everybody. That’s still a lot less than how trial-and-error Ace Attorney could feel at its worst. Anyway, how did you feel about the minigames? There were two in the demo, one where you had to dig up the relevant evidence in a limited amount of time, and a driving minigame.

Mike: I really liked both. It was clear with the driving one that it would get harder by making letters easier to miss, adding more obstacles on the road, adding more dangerous drivers, and possibly more fake answers at the end of the road. I’m not too sure how the digging one will go, although I’m sure it will add more fake pieces of evidence, and possibly more colors? Easily the highlights of the trial for me.

Bass: Cool. Yeah, I liked them both as well, though driving gets the edge for me. So delightfully retro. Digging can definitely get harder with more colors or a layout with more individual blocks, the layout we had was pretty generous with huge chunks you could get rid of at once. I do prefer the regular courtroom gameplay myself, but they’re a nice change of pace that provides variety. Alright, before we wrap this up, I want your hottest previsions. Time to predict three people we expect to survive, three people we expect to die, and who we predict will end up being best boy and best girl. 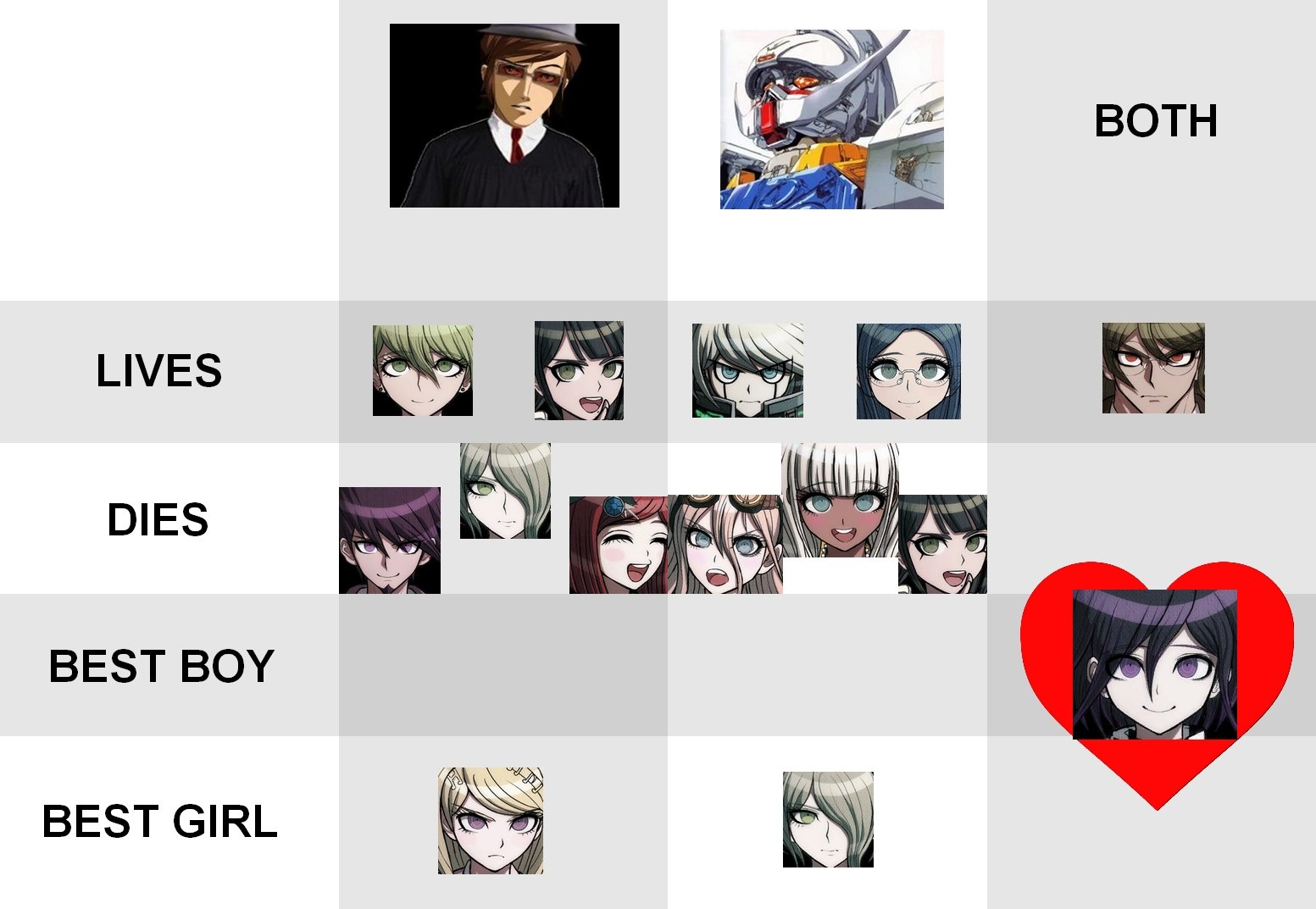 Bass: Haha, your survivors are just the characters you said were underutilized… It’s okay Mike, I’ll keep your crushes a secret.

Mike: One last thing. I felt the demo ended too abruptly. The lack of a conclusion to the trial, which we know won’t be in the main game, felt like a let down since it was doing very well at building up the tension.

Bass: Yeah, it’s a joke. It’s all joke. This demo, the struggle of these characters, this article, our existence. I think I need a drink.