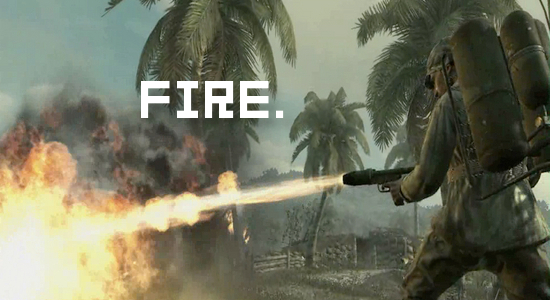 In one satisfying click, the wispy little flame on the end of a metallic barrel becomes a furious storm of heat and destruction. At first, it seems uncontrollable, such a marvelous display of power. Steadily, the focus of the flame narrows and becomes one with the carrier. His new doom shrouded arm is now a plague of death, as his scorn licks at his nearest enemies and frightens those still miles away. The canister on his back grows hotter as it empties its beautiful payload, but he doesn’t care. There’s probably an ammo pack around the place somewhere.

Ah, the flamethrower, the greatest achievement in videogame history. For Americans, the 4th of July is all about the celebration of our nation’s freedom. Our favorite way to promote such a noble ideal is through the use of explosions and fire. Perhaps you’ll be cooking hamburgers with fire, or even watching that tree in your yard devoured by it tonight as a wayward firework accidently works its way into the branches. Of any day of the year, today is the day that you will most likely be experiencing fire.

Ejecting fire via some sort of apparatus is my specialty in videogames. Nothing more beautiful can arise. From the bloom, to smoke, to enemy animations, the flamethrower is a staple of videogame weaponry. Hit the jump and join me on a small trip through videogame past, present, and future as I explore some of the best, brightest, and most satisfying fire ejectors around.

My first real introduction to fiery projectiles was Smash TV. After a bit of research, I found out that the gun that I always believed to be the catalyst of my desire to burn things in games was actually called a “spew weapon.” I’m not exactly sure what that is supposed to mean, but what I do know is that the weapon kills things with something resembling fire. For my standards, that’s good enough.

Smash TV is a lovely affair of guns, screen jumping, and a sickening portrayal of our consumerist lifestyles. Killing thugs armed with baseball bats for VCRs? Count me in. There are only a few weapons to pick from in Smash TV, none as nasty as the spew weapon when it comes to dismissing the hordes of enemies brought on the screen. After running over the fairly nondescript icon, a tank magically appears on the back, and a green barrel erupts from the sprite’s hands. As is the nature of Smash TV, I can only venture to guess that the tank is either filled with green kerosene chunks, really shitty liquid fire grenades, or extremely volatile wads of cash.

The gun provides awesome splash damage, but comes with a meager amount of shots. Regretfully, I am only allowed to use it for a matter of five seconds it seems. Perhaps that is because I cannot resist the temptation to eliminate everything on the screen instead of waiting for the hordes to build up.

Jumping many years of games, into what I would consider a more contemporary FPS, Return to Castle Wolfenstein: Tides of War features, by far, the greatest utilization of a flamethrower ever. Forget about its lackluster single-player mode. The multiplayer with its amazing balance is where the fun can be had with the weapon.

Why is it the greatest utilization, you ask? The best reason is because your enemy often spawns in very close quarters inside of buildings. RTCW’s flamethrower has a massive, yet satisfying arc complete with a vibrant animation. Getting into a spawn point, then waiting for the mass spawn to happen is nothing but gratifying as you observe the enemy bursting into flames. The blaze also inhibits vision, so even if enemies are in that few seconds of invincibility, they often cannot see well enough to fire back.

The nature of the objective based modes of the RTCW also makes the flamethrower an effective guard weapon as well. Have documents that need protecting? Just send three dudes with flamethrowers into the basement and watch as every unlucky victim strides through the door while burning to death. The effectiveness of this tactic is truly a sight to behold, nonetheless hysterical.

Also, it is impossible to run out of ammunition or kill yourself with the flames if a good Lieutenant or Medic is around. The system has a balance to it, which actually lends some credibility to the flamethrower-carrying soldier. Although, the next game I’ll mention has an even better class system and support structure to it.

Team Fortress 2 is a game that lends some credibility to the flamethrower.  The fire effects in Team Fortress are decent, but lack that flair for the dramatic. When I hit the gas, I really want to see some massive destruction. It does need to be noted that the burning trail left behind is great, as well as the on fire animations. There’s something about watching clothing erupt in flames while characters scream that just makes my day. The look of the gun is great, though, and by far one of the best videogame translations of a gun that shoots fire.

Much like RTCW’s flamethrower class, Team Fortress’ Pyro is a decent offensive class, with great defensive capabilities. He also comes equipped with two other weapons, one being a fireman axe. His handiest skill, other than watching objectives, has to be his ability to catch enemy spies. It is a simple process that requires a bunch of fire. Just simply shoot at anything that moves around, and if they start screaming and running away, then you know you have a spy in your base.

Valve apparently cares about the Pyro class as well. Considered a weaker class by Team Fortress 2 vets, the developer wanted to give the Pyro a bit more glam. Included in the update was yet another flamethrower that is more strictly focused on ambushing as opposed to outright violence. I see no sense in pussyfooting with fire though. Real videogame men just get out there and start lighting stuff up.

What does the future hold for the flamethrower? There is at least one game out there. Treyarch’s announcement trailer for Call of Duty: World at War proudly displays a flamethrower in several increments. Burning down an island in the Pacific has always been a small little dream of mine. I’ve emailed Treyarch at least seventy times thus far for exclusive access to a demo that just consists of the flamethrower and a jungle, but as of today, I’ve yet to receive a comment.

A man who loves flamethrowers can only hope, though.