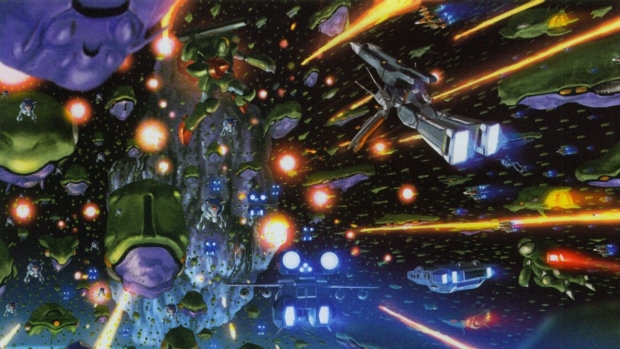 …it does. Just a little bit, though.

This is especially true since the folks interested in the idea – Vicious Cycle – are the very ones who made the previous Robotech titles (Battlecry, Invasion), as well as the Matt Hazard games, all of which are middling at best.

“They’re going to want to have [a sequel] because they’re hardcore fans, and we’d love to give it to them. It’s an opportunity that could sell and the first game was a wonderful experience for us. There was a lot of passion for the company and we had a lot of Robotech fanboys, which helped! We had a collector’s edition and it was a lot of fun making it. We had some great marketing for it and some positive reviews and eventually sold a half million copies.”

I’d like to believe that those “hardcore fans” were either Macross fans aching for a game (any game) or those who just didn’t know that Robotech (the best parts of it) are actually Macross. That’s probably not true, though.

To be perfectly honest, I can’t hold it against them. Macross never really “made it” as much as Robotech did, even when its viewers knew better (eventually). I’ve more or less resigned myself to the idea that we’ll never see as much of Macross on American shores as I will want.

If Vicious Cycle can deliver a Robotech game (presumably based on the Macross-ripped portions) that’s at least as good as the age-old SDF Macross PS2 or the Ace Frontier PSP titles (the latter of which are hobbled by their choice of platform), I’ll play it.

Hell, I’ll probably even enjoy it, as I really did like Robotech way back when. My sole requirement is that they can do a mission as or more epic than the one you can see footage of below.

In the meantime, watch the original on Hulu. Maybe – just maybe – the traffic will convince them to move some Macross Frontier our way.

After all, I had also resigned myself to never seeing a Sakura Wars game cross the pond. There’s still hope