Resident Evil 4, Silent Hill, & Saw all blended together into a gory cocktail

A return to true survival horror. That’s what Shinji Mikami, father of Resident Evil, and his new studio, Tango Gameworks, aims to do with The Evil Within. I saw the game in action at an E3 pre-show recently, and they’ve certainly nailed down the horror aspect.

The overall design structure of the The Evil Within reminded me a lot of Resident Evil 4’s. Mix in the nightmarish creatures that would be right at home in the Silent Hill series with the set pieces from the Saw franchise and you have yourself a nightmarish cocktail of pure terror.

The team at Tango demoed the beginning The Evil Within to us on a PC in line with current-gen tech. Visually the game was looking great, offering a lot of details while maintaining this element of horror-movie graininess. The third-person perspective camera bounces along with you rather than staying completely stationary, something that I typically dislike in games but it felt at home in this case.

You play as Detective Sebastian, and he and his partners rush to a mental hospital where some kind of mass murder has taken place. Other officers had already responded to the scene in force, but you quickly find that the entire place is deserted. You’ll find a grizzly scene upon entering the hospital — corpses litter the lobby with their blood splattered all over the walls and floors.

You as Sebastian will investigate the scene, which will lead you to the security room where a survivor is found. The survivor is shaken, blaming a patient for what’s happened. In the room is also several security monitors, with one of them showing several police officers running away from a ghost-like monster. These officers are killed with ease, and once done the ghost monster will look straight up at the camera you’re viewing him through, and before you can even blink the creature appears right behind you in the security room. 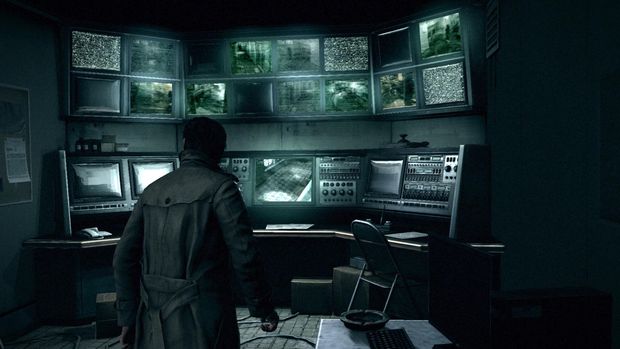 The screen turns black, and some time has passed. Sebastian regains consciousness, finding himself hung upside down by his legs like a piece of meat in a butcher shop. There are several other corpses hanging all around you in this room, and as you struggle to understand your surroundings you can hear a chopping sound followed by the pathetic, low screams of a man who knows it’s all over.

Chop. Chop. Chop. Chop. CHOP. And then you hear splatters. The splatters of blood and organs rushing out of a body chopped in half getting carried to a dumpster by a monster that’s twice the size of you. The monster then goes back to his chopping in the adjacent room.

From here the player needs to swing himself, using the momentum to get near the corpse in front of them that’s embedded with a conveniently placed knife. Once you’ve cut yourself free you’ll need to find a way out, only to discover the exit locked. There’s a set of keys hanging above where the creature is chopping up body parts, and when the opportunity presents itself you can grab stealthy grab the keys and get the hell out of there.

The door can now be opened, you’re free! Except you’ve tripped an alarm, and you now have to run for your life as the creature is chasing after you with his big chainsaw. Other than some classical music that was being played over an old radio in the previous room, there’s no score playing at all. The next fifteen minutes or so are filled with footsteps, panting, and the ever buzzing of a chainsaw. Just atmosphere, with nothing to distract you from the stress of escape. 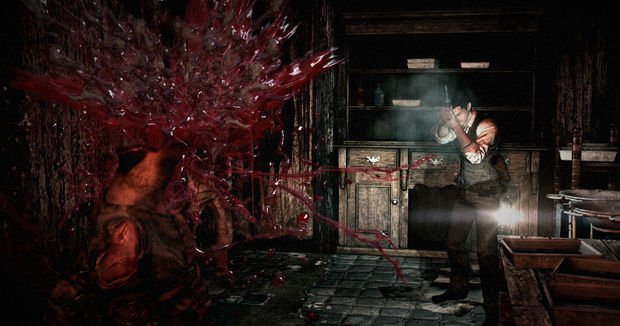 The next segment is a game of cat and mouse between you and the creature from here on out. You’ll get knicked in the leg by the chainsaw early on, causing you to limp along for the rest of this portion, but you’ve gained enough ground to stay ahead of the creature for now. He’s relentless though, and eventually you’ll be moving from room to room right along the creature in some brilliant gameplay design.

Perfect, except now the monster is ahead of you, and there are more objects blocking your way again. The creature seems to be on a set patrol path while in this next room, and appears to maintain that path until you advance forward. You have to get further through this room to get the monster to patrol other areas, that way it will break objects blocking the way, but this also means you’re always near the monster. One wrong move and it will all be over for you. 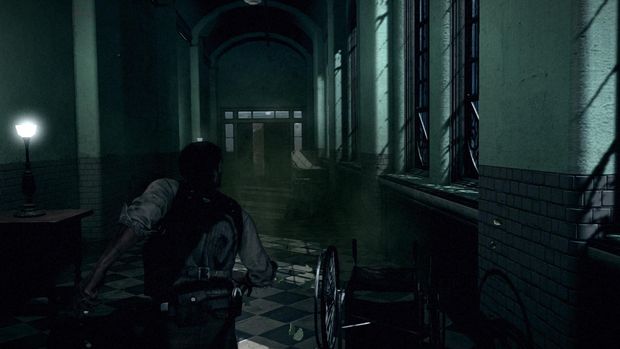 After a few of these type of rooms, you’ll finally come into a hallway with an elevator at the end of it. The monster has finally found you, however, and it’s a mad dash to the end of the hallway. You’re running as fast as you can on your messed up leg, vaulting over obstacles until finally safely in the elevator, surviving the ordeal. The elevator rises up, opening to the hospital lobby where this all started. Sebastian quickly heads to the exit, slams open the doors, and before your eyes is the world in complete disarray. The city before you looks like a disaster zone, like the world’s worst earthquake occurred. You’re stuck; there’s no escaping whatever you’ve entered.

From here we were shown later parts of the game detailing the survival horror combat, which was very reminiscent of Resident Evil 4. You’ll look around the environment for things you can pocket, like a syringe you can use for health. Weapon-wise the player was carrying a knife, and a couple of guns. Additionally I saw that you’ll be carrying torches, as it appears you need to burn the corpses of your enemies to permanently put them down.

The enemies themselves in this section were these human-like demons that could carry blunt objects and even torches. Fighting them appeared pretty straightforward — just hurt them enough to make them fall and then set them on fire. You can move and shoot at the same time, plus you can make use of other weapons like grenades, trip mines, etc.

Eventually dozens of monsters start coming at you in this part of the demo, almost to overwhelming proportions. At one point you will be transported to a completely different area. Before you were in a rundown shack, and now you’ve somehow ended up in a hallway in some industrial-like place. The player moves towards a set of double doors, and once nearby they burst open and a flood of blood comes pouring in like it’s The Shining all of a sudden. Before the blood hits you’re transported again, this time to a hospital room. There’s a puddle of blood on the floor, and from it emerges that lady with multiple arms, with the screen going black just before she slashes at your neck. 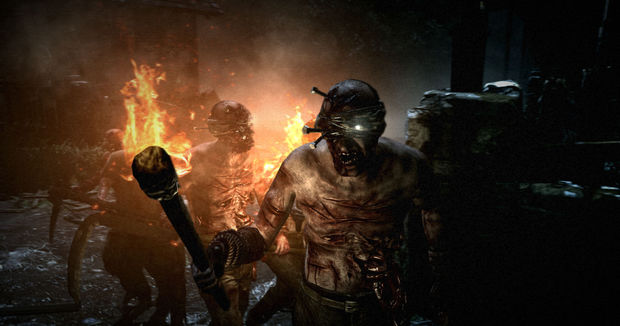 I was really into the demo, at least for the first half of it. The sense of helplessness as you flee the chainsaw monster was thrilling, and oh so very creepy. I enjoyed the later half of the demo too, but didn’t really feel the same tension, due to the fact that the player wasn’t as helpless as before. I wonder what kind of mix we can expect in the final product. I also wonder how linear the game will be. The demo was mostly straightforward, but a couple of the devs from Tango did tell me that we can expect exploration elements too.

Ultimately it’s hard to judge a survival horror game in short preview format. You need to play these type of games alone, in a dark room, with surround sound headphones to really see if it will make you never want to sleep ever again. It being the return to survival horror remains to be seen, but so far it looks like it’s on the right path.