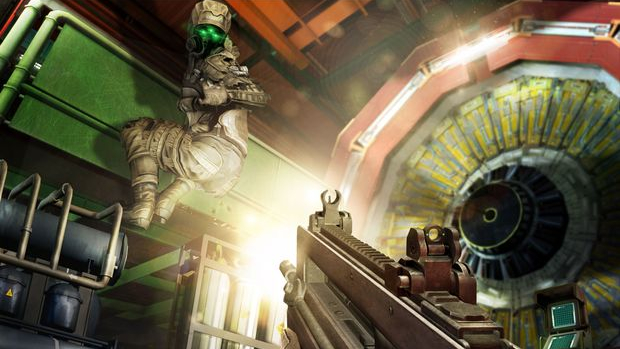 How about, instead, a war on terror cliches?

This latest Splinter Cell: Blacklist trailer reads like the Cliff’s Notes to all the previous Blacklist trailers, summarizing the game’s various aspects. There’s the silly, hyper-organized terrorist attacks on the United States that validate the government spying on citizens with an assortment of slapdash sci-fi tech. There’s the allowance of varying styles of gameplay — stealthy and one-man-massacre-y. There’s the co-op (except for you, Wii U. Not offline, anyway). There’s the multiplayer,

All of this is information is delivered in character from an NPC integral to the story as if he was reading the microfilm from a PR dossier. He also says, “if we have the right cash…then I can test out some sick mods on the gear,” so I’ll be the first to complain if we can’t at least stealth take down his noisy bum.

The pilot-able RC helicopter is sort of neat. It’s also being offered tangibly as an expensive pre-order bonus. Minus the tranquilizing weapons, naturally. Still, I’m content to acknowledge the Splinter Cell series is no longer for me. Except, maybe, for the returning Spies v.s. Mercs mode. The eight player iterations seem too manic, but the smaller, tenser engagements might still be my speed.

Are you excited for Blacklist, or do you find it lack-lister? Do you splin-terribly miss Michael Ironside’s knell? Anything about the game you de-spies? Have mercs-y on me.