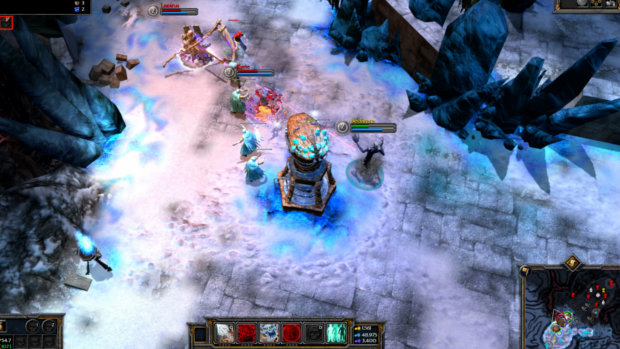 There are many good options out there for MOBA (multiplayer online battle arena) games these days. League of Legends is the frontrunner of the pack, Heroes of Newerth has a strong player base — it also just went free-to-play — and Valve is going to be offering us Dota 2 sometime soon, just to name a few.

One that you might not have heard of yet is Rise of Immortals, a free-to-play MOBA created by Petroglyph Games (Star Wars: Empire at War, Universe at War, and End of Nations).

Design-wise, this game is a perfectly standard MOBA game. It’s got a nice selection of heroes to pick from, and there has already been a new one added since launch. The combat and controls feel nice, and most of the abilities all work well together and are generally a lot of fun.

The visuals are probably the best to date for a MOBA. They ditched the cartoon look of most other genre titles, instead opting for a realistic art style. The animations themselves look nice nice and smooth, and it’s fun to watch your mages fight each other.

One unique difference from other MOBAs is that when you play a hero, you get persistent level points for that hero. So if I play a lot with Lazarus, the vampiric tank, I will gain levels over time. Each level will let you add points to a talent tree that will give you better statistics, improved cooldown times, and various other benefits. This also makes it easy to tell who has experience playing with a certain hero. The matchmaking is based on your hero level, so in a high-level match, you’ll know that everyone is solid with their character. It’s not completely groundbreaking, but it is very cool.

Rise of Immortals is well made — there’s no arguing that fact. What Petroglyph has done is solid; there are not many bugs, the game looks nice, and it plays well. Sadly, there is no one playing it.

I was in the beta for about a month, and I’ve tried playing it a few times since its launch. There is at least a ten-minute wait to get into a 5v5 match. 5v5 is also the only game type that people seem to be playing. There is 3v3 and 3vAI, but I haven’t really had a chance to check those out for the aforementioned reasons.

I can’t really go into too many details about the game, because I don’t have enough time to wait ten to thirty minutes to join a match repeatedly. From what I have played, though, I came away feeling that RoI was good. I don’t know enough about each of the heroes to tell you anything specific about balancing; that said, nothing jumped out as being way off.

It’s hard to fault a game because no one is playing, but that’s a huge part of an online game. You need some players to get more players. That can be an understandably hard thing for a developer to do, because they can’t force people to play. All they can do is create a game and hope that a community forms around it.

If you are looking for a new free game to check out, then go look at Rise of Immortals. I can’t guarantee that anyone else will be playing it, but it’s worth taking a look at if nothing else. Hopefully over the next few months, they can get a solid community built up. Only then can it become a contender in the ever-growing MOBA scene.