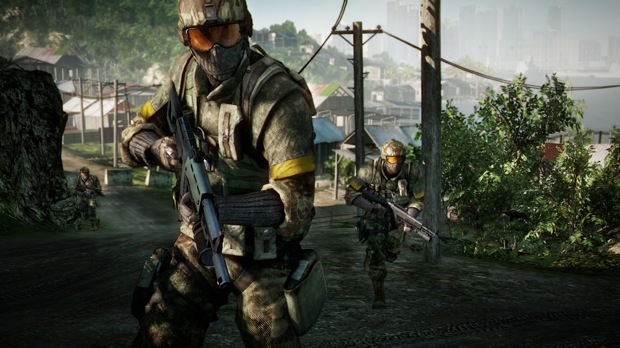 After getting a taste of the single-player in Battlefield: Bad Company 2, it was time to play the newly revealed multiplayer mode, Squad Rush. Squad Rush is basically a toned downed version of Rush mode designed to be a extreme competitive game mode for quick matches. Maps are smaller, there are no vehicles and rounds move along a lot faster.

Four teams of four will be switching between offense and defense sides as the offense team tries to take out the defensive side’s crate. There are two crates total in Squad Rush and once the first crate is destroyed, the map opens up a little more revealing the last crate that needs to be destroy.

One other multiplayer gametype was also revealed — Hardcore mode. This is a bare minimum experience. No HUD, no aiming reticule and weapons are more lethal. The game is as realistic as it can get in Hardcore mode.

If you’re looking forward to Squad Rush mode, then you better pre-order Battlefield: Bad Company 2 on the PlayStation 3 or Xbox 360 from GameStop as it will be an exclusive mode to those that pre-order. The mode will become available for all in April and until then, people can still play Squad Rush mode without pre-ordering so long as they’re invited into the game.