Spoilers: You don’t need to play the card game

[Kingdom Hearts is a confusing series that continuously stacks iterations of story, weaving prequels and interquels into an incomprehensible mess. Luckily, TheBlondeBass has a great primer to people looking to find a foothold. Great news for me considering I now own a PS4 with an upcoming HD remaster coming later this year. ~Strider]

Kingdom Hearts. A game series started on PS2, that managed to fit in eight titles and multiple collections across consoles and portables alike before Kingdom Hearts III even launches on PS4 and Xbox One. The multiple non-numbered entries since Kingdom Hearts II have been a source of confusion for many and a seemingly impenetrable wall for those who are curious to check out the series and see what the fuss is all about.

Well, this is about to change. For the few select people who take the time to read this article, at least. The Kingdom Hearts series can be divided into what I consider essential, important, and unimportant titles, and the collections easily allow you to play the most important games as long as you own either a PS3 or PS4. Ready to dive into the series that managed to make a fusion of Disney and Final Fantasy work? 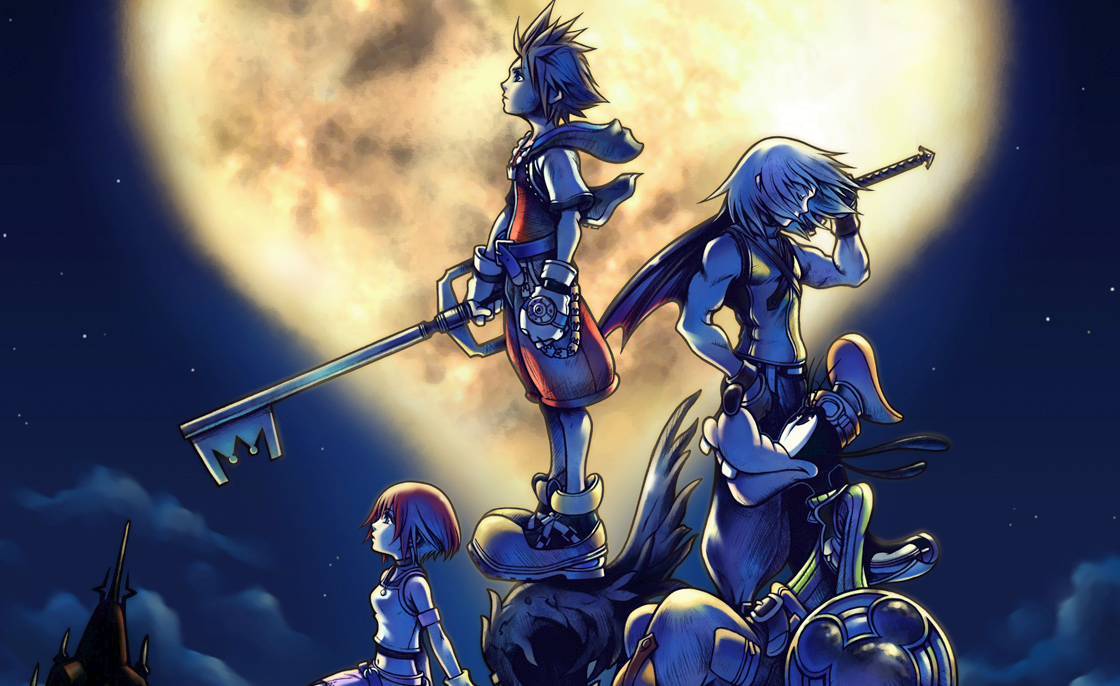 The game that started it all. Three kids, Sora, Kaiki, and Riku, live in totally-not-Japan, playing together on a mostly deserted island known as Destiny Island in their free time. They dream of seeing what lies beyond the boundaries of their tiny world and are building a raft to make this dream come true. After calamity strikes the island, however, they won’t able to journey together.

The original Kingdom Hearts definitely has the clumsiest mechanics of the lot. There’s a surprising amount of platforming considering the clunky jumping controls, in particular. But beyond that lack of polish, there’s a very charming game that takes you to iconic Disney world like Agrabah, Wonderland… and even Halloween Town! The story is also the simplest and most tailored for kids of the bunch, which gives it a nostalgic feel. Sora’s the chosen kid wielding a weapon of destiny, the Keyblade. He defends Disney worlds from beasts known as the Heartless and tries to reunite with his friends. Do you need anything more than that?

Still the highest-rated entry in the series, Kingdom Hearts II takes place roughly a year after the events of the original. Roxas, a young teenager, and his bunch of friends are enjoying the last week of their summer vacation. Unfortunately, stranger and stranger events start happening, which threaten to bring an end to their happy days together. Indeed, despite Sora’s heroic efforts in Kingdom Hearts Uno, the worlds aren’t completely at peace, with a new enemy faction, the Nobodies, appearing alongside the Heartless.

Kingdom Hearts II was an impressive refinement of the Kingdom Hearts formula. Jumping became smoother, combos flow together better, magic was more varied, and the addition of drive forms to switch the gameplay up made the game a blast to play. The world selection also included classics like Tron, Pirates of the Caribbean, Mulan, and others… All around a straight up improvement over the original.

Yep, a non-numbered entry is in the essential category! First shown in a secret ending in Kingdom Hearts II, Birth by Sleep is a prequel to the first two games. In a time where the art of wielding the Keyblade is mostly extinct, a few keep the torch burning. The story focuses on three of them: Ventus, Aqua, and Terra, which have parallels to the three friends of Kingdom Hearts I (Sora, Kairi and Riku respectively). After a test of mastery where only Aqua is deemed worthy of being called a Keyblade Master, a new threat appears across worlds: The Unversed. In a desperate attempt to prove his worth as a potential Master, Terra rushes to action, with the other two following after him. A new tale begins, one that sets up events that happened in the first two games, and one that doesn’t necessarily end well (as shown in the Kingdom Hearts II preview).

Birth by Sleep was originally designed for the PSP, and as such isn’t the most impressive visually. The game’s structure is pretty different from the first two games. First of all, the menu based system is replaced by a Command Deck. Instead of pressing down on the d-pad to reach magic, then selecting magic, all magic, techniques, and items are on a sort of carousel you can browse through with the d-pad. This means there is no MP, since everything on the Command Deck has its own cooldown. You play through the game with all three characters, with different sections of each world being locked off depending on who you play as. New worlds like Enchanted Dominion, Dwarf Woodlands, and Deep Space are introduced, with some key worlds reappearing from “earlier” entries. While I personally think Kingdom Hearts II is the strongest game in the series, this one isn’t far behind either.

How to play the essential games: 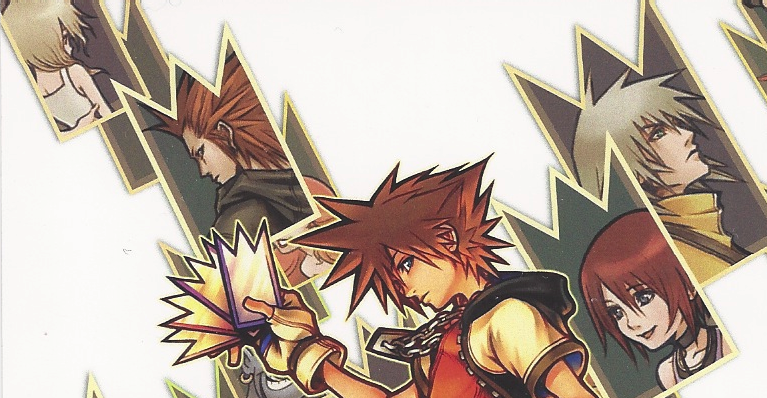 This game takes place in the year between Kingdom Hearts I and II. Sora finds himself in a mysterious castle known as Castle Oblivion while looking for his friends and King Mickey. He ends up climbing in the hopes of finding someone who is dear to him, but the castle is having a strong influence on his memories. As he climbs, he forgets more and more about his past and his adventures during the original game… what will be left of him when he reaches the top?

Chain of Memories is a very different game from the rest. Its Game Boy Advance incarnation was sort of a demake of Kingdom Hearts, being a sprite-based adventure that had him fight in worlds that were already part of Kingdom Hearts I, against bosses he had already fought before. Battles are fought using cards instead of a traditional menu: Even standard attacks are cards and can be beaten by stronger cards from enemies. You can stack multiple cards together to create a stronger move, but you end up losing one of your cards for the remainder of the battle as a result. As such, there was a clever form of resource management. Unfortunately, the card battle system doesn’t translate that well to the 3D gameplay of the PS2 remake, at least in my experience.

Still, it’s a creative gameplay concept either way and if you’re curious about the time skip between Kingdom Hearts I and II you’ll want to check this out. 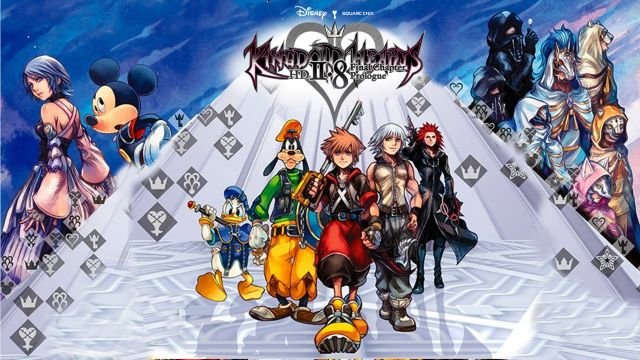 Alright, so this is a collection, but two of the elements contained within were made purely for the sake of the collection, so I might as well throw in the HD remaster with the rest.

Suggested playing order for the essential and important games:

How to play the essential and important games:

Since the remake of Chain of Memories is included in Kingdom Hearts 1.5 HD, the suggestions remain mostly the same:

You’ll want Kingdom Hearts 2.8, on PS4, to play the rest, however. But if you’re still curious about the remaining games in the series, well… 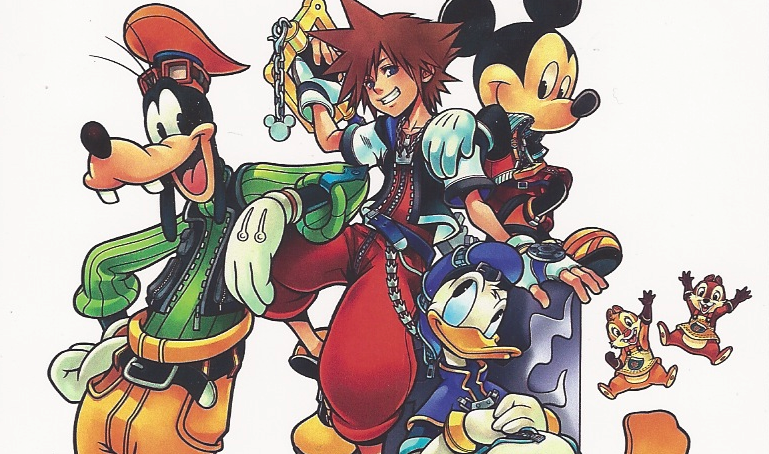 This game was originally developed for mobile phones, and it is particularly silly. After Kingdom Hearts II, Jiminy Cricket finds out that his journal, which documented Sora’s adventures, had two secret messages written by unknown people. The contents of the journal are thus scanned, and the game follows a digital Sora as he goes through a corrupted version of his previous adventures. Very silly. This game has been adapted into a movie for the Kingdom Hearts 2.5 HD collection. 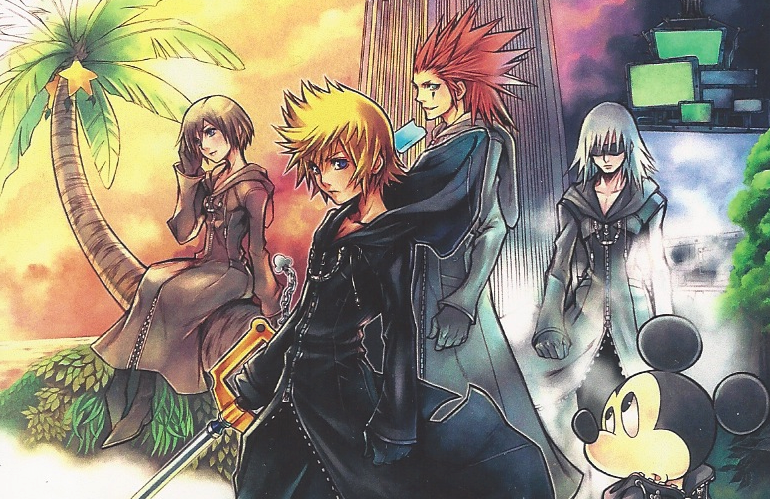 Developed by h.a.n.d for the Nintendo DS, this game follows the adventure of Roxas and another Keyblade wielder known as Xion in the year between Kingdom Hearts I and II. Leaving aside having to use DS controls with a 3D action-RPG, the main reason why this game is better left aside is how unimportant this story is in the whole scheme of things. There really isn’t much going on narratively, and most missions simply end with some ice cream eating on top of a building. Still, if you’re desperate for more Kingdom Hearts, this game has been adapted into a movie for the Kingdom Hearts 1.5 HD collection.

If you’re curious about the strange title, the game takes place during a period of 358 days over two characters.

How to play the entire series:

Both Coded and 358/2 Days have been adapted as movies for 1.5 HD and 2.5 HD, so my suggestions are the exact same as the previous category. If you want to *play* these two games, however, they are both playable on DS.

In any case, that’s as much Kingdom Hearts video games as you can get, so if you went through all that there’s nothing left to do but wait for Kingdom Hearts III! Whenever that comes out.