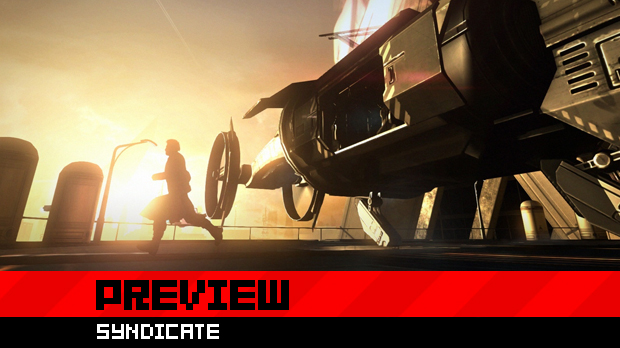 Syndicate is a name that evokes a passionate response from older PC gamers who can remember Bullfrog Productions in their prime. All it takes is one look at Maurice Tan’s recent analysis of details on the upcoming reboot of the franchise which leaked in order to see that.

It’s much loved, yes, but it was long ago and it was far away (oh, God, it seems so very far). The world has changed and bringing Syndicate into the 21st century, as with so many modernizations, is seeing its gameplay style shift from away from third-person, isometric real-time strategy to a first-person shooter.

Change can be a good thing. In the case of Syndicate, it’s clear that Starbreeze has the best of intentions and are making an admirable attempt to embrace the spirit of the series and marry that with a game somebody today might actually play.

Syndicate is set in a cyberpunk-inspired world where corporations have risen above the rule of law to infiltrate the populace in a truly terrifying way. By making available neural implants that allow the user access to the world’s digital infrastructure they remove all the worry from people’s lives. In exchange for this, the Syndicates gain valuable insight into how the minds of their consumers work, enabling them to exert more control over the populace. Locked in a battle for global dominance and using these tools, the corporations have escalated their business conflicts to all-out war.

Where the previous Syndicate titles took a very global approach, being strategy games at heart, this new game gives a much more personal touch to the world by putting you at eye-level with it. The demo I played involved an operation where I was to retrieve an implant from a scientist within a rival company’s facility, a very similar sort of asset acquisition one might have simply instructed an agent to perform in past titles with a few mouse clicks.

As I am a badass, cybernetically-enhanced killing machine, I am obviously equipped with a bullet-time ability which slows enemies and also shows enemy locations through walls. Natch. In addition, I have the ability to hack anything which has a connection to the global information network. This of course means all manner of door locks, turrets and so forth. But remember the bit about the populace getting those chips in their heads that connect them to the network?

Yup, the popular “persuadotron” element returns in the form of hacking enemy characters. You can choose from a few different ways to influence a person whose brain you’ve hacked. Suicide is one option but you can also use the “Persuade” command to make someone fight at your side temporarily and maybe take a few others down with him. Regardless of what you do when you’ve superseded someone’s free will, their screams of fear and torment are visceral and satisfying.

What’s in your head is plenty of fun, but let’s not count out what’s in the hands as my demo also included the return of the most memorable weapon in the Syndicate series, the Gauss Gun. This is a dramatically different machine than players will remember, with a lock-on system that guides bullets along an arc, allowing you to shoot over and around cover to hit a target. It’s quite entertaining to use, as you can target an enemy with a quick tap of the button and then spray rounds into the air and watch as they fly toward their mark.

Visually, Syndicate looks merely adequate at a passing glance. The characters and environments themselves aren’t anything to write home about but in combat scenarios, the blood really starts pumping, often into the air as a fine mist. It’s unapologetic about the violence as a clear, stylistic choice and that helps to make it pop despite the otherwise unexceptional visuals.

As a fan of the cyberpunk genre of fiction, I’m always happy to see another game take on the conventions. While my brief experience with Syndicate didn’t reveal too much in the way of plot, I have a lot of confidence in the abilities of Richard Morgan to pen a good sci-fi tale and the dialog from characters was delivered with aplomb.

Syndicate is not likely to blow minds, especially releasing as it is behind the similarly-themed Deus Ex: Human Revolution. It is worth paying attention to, however. It’s clear from my experience that Starbreeze has a deep respect for Syndicate and want to do right by the title while still providing a game experience which will please more than just the small minority of fans who would miss the antiquated play of the original games. And they may have pulled it off. We’ll know for sure when Syndicate releases in February.