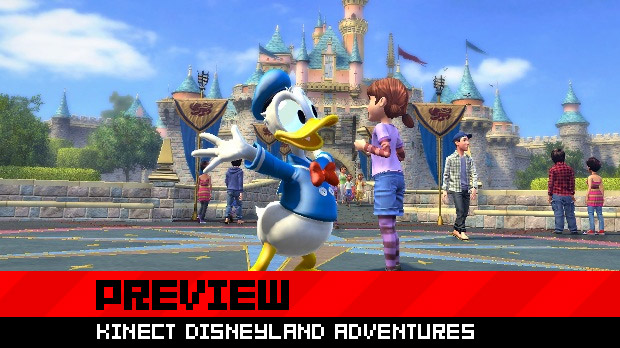 When Disneyland Adventures was announced at this year’s E3, I think I screamed in excitement. A Kinect game that lets me walk through a perfectly recreated version of Disneyland? YES PLEASE! Unfortunately, my actual experience with the game at the very same E3 left me a little disappointed. After playing, I walked away a little sad, as I am the biggest Disney fan on the planet and wanted more than anything for a brand new Disneyland game to be great!

But the potential was there.

Just this past weekend, at Disney’s D23 (a fan expo in the Anaheim Convention Center, right next to Disneyland!), I got to sit down stand up with an updated version of the game. In addition, I got to actually hop next-door and go into the real Disneyland with two members of the development team so they could show me just how much the game looks and feels like its real-life counterpart.

The experience inside Disneyland was obviously incredible. I got to ride Big Thunder Mountain, travel through the Haunted Mansion, and drink a root beer float from the Golden Horseshoe. But how was my journey through Disneyland Adventures? Did it possess the same magic? 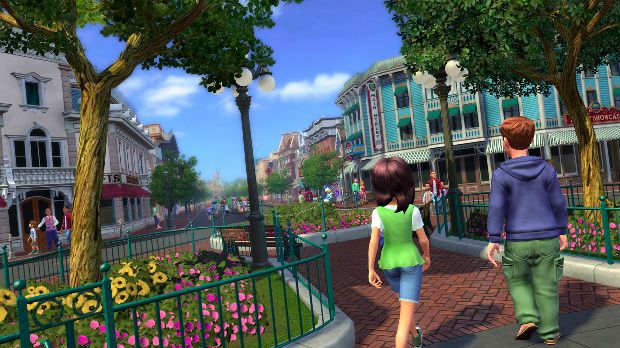 Shane White and Rob Davis, head producer and lead designer, respectively, of Disneyland Adventures, were the two gentlemen who not only guided me through the new demo of the game but also accompanied me into Disneyland after I was done playing!

And I will say this about both of them: They love Disneyland. A lot. Almost more than me! Which I didn’t even think was possible!

Their love of the park is absolutely infectious. Shane, especially, knows everything there is to know about Disneyland. He knows the history. He knows the layout. He knows all about every single ride and attraction. The guy is a veritable encyclopedia of Disneyland knowledge.

Did you know that the difference between a carousel and a merry-go-round is the direction they spin? He does! Did you know that one of the construction crew members hurt his foot while working on Big Thunder Mountain, resulting in a rock in the shape of a foot that is hidden somewhere on the ride? HE KNOWS ALL OF THIS (and a whole lot more)!

This love of Disneyland is important, because it truly shows in Disneyland Adventures.

In the new build I played, everything felt so much more complete and polished — much more so than it did at E3. But most importantly, you can tell a team of people who love and respect Disney were the ones that made this game. 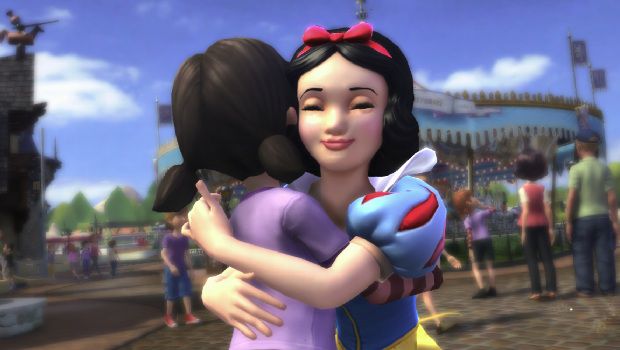 As the demo started, my character appeared in front of Sleeping Beauty Castle. (The game forces you to take the role of a child, since that is how Disneyland makes us all feel! Awwwww!) Immediately, I was able to navigate. To move around, I just pointed in the direction I wanted to go and my character followed. (This motion was selected since little kids love to point where they want to go when in Disneyland.)

Walking around was easy, and only a couple of times did I hit a few technical snags. But those snags had more to do with my inadequacies than anything — I kept getting excited when I entered a new section of the park and would wildly throw my arms around.

And when I say excited, it is with good reason. The park in Disneyland Adventures is exactly like Disneyland. I mean, it is so impressive that I really couldn’t believe what I was seeing. 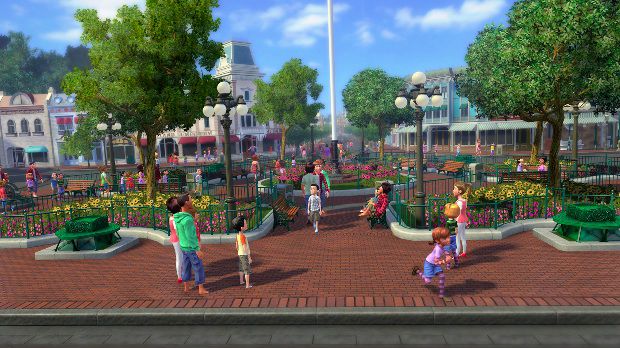 Every little detail is recreated in the game.

The golden spike under Sleeping Beauty Castle? It’s there. The Mickey-shaped flowerbed when you first walk in? Looks exactly the same! Even the shops and restaurants are featured in Disneyland Adventures!

And the scale of the park is eerily similar as well! Every path feels the right length; every ride is in the right position. The skyline itself is even meticulously recreated to make it feel like you are in Disneyland at all times.

This alone was enough to impress me when I played the demo.

But what really surprised me is how much stuff is going to be in the final version of the game. 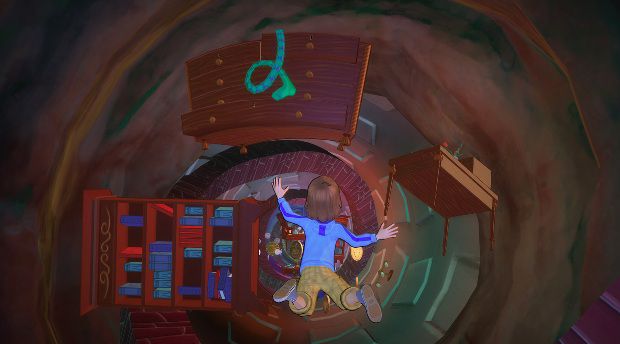 For those of you who don’t know the concept, Disneyland Adventures allows the player to walk around Disneyland and enter numerous attractions to participate in adventures that offer a wide variety of different gameplay, all controlled with the Kinect.

What Rob Davis pointed out to me (and he really wanted to emphasize this), was that the games you play in each attraction are not “mini-games.” They are adventures! Mini-games are associated with being basic and disconnected, whereas the “adventures” in Disneyland Adventures directly tie into the game.

For example, when you walk into Pirates of the Caribbean, there are cutscenes that tie each attraction into a larger story (with voice acting starring the actual, authentic character actors!). While the different activities feel like mini-games on paper, they really are so much more when seen in action. 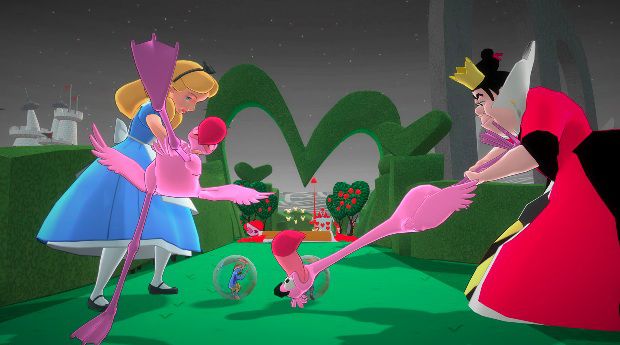 And boy, there is a lot of action in this game. When I wasn’t walking around Disneyland hugging, high-fiving, and getting autographs from famous Disney characters (yup, you can do all that), I was participating in attractions that had me jumping, ducking, and swinging my arms wildly around the room.

But you know what? It was a lot of fun! In the Matterhorn Bobsleds ride, one of the adventures finds you skiing down the side of a mountain, outrunning a massive avalanche. By swinging your arms as if you had ski poles, you can guide your character down the steep path.

As I was skiing down the treacherous slopes, I couldn’t stop laughing and cheering with every new crazy maneuver I was asked to perform.

The same can be said for all the other attractions I took part in. Each one was completely different and put a big smile on my face. 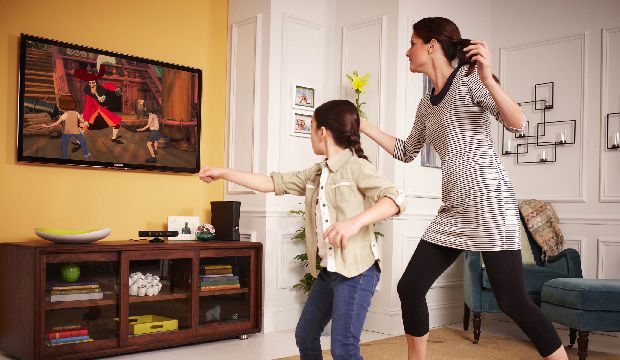 In the demo, there were six attractions available (Matterhorn, Pirates of the Caribbean, Big Thunder Mountain, Jungle Cruise, Alice in Wonderland, and Peter Pan), but eventually, there will be more than a dozen. (And if I had to make a bet, I would say even more!) Chances are that your favorite ride or attraction at Disneyland will be brought to life in the game.

If all of this wasn’t enough, there is surprisingly so much more!

I won’t go into everything — discovering the game’s secrets is just as fun as experiencing a new section of Disneyland for the first time — but just know that Disneyland Adventures is a massive game.

Not only does each attraction contain two to four completely different adventures, there are Hidden Mickeys to collect on each level, coins to earn to use at the various stores around the park, multiple quests that each Disney character will send you on, and a ton of other things to collect and participate in!

Rob Davis promised Disneyland Adventures would not be over in a couple hours. There are 20+ hours of gameplay waiting to be discovered once you start playing. I was shocked by that fact. 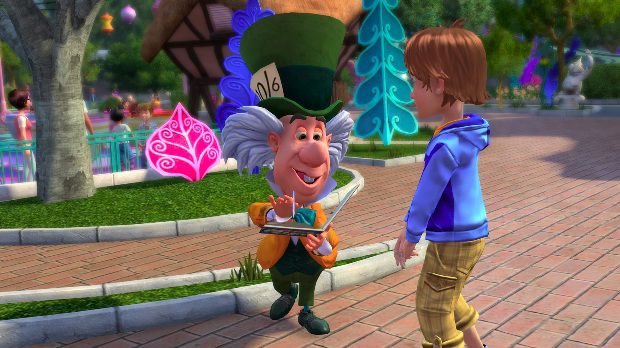 As it is, Disneyland Adventures is shaping up to be quite the ambitious and entertaining title. Sure, the game is pushing for more of a family audience, but that doesn’t mean people without children can’t have fun with it. I know I did!

After taking a tour of the real-life park with Shane White and Rob Davis, I can tell you right now that not only is the game amazingly accurate, it also has definitely been created by a team of hardcore Disney fans who absolutely love what they do.

And that love shows in every magical detail.

Kinect Disneyland Adventures will be released for Kinect on the Xbox 360 on November 15th, 2011.