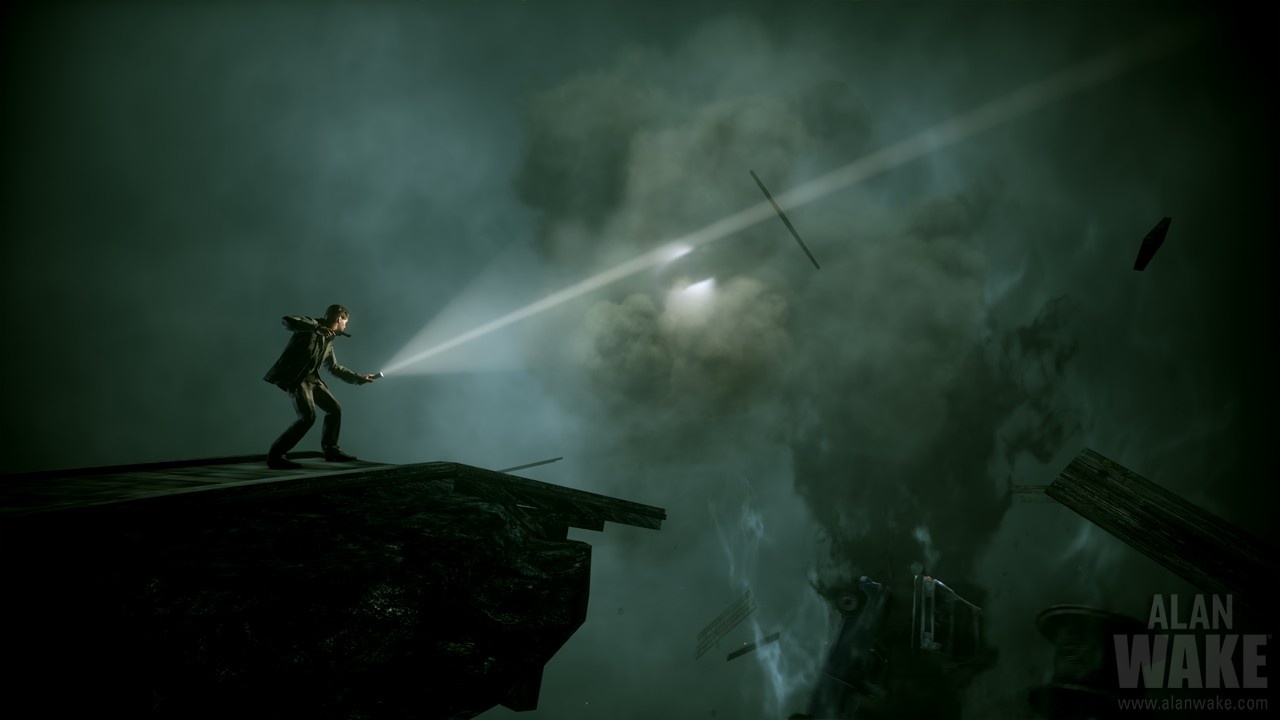 Seated in a Krakow convention center last week to watch Remedy Entertainment’s creative director Sam Lake give a presentation on unifying themes, the audience was treated to something it certainly didn’t expect: A partial striptease. Lake got down to his undershirt to cosplay as Max Payne while talking about that game; he did the same thing while discussing Alan Wake.

There’s a reason Lake does this, more than for sheer entertainment value (although that definitely plays a role too). He’s about to dissect each of Remedy’s past titles, minus Death Rally, in a way that explains how they all have character-centric stories; how all these video games take another medium’s structure; and how they all blur the in-game realities. These wardrobe changes are a meta play on that last one. Lake’s blurring the lines of his presentation by dressing up as the characters he’s discussing.

It’s a fascinating talk, one that we’ll probably post when the Digital Dragons organizers upload it to YouTube. It’s particularly interesting because it points out all the ways that Remedy’s games have the exact same pillars every single time. Lake starts with the big one: “We want to create iconic characters. Our bar has always been in as high-quality characters and stories as we can make. Because we make action games, the motifs and conflicts of these characters are the springboard for action. Heightened, exaggerated and we always bring a layer of genre elements as we allow to explore different genres — pulp fiction or supernatural elements or science fiction,” he says.

One way that Remedy excels at keeping the focus on the character is by creating worlds that are seen through the eyes of the protagonist. “It comes down to the point of view of the character, and the point of narration is one tool we use for this,” Lake says. “It means that when you experience the game and the game world, you are not exactly experiencing the world itself, you are experiencing the version of the world that the character sees. It all goes through the point of view of the main character.” So the terrible snowstorm in New York City might be exaggerated because it’s a manifestation of Max Payne’s inner conflict brought out into the external world.

And, most often, these conflicts are recurring through Remedy’s works. Lake explains “Now, when it’s about character, then obviously the themes need to be very personal for the character. For me, it has always been about the question of what is the most personal up-close thing about the character. For me, it’s about family. And because it’s an action game, there needs to be conflict and drama, so it’s about a broken family. If you think about life from this perspective, everyone wants to be with their loved ones, but our hero is ultimately on this journey on his own.”

Max Payne is saddled with extreme guilt and sadness over the death of his wife. Alan Wake feels the same over a failing marriage. Quantum Break‘s Jack Joyce goes through the whole “If I could only go back and change things and undo mistakes” mindset while trying to save his brother, the only family he has left. At their cores, these games are all the same.

Apart from characters and their motivations, Lake also spent a good amount of time outlining how each video game draws from other entertainment. Max Payne is a comic book with a three-act movie structure. Alan Wake is a novel. Quantum Break leans into this completely and actually is half TV show. “To me, it’s been a logical journey in the sense that all these different mediums play a role in our kind of fragmented life. With that, it feels like a natural way to bring these into the fictional world that we create. I’ve always felt with games that you can make your own rules in a way and kind of try different things out,” Lake comments.

This presentation was very much focused on Remedy’s past, but time is a flat circle. The way Lake spoke about everything, it made you realize that this wasn’t an analysis of the studio’s works, but rather an identification of the studio’s earmarks. These are the things Remedy holds sacred, and then it finds creative wiggle room within that structure.

Lake ended the presentation by saying that he couldn’t talk about Remedy’s next game which is currently codenamed P7. No one expected him to. Digital Dragons isn’t the sort of place where that kind of reveal happens. But, in a way, he let us know the direction it’s probably headed. When P7 is formally announced, don’t be surprised if it’s a character-centric action game, with themes of guilt and broken family, that draws inspiration from other mediums, and that blurs the lines of its own reality. It doesn’t feel like such a leap when you realize that’s all Remedy has been doing since 2001.