News has been popping up all over the place about a new Alternate Reality Game surrounding Halo 3. I was really excited to hear this. I was a huge fan of the I Love Bees saga (I even made a pilgrimage to answer one of the pay phones) so it sucks to say that my time so far with this new ARG for Halo 3 called Iris has been disappointing.

Before I jump into this mystery, let me warn you, there’s a lot go through. So, take off your pants, bring out the lube, and prepare to pleasure yourself to my words.

[Editor’s Note: There are a lot of terms I’m going to use that only the hardcore Halo fans would really understand. There’s a good chance some of the stuff I mention will leave you scratching your head. Thank the Gods for Wikipedia.]

First, let me show you this “cryptic” e-mail Microsoft sent out: 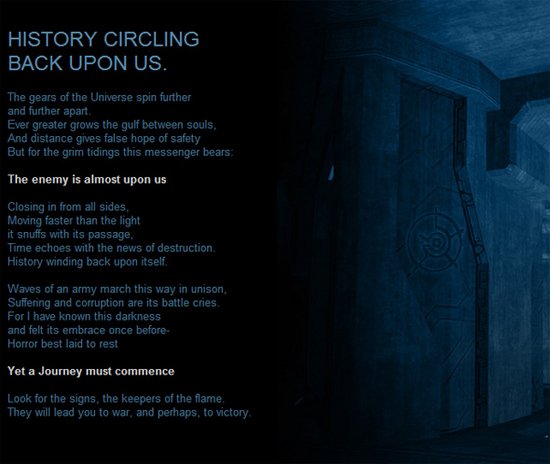 So what the hell does this message mean? I’m going to take an educated guess (I’VE READ THE BOOKS!) and say that this message is from one of the Monitors/Oracles (like 343 Guilty Spark). Although, if this is truly the case, it’s weird for an A.I. of this caliber to be talking in the way it is. At the same time though, it would make sense that this is a Monitor because they’re the only thing that could have survived after the rings were activated the first time.

Regardless of who is saying this message, it seems to referring to the Flood and what the Flood will do if they make it to Earth. Also, I think the band Journey will have some of their songs in the game. Actually, the part about Journey stands for the activation of the Halos. If the Halos are activated, the Flood die (well, starve to death) and the Flood will not succeed. Yet all sentient life will die. This is the goal of the Covenant. They want to activate the Halos and go on their misguided Great Journey.

Next on the ARG check list is the A.I. known as Adjutant Reflex on the Bungie and HBO forums. So far, nothing really important has happened with this part of the ARG. A lot of gibberish building up to something potential big. Durga was so much better and sexier. 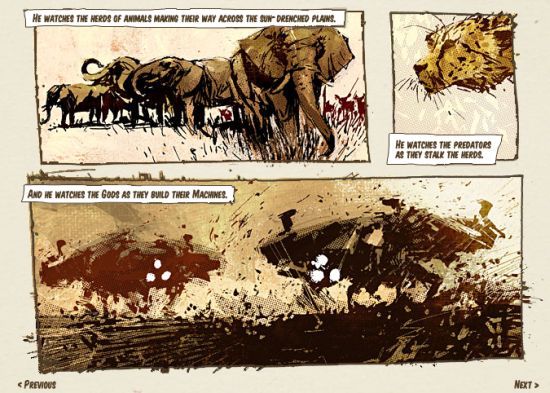 Next up is this Halo 3 comic. Set 100,000 years in the past, it takes place in Africa as a man watches on as the Forerunners build their construct seen in the first trailer at E3. On the very last panel, it’s possible to move the panels around, and if you do a little detective work, you’ll find some numbers correlating to a Web site. Going to said Web site, 206.16.223.65, you’ll be taken to a page with *GASP* a countdown. This countdown is not normal and is based on Bungie’s favorite number, seven. According to Internet Matlocks, the countdown will end on June 20th, midnight o’clock.

Another site has been found through the comic as well, called Society of the Ancients. The page was made by a group of people who believe that there are aliens such as the Forerunners and have evidence that they have been on Earth before. More details about the site can be read on Wikipedia. I personally don’t have the fortitude to look through the site. My eyes have natural defenses whenever I come across a site that looks like it was made by an 8-year-old finding out about Angelfire and free layouts for the first time.

[Thanks to TeamXbox for the info on the comic and countdown.] 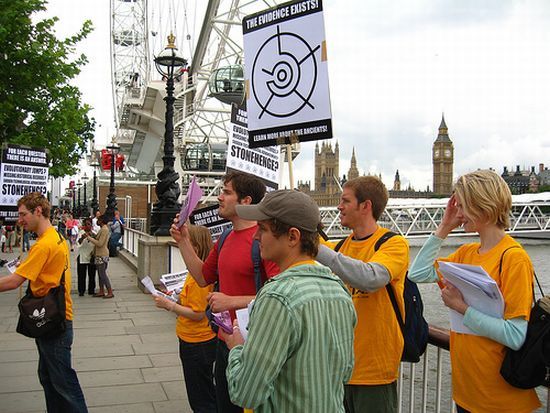 I may not want to talk about their Web site (actually, there’s really nothing to talk about … yet), but I can at least mention that the Society of the Ancients are spreading the word about this ARG. Groups of people wearing the S.O.T.A. name and holding signs resembling the glyph are rallying in San Fransisco, Vancouver, Chicago, London, New York and other places telling people of the Ancient aliens. Gamedrop has a few more images of the event and video of one of the S.O.T.A people talking about what their goal is.

The group has been handing out fliers and informing people of the mystery surrounding Stonehenge. The correlation of the timer ending the day of the Summer Solstice, and there being huge celebrations by Stonehenge during the Solstice is leading The Hushed Casket to believe whatever the big announcement is going to be will be announced at Stonehenge. 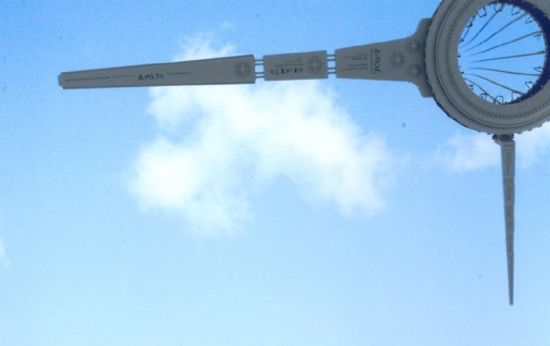 Finally, there’s this Web site. My spider senses are telling me that this website more than likely has nothing to do with the ARG (Hello Kitty?). Although, on further inspection of the source code, there’s this image. Which is a close up of this alien spaceship that resembles the glyph that has been seen on all of the sites relating to the ARG. The UFO site was just made last week, so there’s a good chance this has something to do with the ARG. Exactly what though? Maybe the Forerunners looked like Hello Kitties.

[Thanks to iRaf for this tip and IGN for the info on this bit.]

All in all, the problem I’m really having with this ARG is that it’s all over the place. Too much going on, and all seeming to have no relation to the other. With I Love Bees, you just needed the one Web site and hope that people that lived near pay phones would answer and say the right stuff to unlock sound clips. This so far just seems like what would happen if all the animals on Noah’s Ark were blinded and tried to have interspecies sex.

[Big thanks to Buck F1tches for the 300 links you’ve sent in on this topic alone.]