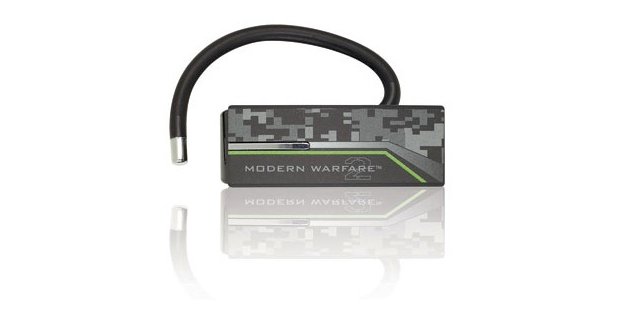 Mad Catz’ Call of Duty: Modern Warfare 2-themed PS3 communicator doesn’t harness the power of the throat like its Xbox 360 counterpart does. This one is just a light, wireless Bluetooth device with a cool coat of paint. No frills or oddities; just boring ol’ microphone here.

If you’re an asshole who talks on the cell-phone while driving (note: hands-free doesn’t make me feel different about you), you’ve no doubt used a communicator like this before. Its setup with the PS3 isn’t much different than what you would do with most phones, either — you have the PS3 (or phone) find the device, you enter in a code to activate the signal or whatever, and you’re in business.

So there’s nothing remarkable about the PS3 wireless communicator, which is fine by me — I don’t mind traditional and usable design. One problem though: I can’t seem to get it to operate at a level I’m comfortable with.

Part of the setup process is tinkering with settings inside the XMB in order to lower the chance or occurrence of interference. I could never find that sensible level. At all times during my testing, the audio component of the lightweight headset blasted hissing sounds into my ear, as if a ticked off cobra was coiled inside the device.

To make matters worse, I’ve yet to find a setting that made my voice clear, crisp and at a level to where people didn’t have to strain to hear me. One of my first tests was with Sports Sarkar in a PS3 chatroom. He said the volume of my voice was rather low whenever I spoke at a normal level. When I strained my mighty vocal cords with near-yell levels he seemed to hear me much more clearly and louder.

In live fire situations (note: a game) people don’t seem to respond well to my voice, often telling me that I’m hard to hear or not responding at all. I don’t have this problem with my SCEA official headset, so I’m going to go ahead and pin the blame partly on the microphone.

I’ll admit that my office has a ton of wireless signals pulsing through the air — my router tosses stuff out, as well as my computers, my controllers, and a few other small gadgets. I’m surprised I don’t have brain cancer already, but that’s beside the point. Basically, I’m trying to say that the poor performance of the Mad Catz PS3 Wireless Commnicator could be pinned on the conditions in my office with the multitude of signals. I’m no science man, so I don’t know if these things can even interact with each other, but I suppose its possible. Then again, I still don’t have these problems with my SCEA microphone. I just tried it out to make sure.

Like with the Throat Communicator, it’s not hard for me to tell you to be weary of this device. Definitely keep the receipt handy if you’re willing to try this babe out.

The Call of Duty: Modern Warfare 2 Throat Communicator is available at the Mad Catz online store (as well as other places) for $39.99.