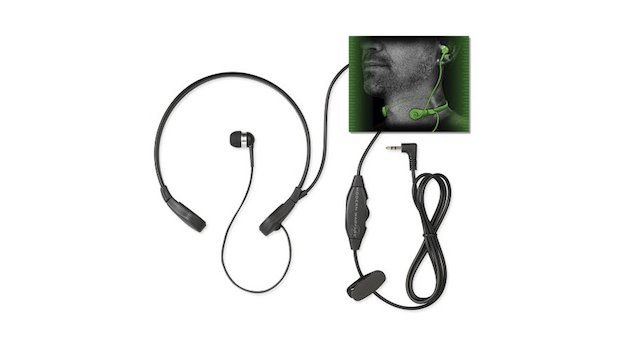 I’ve yet to test a third-party console communicator that I’ve liked. The audio and voice quality never measures up to the two products Microsofts makes available for its platform at a premium price. Mad Catz’ Modern Warfare 2-branded Throat Communicator is no exception to this. While cute on the design-side, it doesn’t offer comparable quality.

And I’m guessing it isn’t up to snuff because it picks up voice from your throat. Most communication devices have a microphone that extends from an audio earpiece. As the name of this communicator implies, this isn’t the case with the Throat Communicator. Its microphone sits in the middle of a rounded end of a rigid plastic ring, providing what I suppose is the best throat-to-microphone muffled action.

During my testing, fellow staff member Jordan Devore couldn’t understand half of what I said to him via the device. Out in the wild, people didn’t seem to catch what I was saying either. After sending several messages to an extra LIVE account that I possess, I discovered that the voice projected by the device was garbled and much lower in pitch than normal. Still curious, I moved the ring around on my neck several times — it sits loose and there are zero options in terms of tightening it — and still experienced the same bad results.

The audio component, on the other hand, worked just fine. Jordan sounded like Jordan always does when I’m using a Microsoft-certified microphone.

Like the design with the microphone, the audio is a bit different as well: Mad Catz opted to offer just a single audio output, a tiny-corded dongle that fits super snug into the ear hole. It cuts the noise from the game in that one ear because of the fit, altering your directional sound perspective, but it does perform its job well.

Speaking of cords, the communication device plugs into the bottom of the controller just like any other wired device. It also has a switch that can turn the microphone off and on, as well as mute it. I had a hard time moving my switch into the mute groove, which bothered me, but there is something even more suspect with my particular unit: the “off” position and “on” positions are reversed. If you move the toggle to off, the microphone responds and vice versa.

The packaging insists that this device was designed to cut out external noise from communication. It does this, but so do other certified devices in my experience.

The Throat Communicator works, but its quality is nowhere near as good as the wired and wireless Microsoft-certified Xbox LIVE communicators. If you’re in a pinch and you really want to talk to people through your neck, go ahead and grab this thing, otherwise its best to stick with what you probably already have (as boring as that sounds).

The Call of Duty: Modern Warfare 2 Throat Communicator is available at the Mad Catz online store (as well as other places) for $29.99.