Has there been a more iconic and recognizable videogame franchise than the Super Mario series? I can’t think of a single other property that has been so instantly recognizable that even its regular, cannon fodder enemies have become superstars in their own right. From the Goombas to the Koopa Troopas and the fantastic Shy Guys, you can look at any single Super Mario character know exactly where it came from.

Mario’s many enemies are varied and nearly always designed superbly. However, there is one particular foe that has been thwarting the plumber’s plans since 1988, and he often doesn’t get quite the recognition he deserves. At the very least, he’s not gotten a partially ironic tribute on the Destructoid frontpage.

I am, of course, talking about Dry Bones. Dry Bones is easily up there among my favorite videogame characters ever and I have been unable to stop thinking about him. Perhaps you’re wondering (quite rightly) why I have felt the need to dedicate an entire article to this skeletal turtle. Well, why not read on and find out? 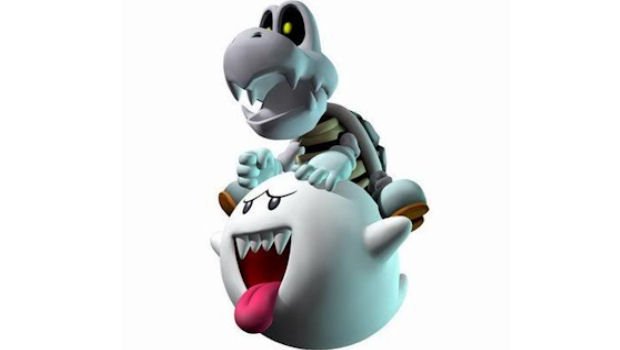 Dry Bones first appeared in Super Mario Bros. 3, released in Japan in 1988. His MO has remained almost entirely unchanged since his first appearance, and why should it? Clearly one of themost effective Troopas in Bowser’s army, the Dry Bones has been an effective hindrance to Mario for the past twenty years, terrifying players as a near-invincible undead warrior, capable of falling apart and reconstructing itself whenever Mario bounces on its head.

While the concept of Dry Bones is something we’ve all grown used to, nobody can get used to the sheer level of horror and intensity that one experiences when encountering these walking corpses. When we first met Dry Bones all those years ago, we simply did not know what we were in for. Do you remember that first time you ever stomped down a Dry Bones? The utter jubilation of victory. Another dead Koopa Troopa, down in the dirt where it belongs … but wait … what the … what the hell!? Oh my God, it’s moving … those bones … those bones are coming back together … Oh Jesus, oh Jesus this is real … will somebody stop these bones!? Will somebody stop these Dry Bones!?

You have to admit, Dry Bones is pretty damn scary. 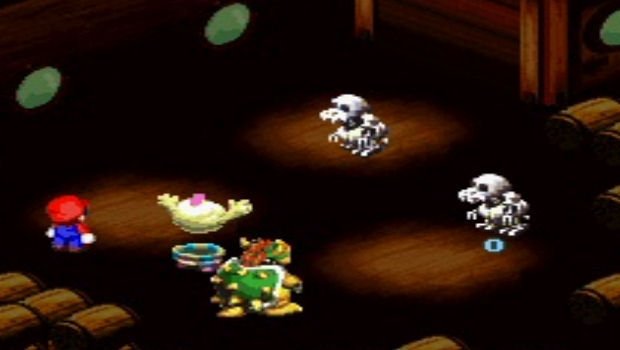 Since his Super Mario Bros. 3 appearance, Dry Bones has become a frequent enemy, evolving from a simple Koopa Troopa recolor to a character in his own right. He next appeared in Super Mario World where he resembled a cross between a dodo and Barbara Streisand. Not a good look for the character, and clearly the low point of Dry Bones’ career. I’m sure appearing in Hotel Mario didn’t help his self-esteem, either. Still, he would later go on to appear in Super Mario RPG as an enemy that could only be defeated with special attacks, and has become a permanent fixture in the Paper Mario series. He has three little hairs in the Paper Mario games, which makes him adorable.

Dry Bones’ appearances in the Adventures of Super Mario Bros. 3 cartoon, however, were not so adorable. In fact, the thing was downright terrifying. Represented more as a realistic skeleton turtle than a comical creature, this grotesque thrall was mostly a silent and gruesome parody of death. However, when it did speak, it would do so in the hushed whisper of multiple voices, a sound that you did not so much hear as simply felt between your flesh. The way they would walk, crawling on the floor like scuttling cockroaches, was absolutely horrific as well. Truly, the Dry Bones of the Mario cartoons was an HR Geiger nightmare reflected through a cracked mirror and embedded in the mind of a serial killer. That’s how messed up they were. 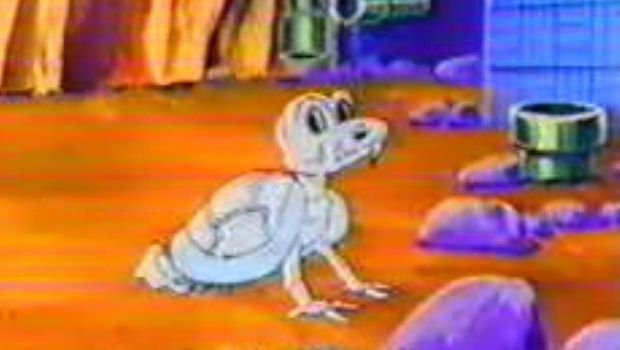 Fortunately, the modern day Dry Bones is a satisfying juxtaposition of the spooky and the fun. His modern appearances in New Super Mario Bros. and Super Mario Galaxy portray him as an upright Koopa with white gloves and boots. He is still an inspiration of dread thanks to his undeath, but it’s cute enough to want as a pet, which I think everybody does. New Super Mario Bros. also gave rise to the Super Dry Bones, which was really big, and that made it even scarier.

Every encounter with Dry Bones is a joy for me. It might be hard for some of you to understand, but I actively enjoy the sight of them. I’ve been playing Mario games recently for the sheer purpose of encountering a Dry Bones. That’s winning the game as far as I am concerned. Dry Bones encounter = ultimate victory. Of course, meeting and beating a Dry Bones is one thing … playing as one is sheer ecstasy! 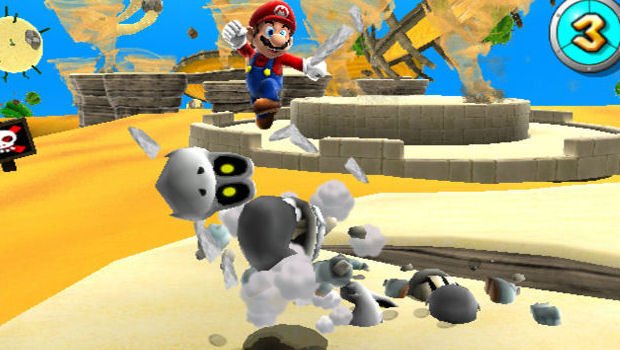 Dry Bones’ playable appearances are rare but always welcome. He first appeared in Mario Superstar Baseball, where he was great at pitching and fielding, but lacked in the running and hitting area. In Mario Super Sluggers, Dry Bones returned with a superior hitting ability, most likely because everybody knows he is fantastic and needed to be more powerful. As if Dry Bones couldn’t get more intense, he also uses a giant oversized bone as a baseball bat. I mean, that’s the mark of somebody who truly owns their reputation, to go that far.

The skeletal turtle also appears in Mario Strikers Charged, where he works as a quick defensive sidekick. In yet more evidence of living his gimmick, Dry Bones goes into battle with an absolutely badass uniform. Many other characters sport football helmets, but since Dry Bones has an impervious skull, he doesn’t require such protection. Instead, he simply paints the top half of his head in his team’s color, making his own cranium a living helmet. Now if that’s not absolutely brilliant, I don’t know what is. His theme tune was baller, too. 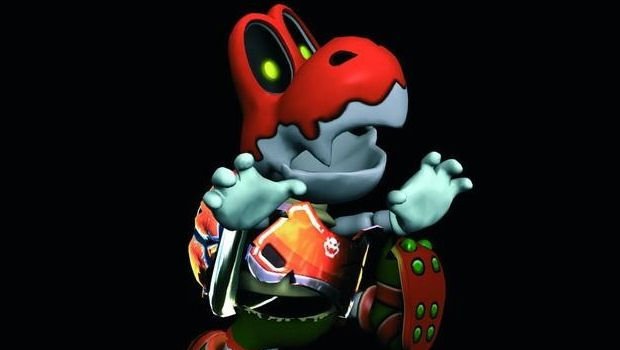 Dry Bones is playable in the later Mario Party games as well, but he really hit his stride with Mario Kart. Clearly included due to immense fan pressure, probably, Dry Bones kicks arse on Mario Kart DS and Mario Kart Wii. A lightweight racer with a low top speed but a high acceleration and off-road ability, Dry Bones can get fast quick and cut corners. He’s been my go-to guy in Mario Kart ever since he was introduced on the DS, and I really am considering a letter-writing campaign to have him patched into the console versions of Mario Kart SNES and Mario Kart 64. I think if enough of us keep the heat up, Nintendo will have to re-release the SNES version as Mario Kart: Dry Bones Edition, thus giving rise to the ultimate version of the classic racing game.

Still not convinced that everything related to Dry Bones is great? Need I even mention Dry Bowser? 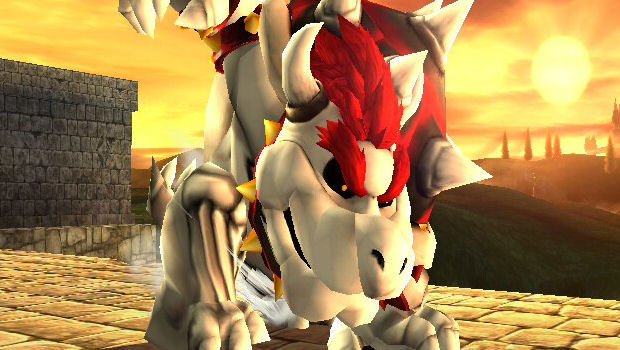 Even the King of Koopas knows that the Dry Bones look is the style of champions.

Also, Dry Bones is a skeleton, and skeletons are always brilliant. If you can name me one skeleton that isn’t cool, I’ll chew through a pregnant woman’s stomach with my own mouth. It simply cannot be done. Whether they’re the skeletons in Castlevania or the terrifying stop-motion ones in Jason & the Argonauts, it is a universal law that if it’s made out of supernaturally animated bones, it is awesome. I love skeletons of any description, and this reason alone makes Dry Bones my favorite Super Mario character.

It doesn’t hurt that he’s a turtle, and most turtle-related things are terrific as well. Ninja Turtles, Turtle Rock Studio, and the Roman Army shield formation known as the turtle are all fine examples of excellent turtle-themed things. The turtle aspect obviously applies to all Koopas, but Dry Bones wins out thanks to the aforementioned skeleton thing. 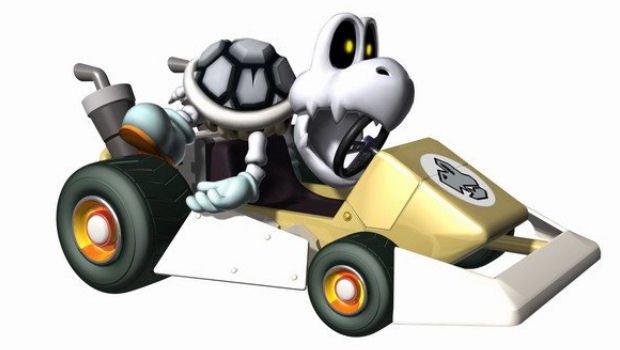 Dry Bones is the greatest Mario enemy of all time, and one of the best videogame characters in creation. He’s terrifying, he’s adorable, he’s invincible, and he’s a skeleton. What more could you need? I hope that next time you encounter a Dry Bones on your travels through the Mushroom Kingdom, you give it the respect it deserves and remember just how awesome it is. Also, don’t use an invincibility star and kill it. That’s just not cool!

[Also, most of these images come courtesy of the Mario Wiki]