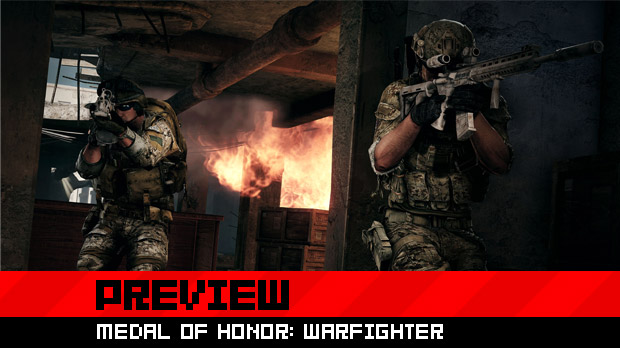 It hasn’t been that long since we first got a look at Medal of Honor: Warfighter‘s single-player campaign. For general details, do be sure to check out that preview. Recently though, we got a chance to spend a few hours with the game including new single-player content. Specifically, two whole campaign missions.

The first mission we played, entitled “Shore Leave,” was actually the Somalia demo that many of you are probably familiar with. It starts off with your squad storming a beach while under sniper fire. Shortly after you make it to land and into the buildings, you initiate a breach sequence, not unlike what Call of Duty has been doing since Modern Warfare 2. Warfighter takes a slightly different approach in that you can chose how to breach a room, which almost becomes its own meta-game. Do you want to simply kick the door down and throw a flash bang, or shoot the lock off with a shotgun?

For all the options you have, only a few are initially available to you, with more being unlocked by performing a certain number of headshots during breach moments. It’s a self-contained mechanic, so you cannot earn new options by performing headshots in standard firefights.

That all being said, I can’t help but fear this was a bit of a wasted opportunity. While it’s cool that breaching equates to more than walking up to a door and holding a button, all the different options are still functionally similar. It doesn’t matter if you choose to kick that door in or shotgun it; the end result is still a slow-mo shootout on a couple of stunned enemies.

If Danger Close was going to go through the trouble of creating a whole system behind breaching, why not go further than making it a choice between animations?

The level came to a close with a sniping sequence, which actually showed how well the gunplay has been tuned. Anyone who remembers the sniping sections of the 2010 Medal of Honor will remember how impossibly accurate aiming was. With bullets that traveled in perfectly straight lines, there was no consideration of sway, bullet drop, and other factors. That is definitely not the case here, as the sniping is much more grounded in reality. It may have taken a minute or two to get past the learning curve, but aiming a reticule well above a target that’s 100+ meters away to account for bullet drop definitely felt much better.

Our time with single-player wrapped up with a second mission, the not-so-subtly titled “Hot Pursuit.” The entire mission is car chase sequence. Needless to say, this is a pretty big deviation from the core gameplay (shooting things in the face), but what you may find surprising is that it was actually a lot of fun. After running the modern FPS gamut of set-piece moments, sniping, breaching, and the like, racing through the streets of Karachi was a nice change of pace.

Created in collaboration with Black Box Studios, the driving handles well — it was both responsive and incredibly simple to pick up and play. This is, after all, still a shooter, so it wouldn’t make the greatest sense to include all the handling intricacies of a Need for Speed title. Provided that these huge breaks from the core gameplay are kept relatively sparse, I’m excited to see what other tricks Warfighter has up its sleeve.

Despite a few fears of missteps with regards to the breaching system, I’m altogether hopeful for Warfighter’s campaign. With only a few short weeks until release, there’s still multiplayer to cover, so check back Oct. 11th for our full impressions on that.