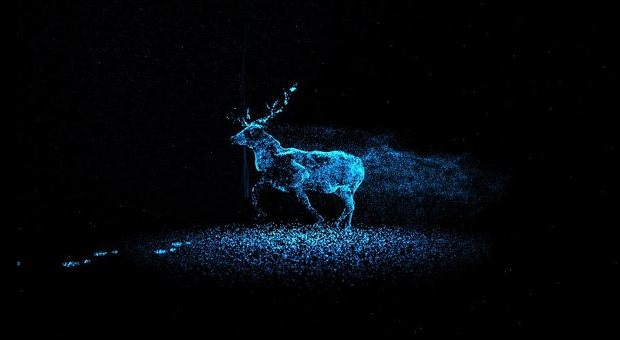 No more patronum jokes, this game is too “deer” to me

Sometimes I’m just not jonesing for a rust-colored horizon or cel-shaded paradise. Sometimes I want something completely different when it comes to video game aesthetics, and A Light in Chorus looks to deliver just that. It showcases a cacophony of neon sparkles in the night, a million tiny particles in the pitch black that look like dazzling gemstones in the night sky. You might even say it looks like a rainbow in the dark. Miss you, Dio.

A Light in Chorus is the brainchild of former art students Eliott Johnson and Matthew Warshaw. No one knows where the minimalistic environments and their ethereal glowing particles originated, but speaking to Eurogamer, Eliott Johnson divulged his plans for them, including altering the way we view objects as immobile and definite on this plane of existence.

“A lot of the gameplay revolves around points being reorganised and reconstructed into different objects (this would be the thinky/puzzly side of things). Likewise narratively, we’re interested in how this enables us to tell multiple overlapping stories, as opposed to a single grand narrative that you uncover incrementally.” So, in essence, it’s like Seth Brundle disappearing from one pod and re-emerging from another, having become Brundlefly. Almost, but not quite.

What’s really intriguing about A Light in Chorus is its creators’ desire for going with the flow, allowing players to swap between first and third-person perspectives while still in control of the particles. With this kind of gameplay, it should be easy to go with the flow, relax, and let the visuals take you away. While the game will focus on puzzles and interacting with the environment, the goal above anything else will be to explore.

Me? I just want to check out all of these gorgeously detailed particle environments. The game is being developed for PC, but when speaking to Eurogamer, Johnson divulged other platforms may be possible as well. Like clockwork, we’ll probably be able to expect it on next-gen consoles as well, as the PS4 looks like it was just made for games like these. A Light in Chorus, you’ve got a killer scene there, man.