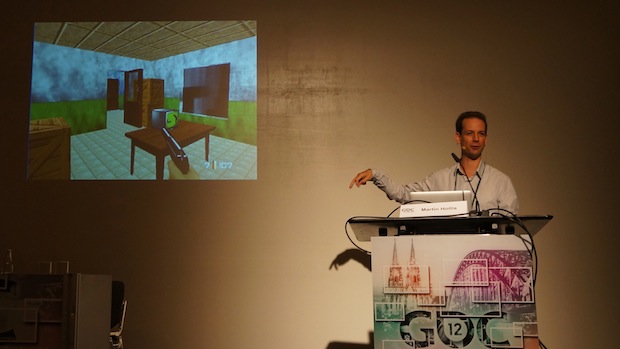 Martin Hollis, director and producer of GoldenEye 007 on the Nintendo 64, gave a postmortem on the development of the critically acclaimed shooter here at GDC Europe today. One of the more fascinating, and somewhat hilarious, aspects from the talk was how Martin went about giving 007 a quick last minute fix to save themselves some time.

Martin interviewed his past team for the talk, and was reminded of this particular incident by his former programmer Mark Edmonds, who considers it his “craziest coolest time” during the development. Basically, Martin hacked the game to fix a bug while 007 was in the middle of final certification at Nintendo.

Rare had sent the game off to get certified, and all was looking good until an issue was brought up during the two weeks of straight intensive testing at Nintendo. They had found an issue where textures would get screwed up for the characters on the Frigate level depending on the order of how players had gone through the levels due to an issue with the memory system.

“It had a dynamic memory system,” Martin told us. “It worked okay most of the time but memory was very tough. In order to make a minimum change, that day I wrote a tool to extract the code and the data from the ROM. I wrote that, adjusted the memory numbers, re-GZipped (a method for file compression and decompression) it, worked it back into the ROM image without recompiling anything, and sent it to Nintendo.”

This revelation gave all of us at the panel a good laugh. “I don’t know if that was the best way to do that or not,” Martin added, which brought about even more laughs from the audience. But for him, “it was a minimum change, [and] it worked.” I’ll have more from Martin’s talk and an interview in the coming days.