Press Play proved it can make a platformer with Max and the Curse of Brotherhood, but it wasn’t meant to test your muscle memory and invite speed running. It was a colorful adventure with some charm and plenty of stopping for to draw with the magic marker.

With it’s newest project, Press Play is dialing up the pure platforming with a minimalist design and some nasty platforming hazards. Nasty meaning cool. The point is I got into a heck of a comfortable groove with Project Totem and maybe you should too when it comes out.

Project Totem is called Project Totem because you play as severed rungs in a totem pole. Simple enough. But you plays as rungs, plural, with an ‘s.’ That’s how plurals are made. In some languages. Anyway. That’s where there’s a nice twist, as you control two totems simultaneously.

The minimalist style doesn’t default to pixel art or faux 8-bit. Rather, the inspiration stems from graphic design, so expect menus full pleasing colors and nice triangles. I hear blue is calming. The gameplay, on the other hand, owes itself to some classic design and a few contemporaries; for example, doing what Super Meat Boy still deserves credit for, it gets you back into the action fast post death.

And unless you’re super talented and handsome and great at cooking like me, you may be dying often. Sometimes you’re meant to as fast paced portions are designed to mess with you and trip you up on routine movements. It’s not broken or malicious. It just plays on how we can get psyched out in platformers before muscle memory helps us breeze through.Anticipate jumps that aren’t there. 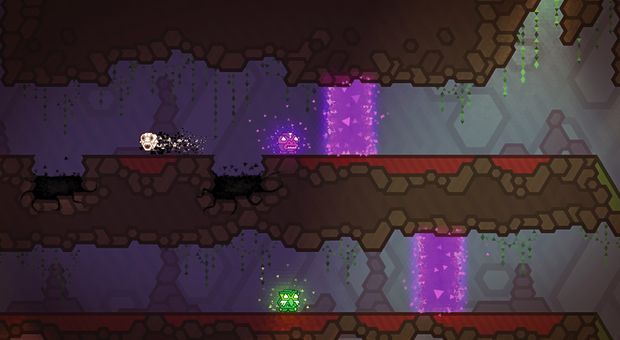 In that sense, Project Totem is a bit like two different games. Much of the first run through involves learning how to work the puzzles. You start with consistent movement on your totems, making jumps in time, but alternating terrain occasionally loses perfect reflection and you have to be aware of where they both are.

It only gets more complex. There are colored gates that only the same colored totem can get through requiring a button press to swap spots, sometimes quick and often. There are also bits of magnetism that will attract or repel totems, which go beyond walking on the ceiling.

Often you have to jump large gaps with momentum, repel the totem away, and attract it back before you’re carried into a hazard. Sometimes you’re oscillating back and forth for a while. You’ll also get stackable totems of the same color, double jumps, and a couple other abilities. 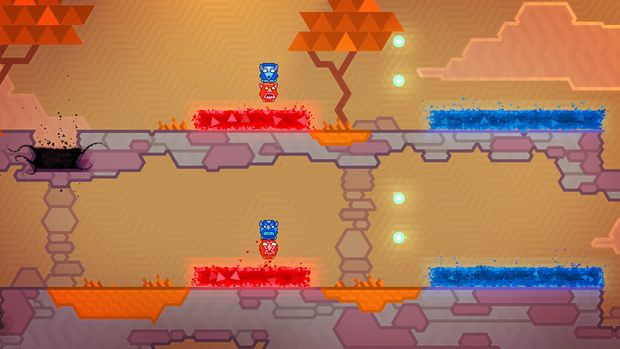 Once you can nail the levels as puzzles, you can work on the equally satisfying prospect of speed running and time trials to propel yourself on the leaderboards.

All runs earn you totems that stack on your personal, growing pole. And you can compare your pole to all your friends’ and see whose is bigger. But it’s not just whose is bigger. The better the run — faster times and fewer deaths — the better your totem reward. It’s the difference between a blinging totem and a piece of plywood.

There will also be a daily challenge wherein one winner takes home a special totem piece. The team also hopes to implement ghost data to race against directly, but doesn’t want to spoil puzzles. Leaderboards will be there at the least. There’s a separate co-op mode — local only — available at the onset where you’ll both control a couple totems and have to work together to get through levels. Communication and coordination is key. Or telepathy. 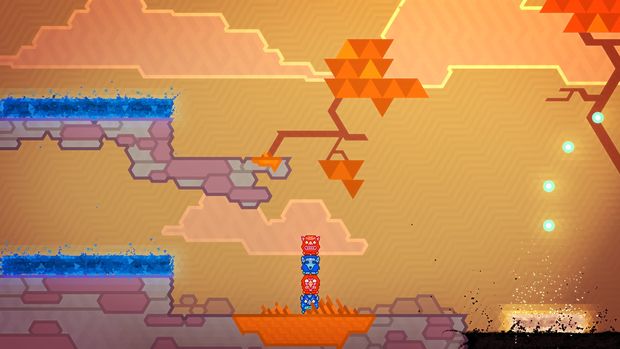 I fell into Project Totem‘s rhythm quickly and happily. All those years of ill-advised multitasking and split attention paid off. Who says you can’t text and drive?