This beta isn’t just for show!

When it comes to video games starring the Gundam franchise, it stands in an odd spot.

Despite the anime being popular around the world, the games, which cover numerous genres and come out frequently in Japan, are nowhere to be seen internationally. With the last home console game, Dynasty Warriors Gundam Reborn, having been released three years ago, fans have been hungry for more Gundam. Namco appears to have heard their cries with the release of Gundam Versus for PlayStation 4 planned for later this month. As you can probably tell, I’m very excited for it.

A beta was released that ran over the course of September 2 to September 4. I roped in our own Bass to give the demo a try. He hasn’t tried anything in the franchise whatsoever, only heard snippets through me, so I thought it’d be interesting to get an outsider’s opinion on the matter. That way you can get the perspective of someone who likes Gundam, and someone who would be more focused on whether the gameplay appeals to him.

I swear I’m the unbiased one in this case.

Mike: So, Bass, as someone who has not watched or played anything Gundam, how would you describe your experience with the demo in one word?

Bass: Overwhelming. There is a lot to take in here!

Mike: I’m not surprised. There are a lot of mechanics to take in, yet someone at Namco dummied out the tutorial for the demo!

Bass: Right? On one hand, I do want to give props to the developers for including so much content in this beta/demo. It’s not every dev that would give you survival modes, quests, and functional multiplayer in a free product, and the roster here was absolutely massive. But at some point, I feel like less could have been more here? When you give me a roster this large right out of the gate, with so many mobile suits looking alike, that’s one hell of a learning curve.

Mike: Yeah it definitely is. Choices are good, but after a certain point it becomes more of a negative than a plus for some people. That being said, was there any particular mobile suit you settled on after you spent some time with the game?

Bass: Buddy, you’re the expert, not me. I ended up going for the few names I recognized, like Turn A and Char’s stuff, but the overwhelming majority of the cast I haven’t given a shot to yet. For a 3D fighting game, I did find it interesting how different the movesets were. On one mobile suit, the square button would fire bullets towards the enemy, while with another you’d end up throwing spiked balls. But that in itself was another element of complexity, as it meant I couldn’t reliably know how to play a character after learning the basics with Turn A Gundam the hard way. 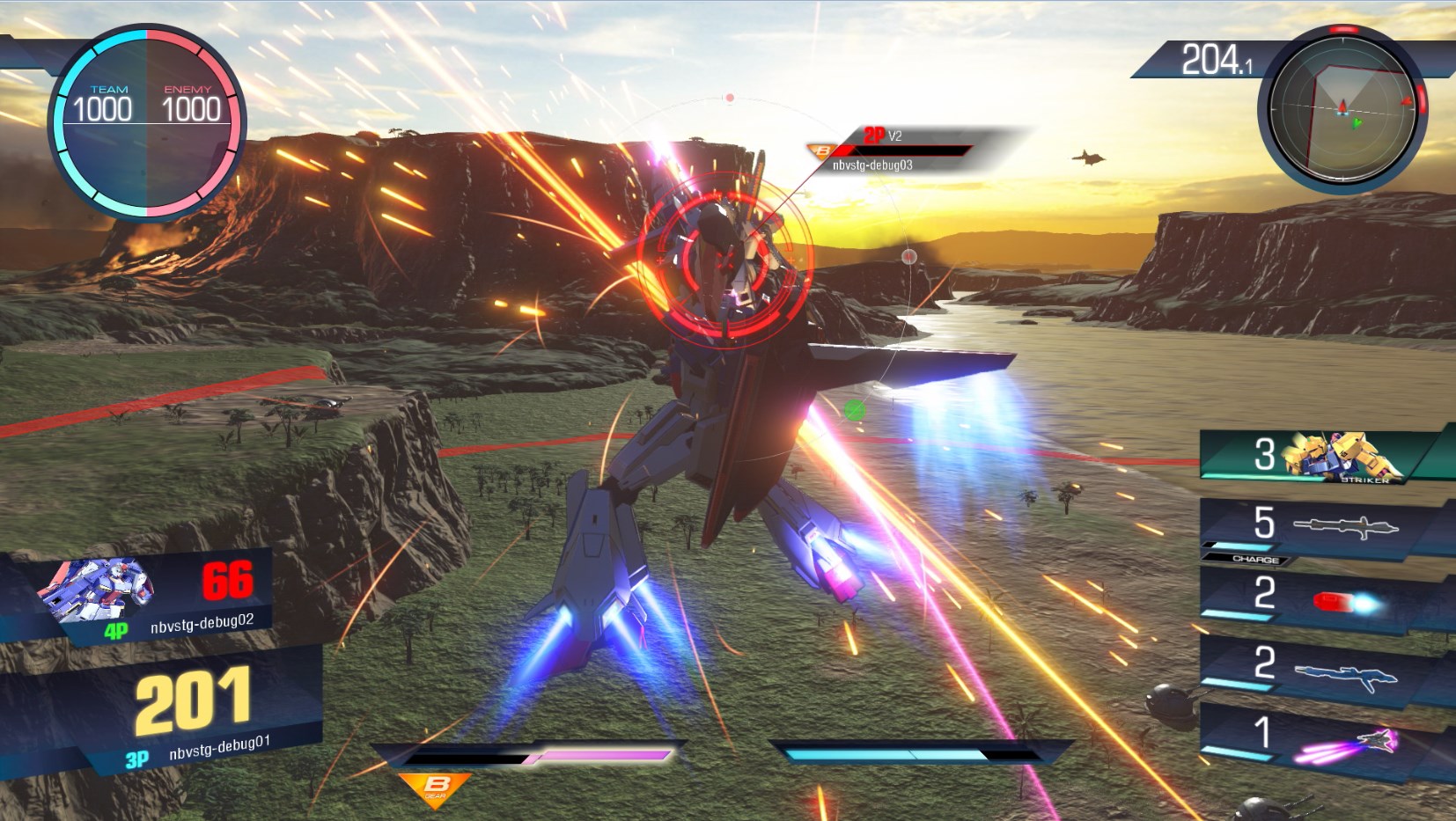 Mike: Understandable. I was the same way, generally staying away from stuff I also didn’t really know. I don’t know if you experienced it, but I had a hard wake-up call on a couple of mobile suits that turned out to be ranged or melee only beside two I had known previously. I eventually on a couple, such as the Turn X and Quebely MK-II, which you saw in action when we did Ultimate battle. Speaking of the mode, what are your thoughts on it?

Bass: I liked it! Especially in co-op, it feels like it’s currently the best way to get a hang on the characters. Regular battles ended up destroying me, but Ultimate Battles (which is just a fancy way of saying survival) is more lenient by letting you recover every five rounds or increasing your stats the way you want. I still have a few gripes, however.

Mike: I have a feeling I know what some of those gripes are. Would one of them happen to be a complete loss of progress if you disconnect from your partner at any point? Because that happened in our first run and oh boy was I not happy. We were doing so well!

Bass: Yeah… In general, the online elements in this game felt fairly unrefined? Like you said, losing your connection makes both players lose their entire Ultimate progress, but there were also concerning lag spikes. Normally, you’d expect a game to have one of two behaviors when lag’s involved, either the characters start zipzooping around, or there’s a desync between players that gets fixed at a slow interval. But here it seems the game just slows to a ridiculously low framerate when the connection is poor… Not exactly pleasant. Considering this game already released in Japan, I’m not sure being a beta is a good explanation for these issues. Though at least, the majority of the time it felt smooth and responsive enough. As responsive as it gets for a game where I’m just button mashing because I don’t know what anything does!

Mike: I half wonder if the online portion was built with only Japan in mind, before the decision to launch internationally happened. I actually took the 3vs3 mode for a spin, which is new to this game, and every single time the room crashed. It’s like polar opposites for all intents and purposes. When you’re offline or playing with a friend with a great connection, it’s perfect. But the moment you get into a six-player situation, and even with the standard 2vs2 mode sometimes, the experience just takes a nose device off the deep end. I have a bad feeling that in the full release online regulars will retreat to the private rooms, where they can restrict who joins based on connection strength. 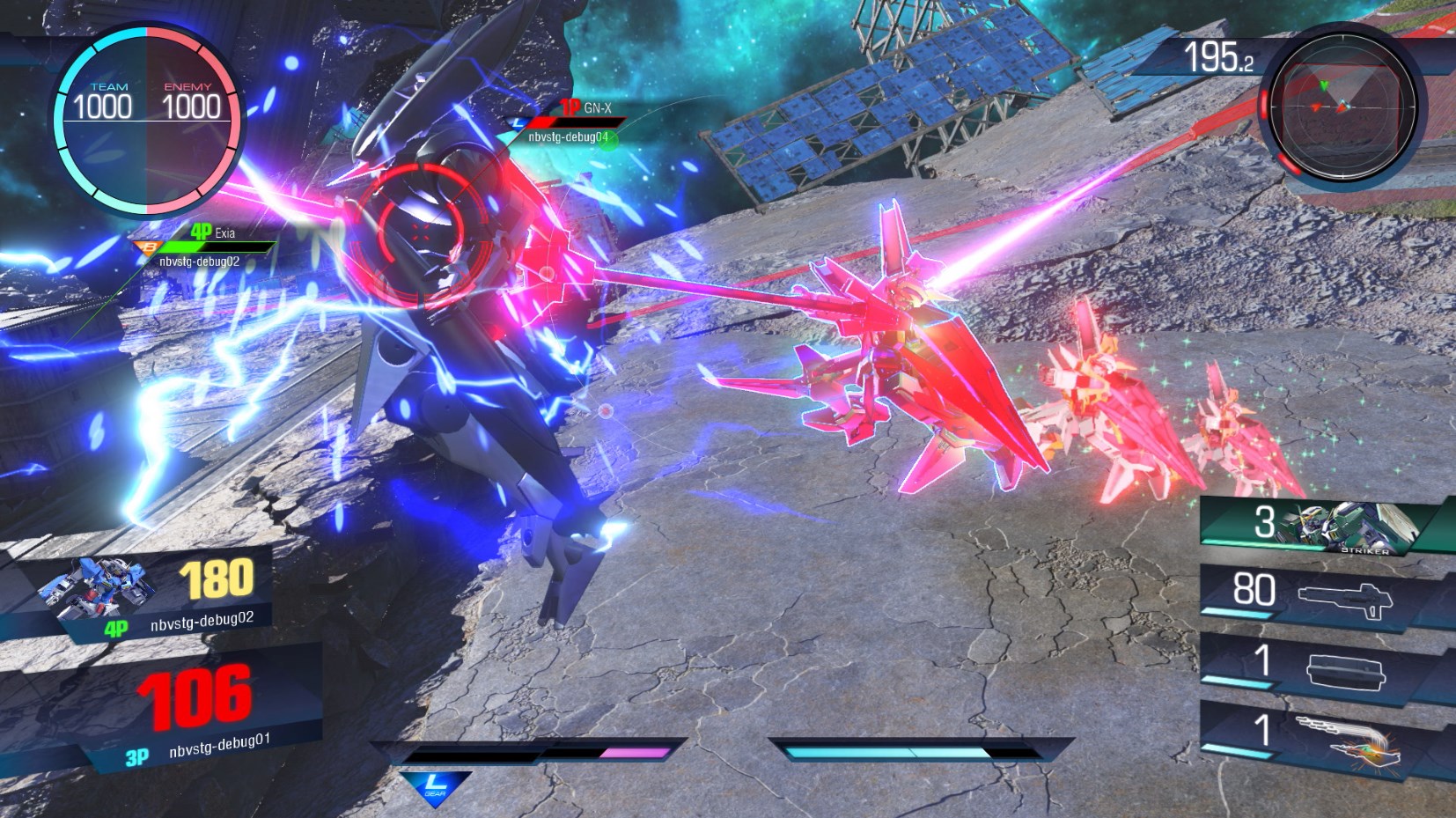 Bass: There’s that option at least! Beyond the online issues and general confusion, I had fun though. There’s a satisfying weight behind melee attacks, and fighting multiple enemies at a time means you always have to be mindful of your surroundings. The skill ceiling seems high for the elite competitive gamers out there. How was it as far as roster and fanservice goes? I’m totally out of my league here, but I did appreciate the little description snippets that came with every mobile suit. It did a decent job at quickly explaining their origins.

Mike: It’s a good roster in my opinion. Yes, some series like G Gundam and SEED Destiny are missing, along with some prominent characters like Athrun from SEED. But what’s there is a very solid selection, and there’s stuff there that isn’t in the beta, such as alternate pilots for each suit. One of the Victory mobile suits has four unlockable alternate pilots in the final game for instance. I just wish though that opening lines and win/lose quotes were subbed, because I heard characters say the names of their partners sometimes, and in some cases those characters never interacted before. Just one of those little details that, if it existed, would go a long way for fans and helping establish who characters are for non-fans.

Bass: I’m glad you mentioned that. The lack of subtitles (or English voice acting) really sucks! I’m sure I’m not losing on too much with the quotes at the start of battles, but I like to understand the dialogue I hear. Hopefully the final game will feature that… Assuming I didn’t miss that in the options to begin with. Without it, then… I feel like there’s little advantage in having a western release over importing this game? Apart from the availability, of course.

Mike: You’ve pretty much summed it up. Outside of availability, the only advantages would be translated menus as well as not needing a Japanese account for DLC. Although I did find it extremely odd that the Navigator feature, which for the demo was limited to the character Haro and was forced on during Ultimate and Trial mode, had every line translated. I get the sole purpose of the feature is to talk and commentate, like Rise in the original Persona 4 Arena, but it just helps make the lack of subs elsewhere stand out more.

Bass: Huh, I didn’t realize that. How strange! Now for something totally different, I want to talk about the one thing that confused the most in this demo. All the mobile suits have a number value associated with them, right? And when you’re playing in a team with an AI in survival mode, their value is halved. And lower-value mobile suits have bios that describe them as being weaker. So I just thought that meant that the game had a built-in tier system, and that I should always go with a higher-value suit! 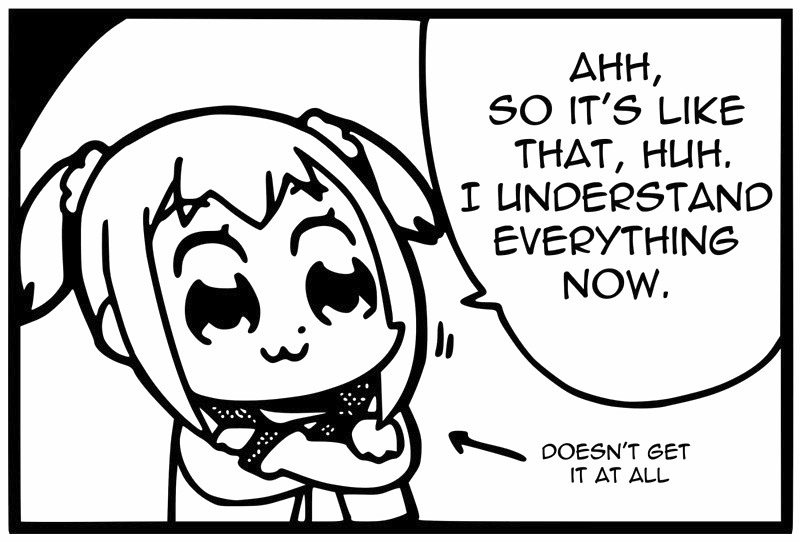 Except that wasn’t it at all. I didn’t realize because I didn’t die enough yet, but the game has a super weird life system where there’s a point total and every time you die, you subtract the number associated with your suit and respawn again. That’s a cool mechanic! But also not the most intuitive one… I hope the in-game tutorial, when it arrives, gives a proper guide on how to pick a good suit for maximum survival depending on your play style and team composition and what not.

Mike: I really like the system, as it helps maintain the status of power certain mobile suits have compared to others. Halving the AIs point value in modes like Trial and Ultimate is also smart decisions by the developers, as it lessens the chance of the AI wrecking a good run you had going on. However, like you said, without a tutorial, it’s not immediately clear to the players how it works,what an ideal composition is, or even what point value a newcomer should start as. Without knowing what the tutorial that was left out has, it’s hard to say how well the final game does at teaching the mechanics.

Now for the final and hardest question. As someone who took the beta for a spin, and has never experienced anything Gundam before, would you consider picking the final game up at some point down the road? If not, what more do you feel the game needs in order to convince you to pick it up?

Bass: Personally, I’m not convinced yet. Recent years have been packed with fighting games, and I don’t have the fanservice element working for me either. But, the base combat did seem fun, especially if I put enough hours in to get past its scary learning curve… My main concern that I absolutely want to confirm with the game at launch is the quality of its online mode. It doesn’t look like the retail game will have a story mode, so once quests are over I’d want to play online as much as possible both co-op and competitive, and if I’m going to end up with similar disconnect issues or tanking framerates that this beta has, I will be disappointed. What do you think?

Mike: That’s definitely the case. If the online improves for day one, everything will be fine. However if it isn’t, then I can see many players, both casual and competitive, ignoring it for other options, like the upcoming Dissidia Final Fantasy NT or Marvel vs. Capcom: Infinite depending on their tastes. I’m personally in the boat of I’m getting this regardless, because I like Gundam, I like what I’ve seen, I like how the beta played, and I want to support it in hopes that we get more Gundam games like the Breaker series.

Bass: You want to make me buy your game, Namco? Just confirm my favorite mech warrior as DLC.

Mike: And just who is your favorite mech rider? 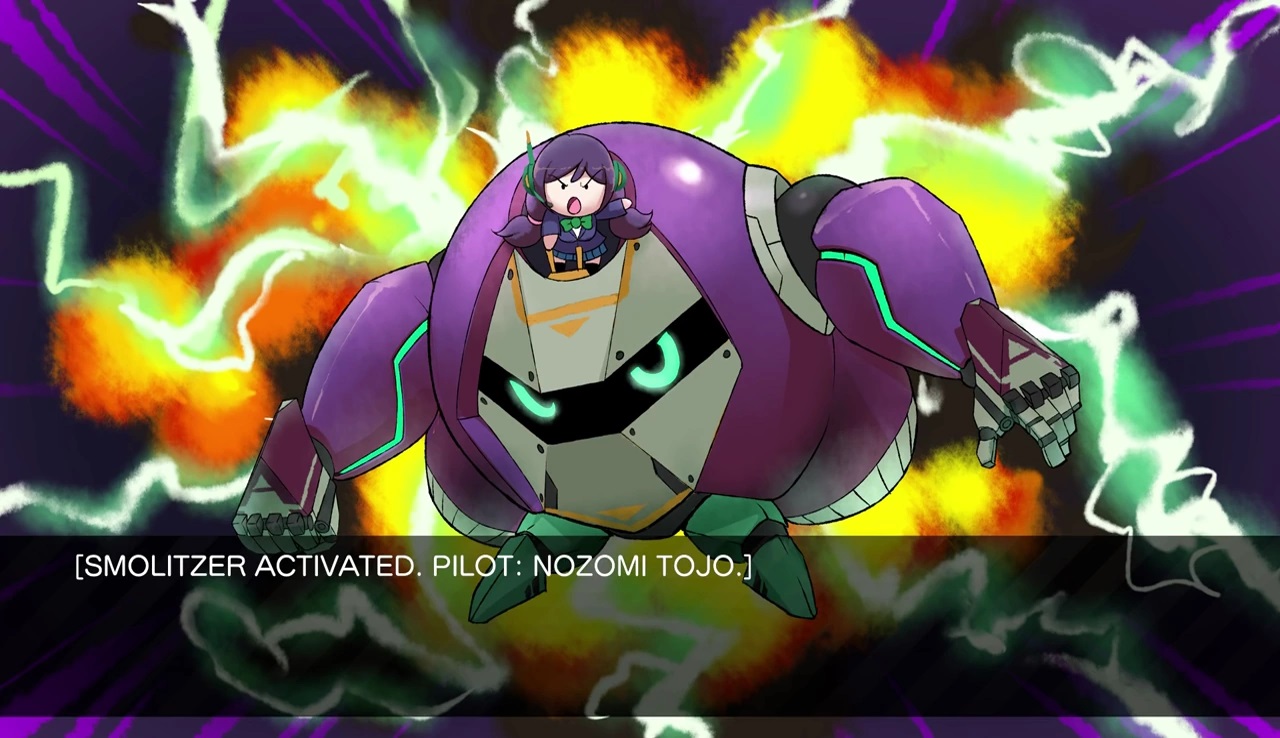