How many branches make a good ending?

A handful of days ago, I finished my first playthrough of The Walking Dead: A New Frontier. I was taken aback by how multi-faceted the run-up to the final moments turned out to be: lots of important choices, lots of different approaches that depended on your opinion of certain characters, and multiple potential missteps were present in the final chapter.

I discussed this with my boyfriend, who has only played the first season and was shocked that Telltale had even gotten to the third. His experience of Telltale games was a binary choice right at the end, a few deaths of slightly annoying characters here and there, and, really, the feeling that the player did nothing of much importance while experiencing the story.

My experience of The Walking Dead: A New Frontier was decidedly different. I felt like I had impact; that I was taking care of a mixed community of characters, and in my case, often condemning the bad apples to a grisly death. But which approach to storytelling did I prefer? Two choices at the end? Three choices? A mixture of potential outcomes? In hindsight, I think I might prefer the binary approach of season one of The Walking Dead above anything else.

(Needless to say, this article contains spoilers for seasons 1-3 of Telltale’s The Walking Dead.) 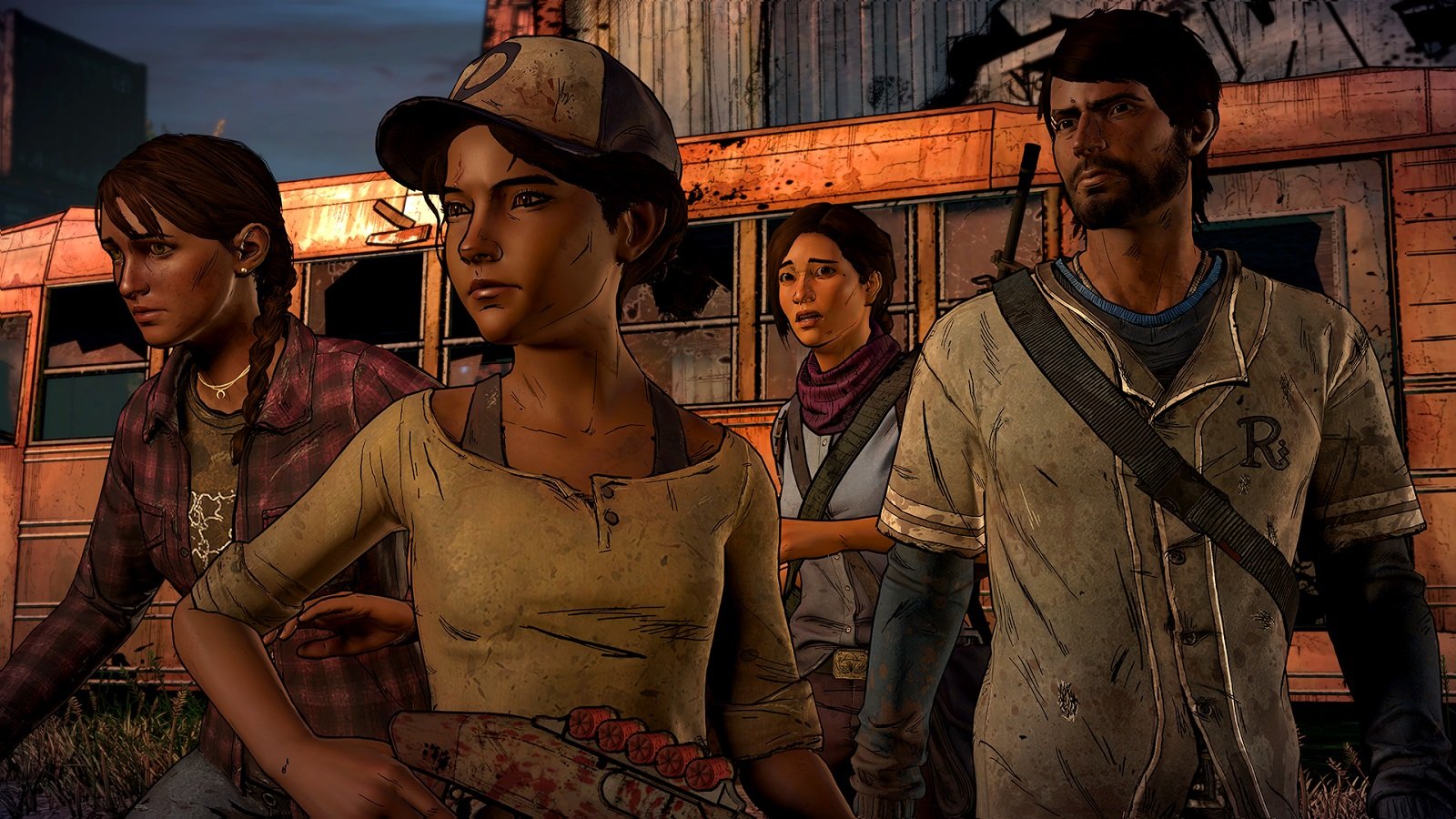 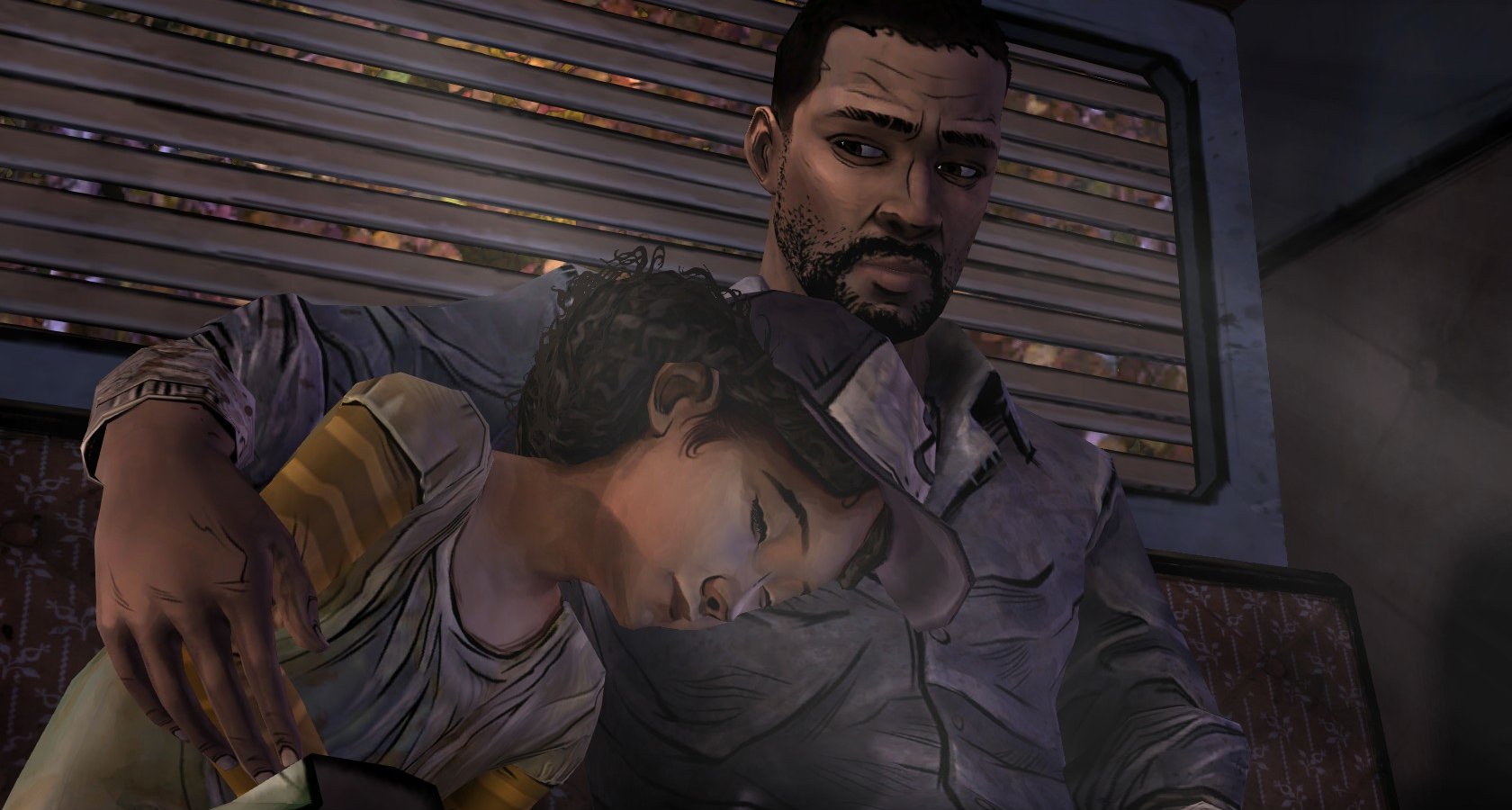 The final scene of the first season of The Walking Dead is probably the most famous, and yet the most binary. Clementine, a young girl found in her Alabama home after the onset of the zombie apocalypse by the protagonist, Lee, is faced with a decision no young girl should have to make. She has to decide whether to put Lee, who has become something of a father figure to her after the demise of her entire family, out of his misery with a handgun. Lee is on the edge of death and will certainly “turn” once he has passed, and the two characters are currently trapped together in a storeroom. Does Clementine end Lee’s life, granting her caretaker a few final moments of dignity and, in turn, stopping herself from becoming zombie chow? Or is Clem unable to pull the trigger?

It’s a scene that had many Let’s Players in tears and is one of the toughest decisions in a Telltale game – though the only logical choice, really, is to euthanise Lee. It’s one simple choice that has more than an episode worth of build-up behind it, starting with the bold move for the protagonist to be bitten (pretty much out of nowhere and with no way to avoid it) in episode four.

There are a few tricky decisions along the way, such as whether to shoot the son of Lee’s new best friend, who has turned into a walker, and whether to leave the ineffectual Ben to die (you’d better believe I almost kicked him off that tower). You can even choose to cut off Lee’s arm in an effort to prevent his death, but this turns out to be fruitless. One character can die at the expense of another, and there’s a loose cannon that you have to tread carefully around. Really, though, the game leans heavily on this final decision – everything else feels like a side-story, however enthralling it is. Because it’s executed so beautifully, I barely minded that the game ended with such a blunt, yes/no decision. 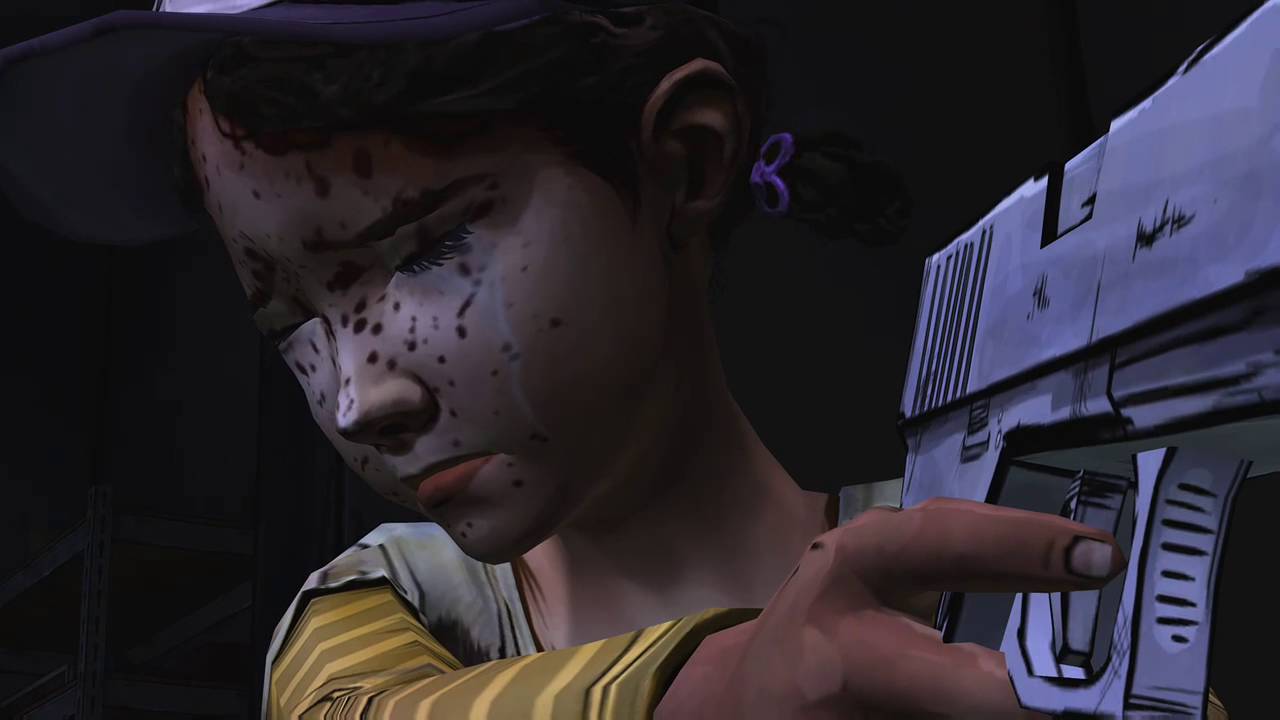 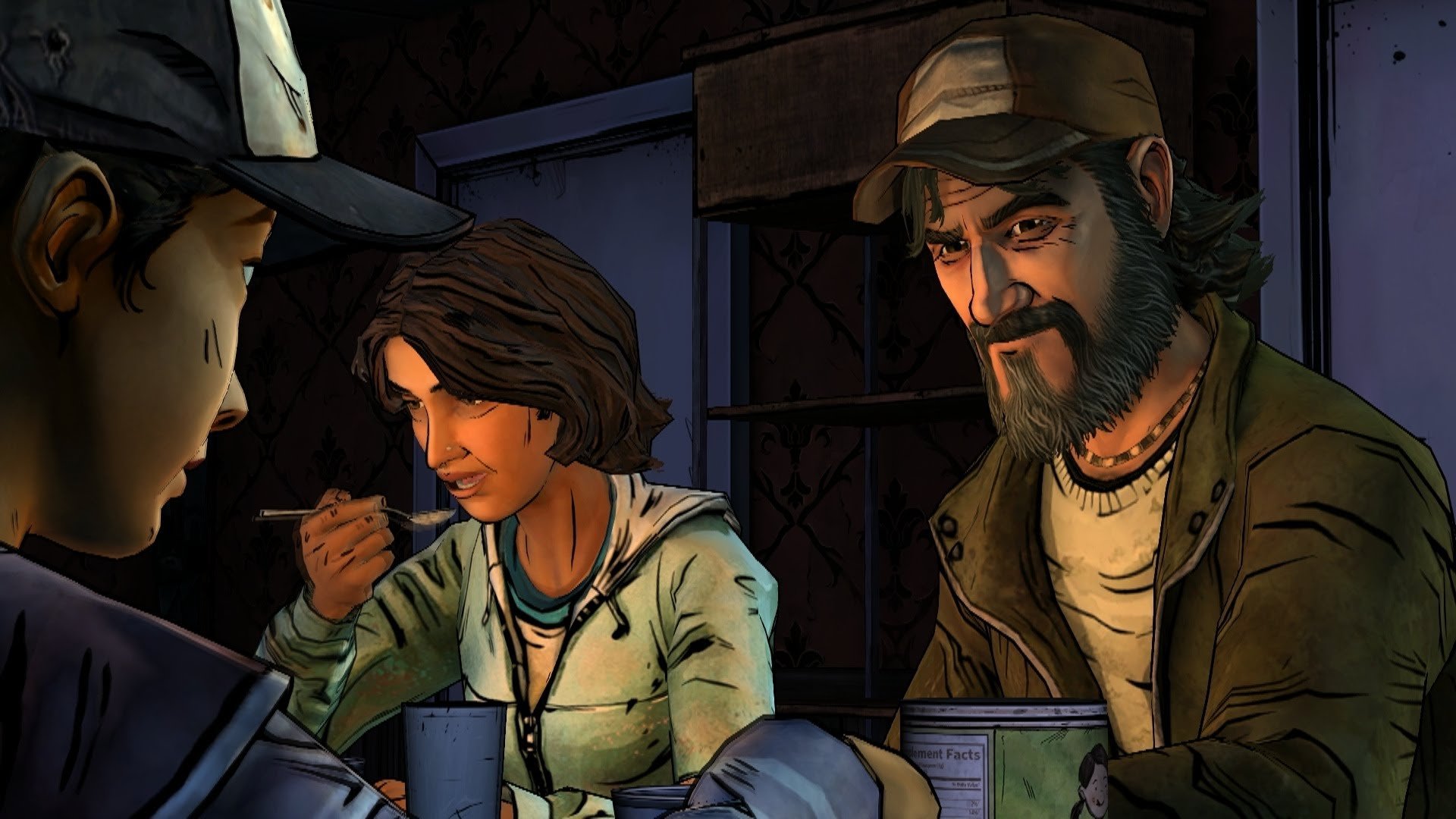 The finale of season two of The Walking Dead makes things a touch more complicated, with three different paths. After the traumatic scene with Lee in season one, Clem has floated between various groups, trying to find people she can rely on and that will give her some semblance of normality in a world still ravaged by walkers.

At the end of season two, that dream of a stable life is clearly going down the tubes, as Clem is torn between Kenny and Jane, two potential guardians who can’t stand each other. Jane is very much the Bear Grylls/Ayn Rand of the game, slathering herself in walker guts to sneak past hordes and believing in cutting off the weak for self-preservation. Kenny (Lee’s best friend in season one) is irreparably damaged after losing his family. While he serves as a friendly face, he can barely hold himself together, never mind look after Clem and her de facto adoptive son, baby AJ.

The two adults get into a vicious fight when Jane tricks Clem into thinking AJ has been eaten/kidnapped; Clem can kill one of them and go off with the other to a new settlement, or she can denounce both of them as a few crayons short of the full box and go it alone.

Since the release of season three, I feel like the “correct choice” has become obvious. Clem is built up since the middle of season one as someone who could be a true survivor, and who is better struggling along by herself. While Kenny is in many ways an admirable character in season one, he is very unstable in season two. Jane also has a black-and-white view of the world, and is too into game-playing to be a truly helpful ally. So, the choice at the end of season two doesn’t really feel like a choice to me anymore, but instead, serves to emphasise that Clem can take care of her own basic needs better than anyone else. I quite like this twist, though it is a little more contrived than the simple approach of the previous season. 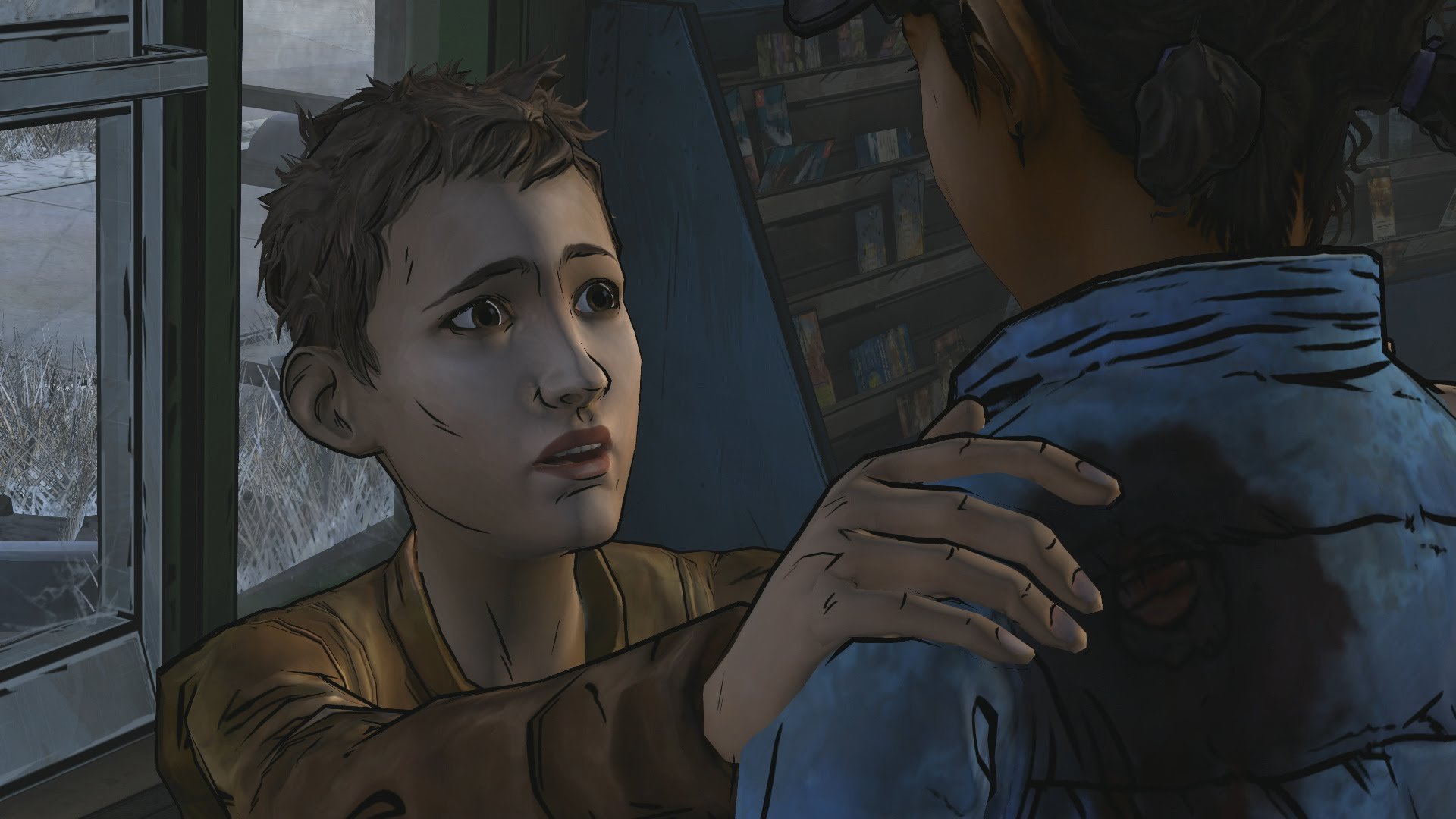 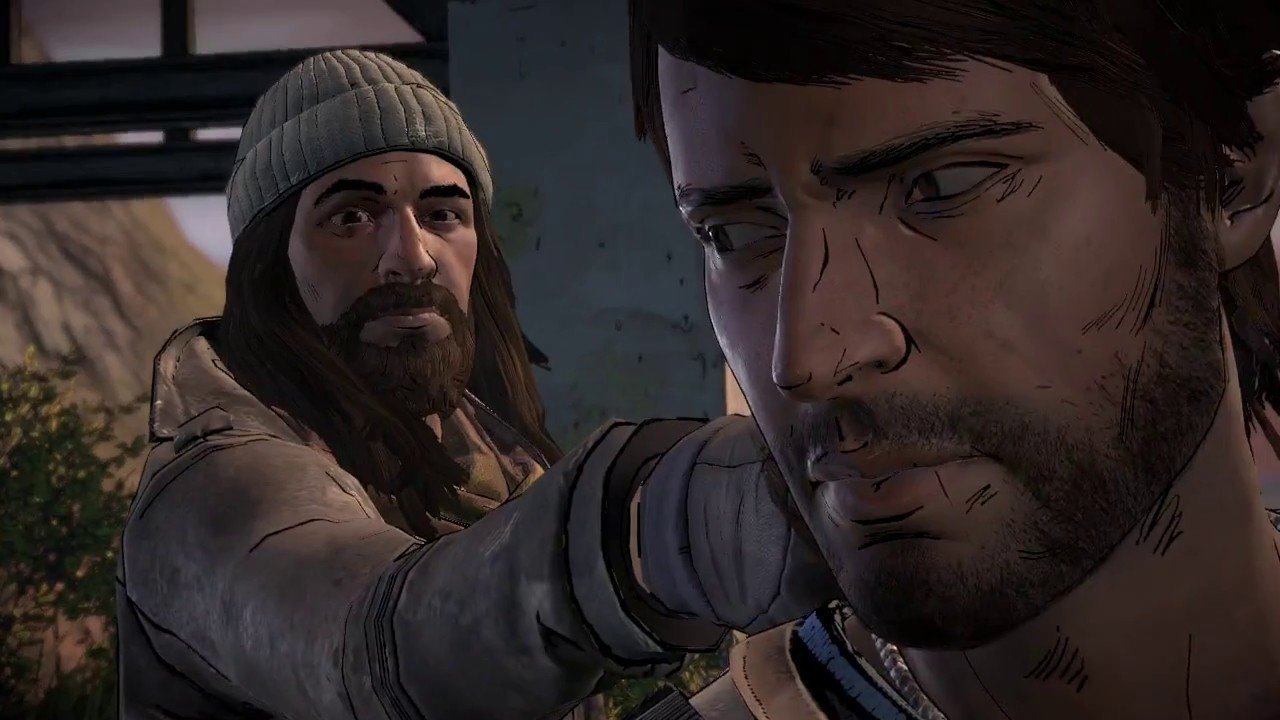 …Yep. To those unaware, there is indeed a character in season 3 of The Walking Dead (and the comic book series) called “Jesus”. It is a nickname, though – the firm-but-fair character’s real name being the more earthly Paul Monroe.

To me, season three put more emphasis than the other seasons on family and the communities that built themselves up, somewhat successfully, once the walkers moved in. As a result, rather than acting as a strong protagonist, Javier felt more like a fairly agreeable yet milquetoast main character. His seedy back-story as a failed baseball player/gambler was never explored satisfactorily in my playthrough, but so many of the cast of characters had their own tales to tell, and deaths to side-step, that I didn’t feel like I needed to know more about Javier. Kate’s failed marriage to David, Mariana and Gabriel growing up in zombieland, Prescott’s ability to flourish as a safe community…the rich story was spread quite thinly, so I found plenty to explore elsewhere. This also meant that the ending had more loose ends to tie up.

In Javier’s family, at least someone is on a path to death (beyond Mariana’s death in episode one). In my playthrough, David had long since expired when I reached his abandoned car, with Gabe putting the bullet in his skull. I hated David throughout the entire game, so I can’t say I was sorry to see him go. But Gabe could die, sharing a final kiss with Clem (Clem is back!), and Kate could succumb to the walkers. Even if you get a satisfactory ending with your “family”, you can choose whether to lead a new community in Richmond, the New Frontier’s former stomping ground, or put your family first. There is also the choice of whether to encourage Clem to look for AJ, who has apparently been adopted by another family outside of Richmond.

You could say that whether Kate dies, whether you support Clem, etc. falls into the same category as minor decisions in the earlier seasons, such as whether you condemn Ben to a gruesome death in season one, or chop Sarita’s arm off in season two. However, season three deliberately focuses less on a single protagonist, instead underscoring successful community, while season two does much more to depict a failed community. As a result, everything that happens in episode five of season three feels like a crucial part of the ending, rather than a footnote.

This does make the ending to season three less focused. While earlier seasons could be divided into courageous and less courageous endings, the picture is more diffuse for season three, with a description at the end of the fates of around eight different determinant characters and the nature of Javier’s four key relationships. While it is all still very well executed, in a way, I wanted to go back to the simple ending of season one.

Of course, there was a motivation for a more complex ending to season three: the path for season four has already been paved. The final season of The Walking Dead is set to follow Clementine once more, as she finally finds out what happened to AJ when he was taken away from her in the events between seasons two and three. Maybe we will even find out what happened straight after she pulled the trigger on Lee… 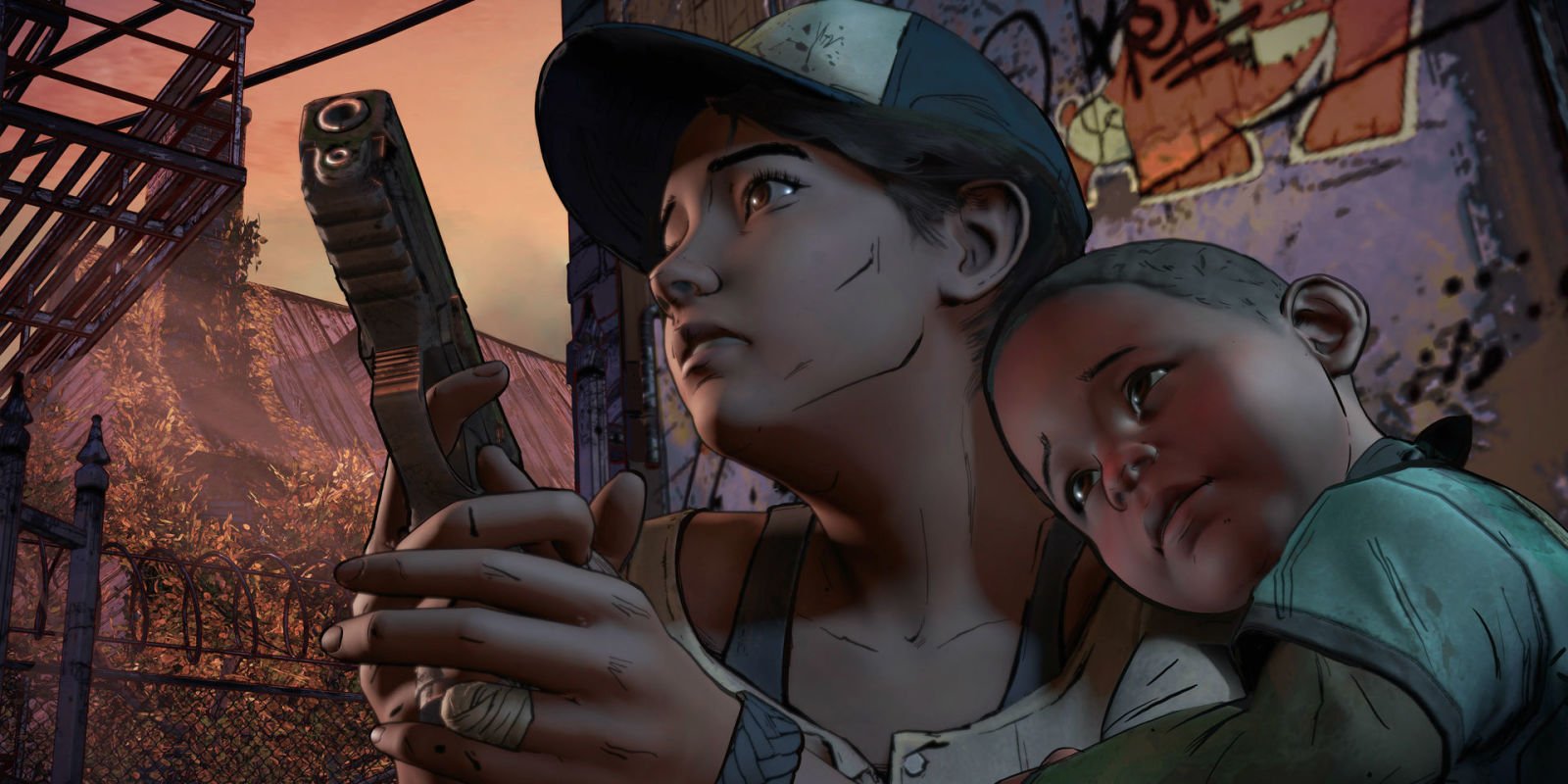 Did you prefer the simplicity of the season one ending choice? Or was the complex collage of season three more your speed? Let me know in the comments down below, and share your excitement for season four of Telltale’s The Walking Dead, coming out this year!