Roll up, roll up one and all, and come bear witness to the greatest cavalcade of videogaming curiosities known to modern man. We’ve got freaks, we’ve got geeks, we’ve got things the mere sight of which will make your eyes bleed, and they’re all yours for the paltry price of a click.

Actually that’s a lie, but we do have another gamer species described and analysed for your perusal, education and edification, as is customary around this time of the week. 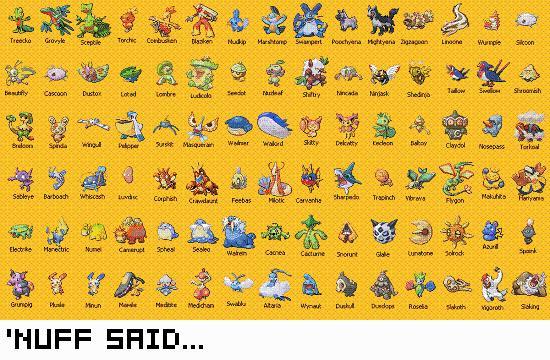 Human beings like having lots of material possesions around us. This is a fact. Evolving as a hunter-gatherer species with a pack mentality, we’ve always liked to go out into the world and claim little pieces of it as our own in order to bring them back home to addorn the metaphorical cave. We like to stamp our mark on the planet by finding the things within it that appeal to us and making them ours, and we complete this assertion of identity by using these things, be they food, tools, materials, or merely trinkets, to provide for our pack, improve our living conditions and personalize our surroundings. When it isn’t taken to the hedonistic extreme of greed, this process is a perfectly benevolent one, existing only to improve life for ourselves and our people and to make physical our psychological identities.

As videogames have become more complex and realistic, this instinct has spread from the physical world to the virtual realm, the desire to build and fashion our own personal environment finding a playground of infinite possibilies within the many digital habitats we venture forth to explore. Thus, the collecting gamer has been born.

The collecting gamer’s habits might have initially formed themselves in the real world, his inherent need to source, secure, and hoard whatever items he deems valuable sculpting a well-stocked household of domestic and economic treasures of every shape and size. His domain is the land of the perpetually disappearing carpet and ever-shrinking wardrobes, where every item that has worth or may have worth in the future is kept safe and secure. His few items of weekly trash always feel lonely rattling around in the largely empty bags outside of his house, while his living space feels progressively like the darkest depths of the Death Star’s trash compactor. 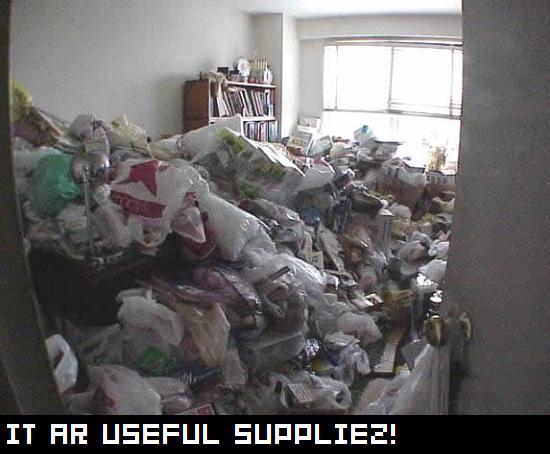 He’s okay with that though. What his home loses in terms of space to contain oxygen, it more than makes up for in terms of usefulness, provision for emergencies and plain old nice things to look at. Those shelves full of action figures and that forest’s worth of comic books? Classic pieces of cultural history and all-important rubber stamps of the aformentioned environmental identity. That broken collection of hardware, largely comprising of almost half the parts of a 1974 vacuum cleaner? Invaluable, should he ever happen to find the other half of said vintage cleaning device in need of repair. (Seriously, it could happen, you never know.) After the nuclear apoloclypse, the cockroaches will indeed survive, but they’ll be going round to his house to borrow batteries and car parts.

As a result of this, there’s a very good chance his gaming collection is a 3D encyclopedia of full software libraries for obscure hardware, all of which he also owns, along with every available peripheral and years worth of the related magazines. There are no half measures in this man’s life. If he’s passionate about something, he makes sure he’s as well provided for as humanly possible. He absolutely will not run out of games to play, and if he ever needs to remember exactly which treasure it is that he’s playing, his reference library of previews, reviews, character profiles and cheats is but an afternoon’s dig through the garage away. Needless to say, he’ll be the roaches’ first port of call when they fancy playing Secret Of Mana.

The pleasures of playing videogames are never-ending to him. Of course, there may well have been a time when he didn’t apply his real-world behavior to his gaming, seeing it as pointless. After all, what good were those coins if they were only going to provide him with some abstract “points” on a TV screen? They gave him no real advantages in life. But then one fateful day he heard a second noise upon accidentally brushing past one of those floating gold treasures, and took notice. 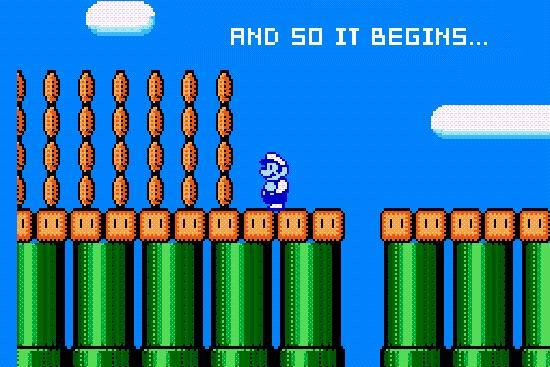 But then he noticed his lives-count and suddenly all became clear. That non-existent currency had provided him with extended play-time, an actual, tangible bonus in his material life. His real-world habits had paid off in the virtual world, and suddenly his gaming style changed forever.

Unhindered by the inconvenience of physical space, in videogames he is allowed to unleash his borderline obsessive-compulsive tendencies with gleeful relish. Coins or their substitutes are everywhere, and all potentially his. Extra weapons, ammo and health-packs too. Whatever genre he is playing, there is something to collect, and where other gamers may just find these pick-ups useful in a sticky spot, they are the fundamental part of the gameplay experience as far as he’s concerned. He might have wiped out every bad guy on the level, beaten the boss and got the girl, but if he’s left behind but a single armor bonus or left one hostage unrescued, that damsel’s getting dropped to the floor and won’t be picked back up again until he can come back with full arms and bulging pockets.

RPGs in particular are an almost heavenly joy to the man whose attic will soon to crush him and whose Katamari cellar-contents threatens to rise up and eat him on a daily basis. There is so much to find and so much to claim, and most of time the initial collection is only the beginning. Weapons, armor, items, spells, skills and vehicles, they’re all there for the taking, and then they’re all there for the upgrading. The collecting gamer has probably spent more time looking for materia and Chocobo grasses than he has looking for food to fill his real-world fridge. 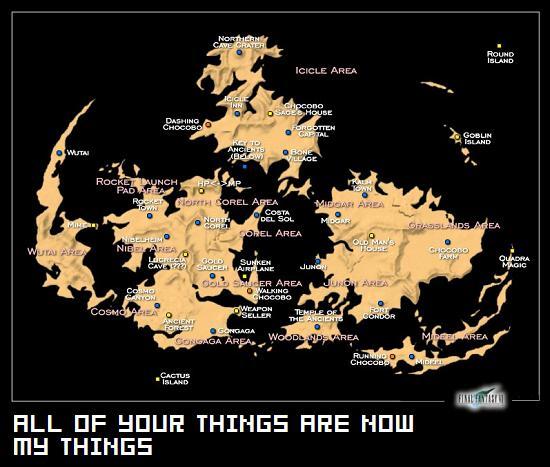 And the collections don’t even have to be visible. While the constant increasing of his currency stash is like a never-ending, ever-improving hand-job, EXP is just as legitimate a collection, with each levelling-up being all the reward he needs go go out and fight for more. “Why?”, he wonders, “Why oh why do they call it level-grinding when it’s such a constant pleasure?” The only sadness he ever suffers from an RPG is when he realizes his collections are limited by the inevitable maxing out of the in-game counters, but hell, that’s what expansion packs are for. Downloadable content was invented for this man.

But all of the above collecting is spurred on only by his own desire for in-game self-improvement and completeness. Things are taken to a whole new level when a game provides a reward for his conciencious behavior. A better ending, a bonus weapon, or nirvana of all nirvanas, an unlockable level full of new things to collect is all the vindication he needs from the game to tell him that he is playing it the right way. After all, if he wasn’t meant to be collecting, why are those things there? He takes them as a warm pat on the back from the developers, and merrily ploughs ahead to complete the righteous charge they have entrusted to him.

He never leaves a crate unbroken, a chest unopened, a body unsearched, or an box free from a head-butting. He is as thorough and as attentive as gamers come, and in his own way, as professional as the technical gamer. Truly, the collecting gamer is an inspiration to us all in the area of properly completing a game and getting our money’s worth out of every title we purchase. Now if only there were a few more achievements left...

Almost every game has value to him, as almost every game has something to collect. If there’s a power-up, or an extra life or even a scrap of health to be had, he’s there. He positively goes on vacation in RPGs and he’s completed Chrono Trigger as many times as there are endings. Needless to say, finding all of the Crackdown orbs was one of the most fulfilling experiences he’s had in years… What he does hate however, is the way FPS often don’t let him pick up health and armor if his stats are already full. He’s inflicted damage on himself more than a few times in order to collect them, and the one time a lack of enemies forced him to save without grabbing a couple, he couldn’t sleep all night.

Leave him to it. He’ll be perfectly happy doing what he does best. Communal gaming however, can be a problem. As with the aggressive gamer, be prepared for some very slow co-op as he clears every area before moving on, and never play a Mario game in multplayer with him. You’ll have died and rotted away to nothing long before your turn comes around.

And absolutely, positively, under no circumstances ever say “Yes” if he wants to show you his Pokemans. Not if you have anything else you want to do with the rest of your life.

Chapter 6 – The One Game Gamer