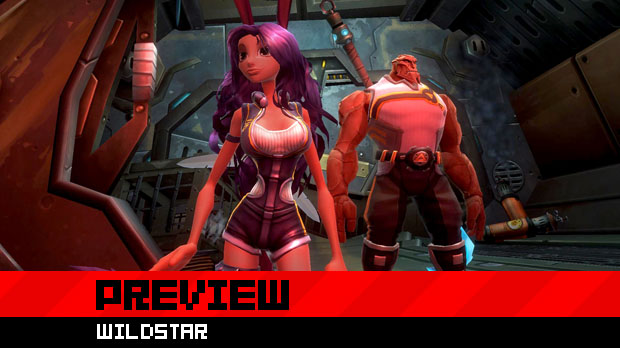 When NCsoft announced they had formed Carbine Studios way back in 2007, both companies were tight-lipped about what Carbine would actually be working on, aside from it being a new MMO. Almost four years later, Carbine unveiled WildStar at gamescom and PAX, and I was able to sit down and talk with the devs to learn just what WildStar is, and what Carbine is hoping to accomplish with the game.

Carbine’s presentation started out with some information about the studio. One of the things that they believe sets them aside from other companies is that, in their own words, everyone who works at the company is a gamer — even the receptionists. The company itself is made up of developers and designers who have not only worked on pretty much every major MMO that’s been released, but are also avid MMO players who are familiar with most games on the market.

What do they aim to do with all this knowledge and experience? Create the “deepest, richest, MMO experience” possible. They say their goal is not just to clone the MMOs that already exist, but to make a unique game that innovates the genre.

WildStar takes place on a planet called Nexus, which used to be home to an all-powerful race called the Elden. Suddenly and with no warning, the Elden vanished, and many adventurers have come to Nexus to either try to figure out what happened to them, or to claim for themselves all the artifacts and power they left behind.

As you progress through the game, you’ll experience what the developers referred to as “layered content.” Instead of having straight quest progression, moving from point A to point B, WildStar aims to do something more fluid. The gameplay still sounds quest-based, but the way in which you acquire quests seems much more natural.

The example we were given was from a starting zone, where you may initially be sent out to exterminate some of the local wildlife. Once you start killing the critters, you may notice that some are mutated, which kicks off a separate quest that charges you with finding the source of the mutation. While you’re investigating the mutation, you may come across a hidden cave that starts an entirely new quest line. You may get a random call on your transceiver once you get close enough to a certain section of the map, warning you of a dangerous monster you have to kill.

That’s just an example of one layer — as you progress through the game, Carbine says that you’ll be in areas that have multiple and increasingly complex “layers,” with the ultimate goal of eliminating the videogame trope of running back and forth between people with exclamation points over their heads.

Quests and layered content aren’t the only new things Carbine is attempting to do — they also have set out to design a system that lets people play the way they actually want to play, instead of being forced into roles they may have no interest in.

Many gamers may be familiar with the Bartle Test, a psychological profile created by Richard Bartle that aims to classify the way people play online multiplayer games. The four main types he identified are the killers, the achievers, the socializers, and the explorers. Killers mainly play because they love combat and defeating both enemies and other players. Explorers like discovering new aspects of the game and tend to search every nook and cranny. Socializers are mostly interested in interacting with other players. Achievers want to be as powerful as possible, maxing out their stats and getting the best items.

Carbine has taken Bartle’s test and essentially implemented it into the game. In addition to picking a race and class, as you would in a standard MMO, you also select one of four paths that essentially defines your gameplay goals for you, rewards you for your play style, and gives you abilities that complement the way you want to play.

If you pick the Soldier path, you get rewarded for excelling in combat and taking down huge monsters. Soldiers also have the ability to trigger large public combat quests — they plant a battle standard in the ground, and they and anyone nearby can take on big waves of creatures. Explorers are, naturally, rewarded for exploring different areas of the map and making discoveries. They can find and unlock hidden paths for their party, and can discover and open sealed-off dungeons.

Scientists are rewarded for collecting information, whether it be in-game lore or information on enemies. They carry around a scanbot, which can help them identify boss’ weak points, and also can scan the local flora and fauna for bonuses. Finally, the Settlers are responsible for building up towns and quest hubs, and can provide valuable buffs for characters who reside in their settlements.

I’m intrigued by the way WildStar is shaping up. It’s still pretty early on in the development process, so there’s quite a bit of work to do, but I really like the idea of the Path system. It’s also nice to see a team made up almost entirely of veteran MMO players and makers, since they presumably know exactly where other MMOs have made missteps. Those of you getting burned out on WoW and looking for a new MMO will probably want to keep an eye on WildStar — it’s definitely got a lot of promise.