Does slapping a jetpack onto a dragon sound ridiculous to you? Are you incredulous at such a prospect? You shouldn’t be. How the hell does such a beast fly without mechanical assistance? Dragons are big, buff enough to make one wonder if they are all on steroids, and — according to Skyrim — their bones are the heaviest things in the world. They’d need wings the size of a town to even get them an inch off the ground.

So, perhaps Larian Studios was being rather reasonable when they decided to develop a steampunk RTS with jetpack-wearing dragons. There’s probably a dragon physiology expert on the team. After making so many dragon-focused titles, there certainly should be.

This is not to say that Dragon Commander isn’t a little bit silly — there’s a snooty lizard man who keeps insulting you and the dwarves wear bowler hats and bling, after all. Yet, for every gag, there’s something underneath it that’s inventive and surprising, and most surprising of all is that flying through the skies as a technologically-augmented magical lizard was not the most entertaining aspect. 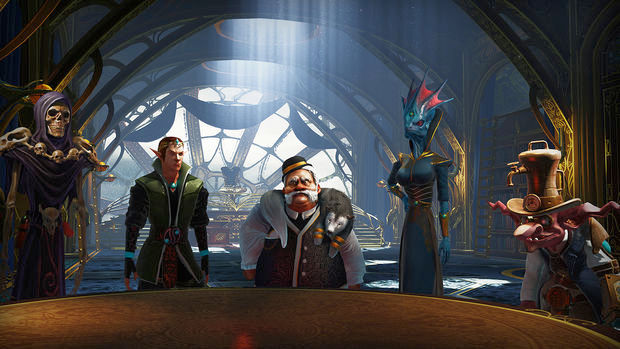 War is happening! It’s all terrible and such, because wars usually are. The old emperor is dead, his unlikeable spawn are in charge, and it’s up to his illegitimate half-dragon offspring to unite the disparate fantasy races and save the Empire. Units must be constructed, buildings must be selected to augment the many regions under the half-dragon Prince’s control, gay marriage bills must be pondered.

As I said, Dragon Commander is full of surprises. While the great war is ostensibly the focus of the fantasy romp, the needs and desires of Rivellon’s population cannot go ignored. Onboard the Raven — the prince’s ostentatious flying ship and mobile headquarters — representatives from the colorful races that inhabit the realm have gathered, and they all come with their own political points of view and agendas.

There’s the frightfully anaemic undead ambassador, a religious zealot; a dwarf in a bowler hat and fox fur scarf, representing capitalist ideals; the lizard spokeswoman, haughty and arcane; the devilish imp representative, who just wants to blow things up; and finally, the elven ambassador, who is liberal and green. Unsurprisingly, it’s the latter who proposed the gay marriage bill.

These politicians might be caricatures, but their motivations, prejudices, and desires run parallel to those of their real-world counterparts. It was ultimately up to me to decide whether or not to pass these bills and make them laws, and I found myself juggling the pragmatism one might expect from a war-time leader and my own political leanings.

All the stuff that happens between the battles should be fluff, right? This is a real-time strategy game, don’t you know? Surely I shouldn’t be having this much fun chatting with a one-eyed, one-armed grouchy general in a bar, or listening to the political rhetoric of a god-fearing skeleton — but there I sat, giggling as I hung around the Raven, not killing anyone or blowing anything up. I did inspire my lizard general to beat up an elderly imp, however; I suppose that counts as violence. 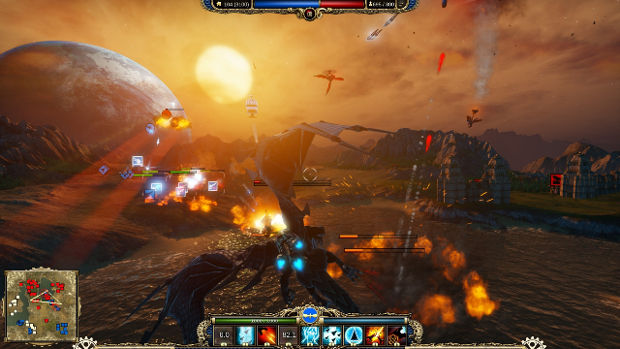 As important as all of this is, from the politics, to the hint of role-playing dialogue, and two separate research paths — the imp’s technology and the magic of my Gandalf-like mentor — it’s the strategy and tactics that undeniably make up the meat of this unexpectedly delicious digital sandwich.

Surprise is really becoming a theme here, because the battles were not at all what I was anticipating. I start off by selecting the battle map, which is a real map, situated on the bridge of the Raven, and I can move little pawns around this map, or place cute wee buildings on my provinces. I’m playing a board game, and it’s delightful. I can even select cards from my deck, more of which are generated depending on what buildings I’ve erected, and these can give boons to my provinces or even give me an edge in battle.

Right-o, my half brother has invaded my territory — as nasty siblings are wont to do — so it’s time to leave the board games behind and dive into some real conflict. 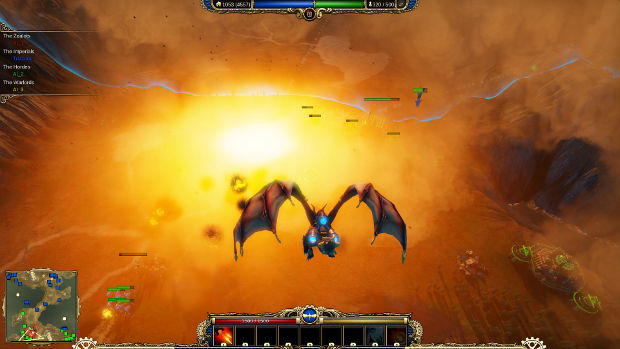 Have Larian bugged my home? I fear that they might have. How else would they know that what I always really want from my RTS games is something akin to Total Annihilation or its younger cousin, Supreme Commander. There’s that constant stream of mechanized units, pouring out of bases and onto the battlefield. A never-ending torrent of explosive, aggressive vehicles that can be blown to smithereens in the blink of an eye, but recruited very quickly.

There’s no time for me to sit back and soak it all in, because by the time I’ve finished sipping my margarita, comfortably put my feet up on my desk, and cracked my knuckles, I will have lost the bloody battle. What I’m trying to say, poorly, is that Dragon Commander is a very fast game. And yet there’s quite a bit of management going on.

Not to fret, though. As all of this management is tailor made for the balls-to-the-wall pace of the explosive extravaganza. Turret and building nodes, for example, are captured by proximity. My mechanized assault force of giant zepplins, magical airships, and speedy little land vehicles that sort of loosely resemble tanks arrive at their destination, fight their little steel hearts out, and while they are doing that I’m immediately putting down anti-air guns right next to them to give them some support. 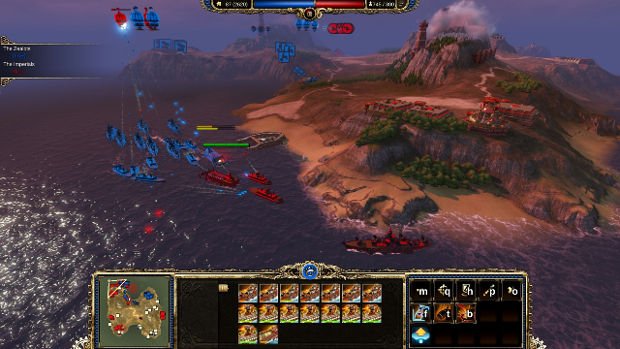 And then I turn into a giant bloody dragon. Maybe I was too hasty when I previously suggested that being a dragon wasn’t the most entertaining aspect of Dragon Commander, because it really is ridiculously fun. At the touch of a button, I go from commanding my legion to flying around the battlefield, casting spells, raining down fire and projectiles, rapidly dodging enemy rockets — it’s exhilarating, especially given the pretty, brightly-colored battlefields that make up the dragon’s playground.

The dragon isn’t simply a powerful unit, as the game’s mechanics immediately shift from typical strategy fare to an airborne shooter. The joy is short lived, however, as the limited control I have over my units in dragon form necessitates switching back lest I forget that I actually have an army to command. And despite the raw power of the oversized flying lizard, a few AA units can rapidly shoot it out of the sky. The dragon can be respawned, but at a cost — specifically the sacrifice of units — shrinking the all important reinforcement pool. It’s risky, but dragons.

In the single-player campaign there is the sense that you might have a rather unfair advantage over the AI, considering the fact that they don’t have a dragon. An overwhelmingly powerful force can be decimated in seconds with dragon fire, and from what I’ve experienced, the AI simply doesn’t have anything that can compare. Multiplayer, however, is a very different story. Dragon-on-dragon warfare? It’s what videogames were designed for. 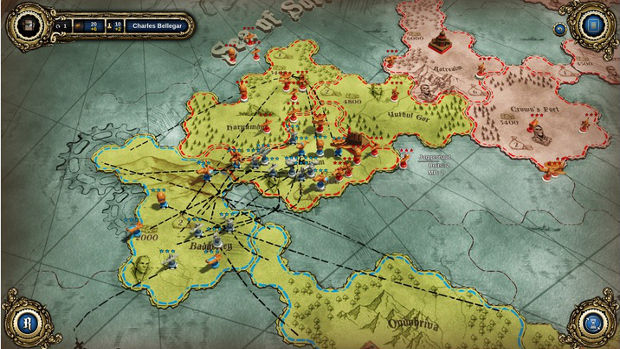 I’m not sure what anyone else expected from Dragon Commander. It’s a spin-off being developed by a studio known for its RPGs, so I’m guessing not a lot. And yet it’s shaping out to be really rather splendid. I still have questions, though. I’ve yet to really pay much mind to the multiplayer, what with the lack of other players — my peers are apparently too busy writing words to get beat up by me in a dragon scrap.

There are also a few niggling issues. If I have to hear the units spew their annoying, extremely loud stock phrases one more time I will kill someone. And research is, to put it bluntly, a wee bit boring. But I’m eager for more. The gags elicit guffaws, the strategy is compelling, and dragons are awesome. I wait with baited breath to see if I continue to enjoy myself when it comes out next month.