[Editor’s note: this is part of a network-wide series of articles that will go up over the next couple of days. Be sure to check at the end of each post for links to the previous stories, in order to get the full picture of things! – DMV]

My time in the “motherland,” as some would call it, brings me into constant temptation. I’m beleaguered by anime, manga, games, doujinshi, and all other sorts of machinations meant to drain my wallet, my bank account, and leave me in a state of pure and utter ecstasy, at the same time robbing me of my train fare home. Well, at least the slums are nearby.

But, since I’m talking to you fine folks here at Destructoid, I figured I would go into some detail about what it’s like in Den Den Town when it comes to shopping for videogames. “Some detail” is probably a little vague – I will go into enough detail so that you can feel the constant wave of people shoving you as you try to hop from store to store, searching for that strange and rare title that you’ve been desperately searching for.

In Den Den Town, much like it is in America, there are two main places to buy videogames: either at large stores, which deal in the newest generations of systems, and carry the main titles; the other option is to go to one of the stores that focus specifically on games, much like Gamestop. Similar enough, right? As I mentioned before – it’s a parallel universe, where the appearances are almost identical, but the differences are subtle, and almost unnerving, for an unexpecting foreigner like myself. 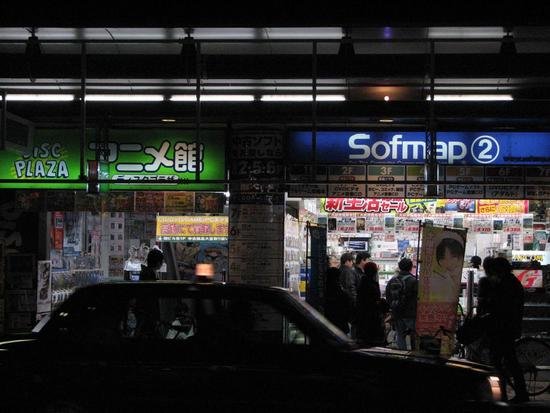 With the large stores, it’s similar to Best Buy or Circuit City. Nothing too special, really. If you’re at a place like Yodobashi Camera, it’s much easier to find the things that you need, because there are helpful sections for music, learning, action, RPGs, and all the other genres that you might be searching for.

When you first enter the store – or, more often before you even enter the store – large displays are set up, posting cardboard standups, gameplay and FMV footage on constant repeat, and mock display cases set up to entice passers-by to come in and see the spectacle at-hand. Recently, it’s been Call of Duty 4, Bioshock, and Kenzai, with some early displays for Metal Gear Solid 4 popping up here and there. In addition to these displays, there’s almost always an employee or two hawking the products, or cheerfully shouting, trying to invite in as many customers as they can.

From there, the store will be filled with a wide variety of titles in the current generation, with a large portion of PS2 games sitting around as well – remember, the system is far from dead, with publishers putting out dozens and dozens of games for the system every month. Besides the promotional items that are immediately near the entrance, there is often a large table or counter, displaying three or four recently released or extremely popular titles, such as the Lucky Star PS2 game, enticing you to buy them. Beyond that, the games are broken down by system and genre, and finally, alphabetically.

In the large stores like Yodobashi Camera or Sofmap, there is an overwhelming variety of titles. When you look on the shelf, there are rarely more than two or three copies of a title on the shelves (unless it’s a new/hot item), with replacements being filled in as stock runs out, and someone asks about the title in question. These large stores can do this simply because they have the real estate to. The Yodobashi Camera in Umeda is a mammoth when compared to the smaller, game-specific stores that are in Den Den Town. They have more gross space to allot to storing extra merchandise, instead of putting more out for people to buy. 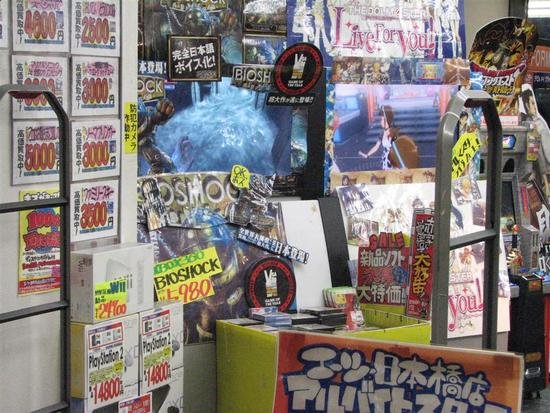 In Japan, real estate is at an absolute premium, and as one of the store clerks explained to me, if a customer can’t easily find what they are looking for, then they will get frustrated and leave – going somewhere else where they can easily pick up what they want. If a customer wants to just browse around, then the games are easily organized – both alphabetically and by genre – so that people who are browsing can find the genre that fits their mood and then browse within that section. That’s why so much care and attention needs to be put into how the store is arranged.

Gamestop follows the model of many American stores, in that there is some form of organization, but the customer isn’t usually able to find the item right away (unless it’s a big-ticket item). Instead, the buyer must browse through titles in order to find the exact item they want, all the meanwhile encountering other items they might want to buy as well. It’s a useful tactic for dealing with people who are there just to browse – the likelihood of making a sale that way, by having them rummage through dozens of titles at random, increases greatly.

Apart from the setup of the store, there is also how the staff who works there interacts with you. In this sense, Japan is just like America – either the employees are really knowledgeable and work at a game store because that’s what they know, or they are completely clueless and were hired because they were pretty. I don’t quite have the language skills to figure out if I’m being judged as a human being based on my purchases, but thus far, it’s fairly similar to dealing with someone in America. With the clueless staff, they will give an over-enthusiastic shot at looking through the game stock, in the exact spot that I was looking in, until I beg them to stop because I know they’re not going to find it.

I’ve yet to have an employee approach me and ask if I need any help, or try to get me to pre-order anything. The most that’s happened is they ask me if I have a point card. Not even if I want one. I’ve hinted that I’ve wanted one (I’m looking at you, Yodobashi Camera), but the employee just goes on with my purchase. It’s not like Japan has a lack of pre-orders and whatnot here; they just have the items prominently displayed, and if you want to partake in that sort of consumerism, then it’s freely available for you. While it’s been nice to go into a store and it be assumed that I was a competent consumer, I do yearn for the times when I was visibly lost, and a clerk would come up to me and offer to help. 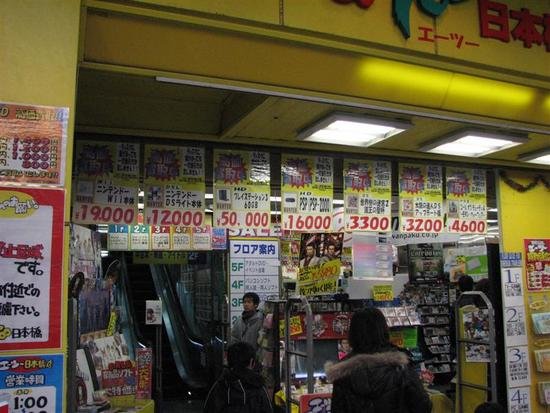 I’ve talked quite a bit about the big stores, mainly because they are the most like what you’d run into in America. I’ll be going into greater detail what the smaller stores are like by looking at one in particular, Retro TV Game Revival. But, besides that, I want to spend a paragraph or two on the stores that are not as retro-focused as my next Destructoid piece will be.

The smaller stores need to pull off a hard feat – straddle the gap between selling new products and keeping some level of retro stock, in an area where they had little to no storage room. What makes this so difficult is that they’ve got to compete with the larger stores in terms of new stock, and at the same time, make themselves distinct from just about every other store in Den Den Town. It’s rather hard to pull this off, because you sacrifice a larger library of games for more variety. Some do this by selling anime, figures, and music in addition to games – this can come off as scatterbrained, not really giving me much interest to shop there.

While a place like Den Den Town is a wonderful area to go to, it’s not a venture that’s necessarily feasible to make just to go out and buy a game. In general, visiting Osaka is a day trip, taking about a half hour to get there, and getting to Den Den Town and back home will usually cost $10. Instead, there are local stores in my town that can meet that need much more adequately, costing me only the time that it takes me to ride down to Tsutaya or the local game shop to pick up the title I need.

Much like New York City, I feel as though Den Den Town is the place to go when you want to find something special and out of the ordinary. Sure, the big stores will help you meet the needs that your local ones can’t (mainly with game accessories), but searching through the local stores is the real fun.

A day in Den Den Town: An introduction

Next up: Be sure to check out Tomopop!

Filed under... #Destructoid#Exclusive on Destructoid