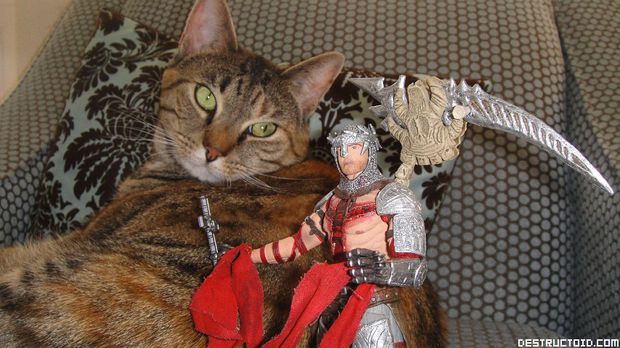 Electronic Arts sent over a fancy little Dante figure (seen above, absolving my cat of her sins) today, the same one you’d receive for pre-ordering Dante’s Inferno at shops like GameStop.

There’s a reason I don’t work for our sister toy site, Tomopop, and it’s because I don’t know much about action figures other than “cool” and “not so cool.” From what I can tell, this NECA-produced figure falls into the “cool” category, especially for a pre-order item. The thing is pretty detailed, and comes complete with a scythe and cross which can be placed in either Dante’s hands or weapon holders. It also has 14 “points of articulation,” and I’m only writing that because I think that’s what someone who actually knows something about action figures might say.

It should be noted to those wearing tinfoil hats that this figure arrived after my review was written. And to those who think that a free action figure (or free anything for that matter) might influence my score — which is admittedly in the high end of review scores on Metacritic — you need to get out of the house more often.

Dante’s Inferno is out in Europe today, and hits US shelves next week.