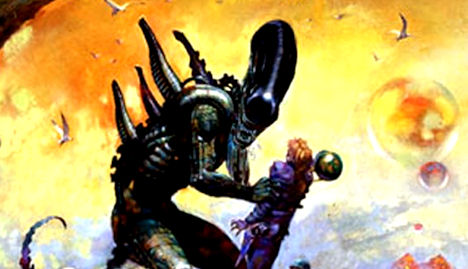 Despite having a considerable share of bad apples in the crop, Aliens must be one of the most consistent movie-to-game licenses in terms of quality. It is very rare that a movie series can be remembered fondly for its videogame adaptations, but the vast number of console and arcade classics have cemented the license’s place in history.

Perhaps it’s because the Hollywood classic Aliens — said be some to be of the few sequels even better than its predecessor — is just so suited to a videogame environment. The endless waves of enemies and gun-toting marine bravado is almost game-like in its own right, all it needed was interactivity.

As a big fan of the videogames and the films that spawned them, and with Sega publishing Aliens: Colonial Marines later this year, I thought it might be nice if I took a stroll through the history of Aliens-themed gaming, highlighting significant entries and a few of those aforementioned bad apples.

Read on for more. 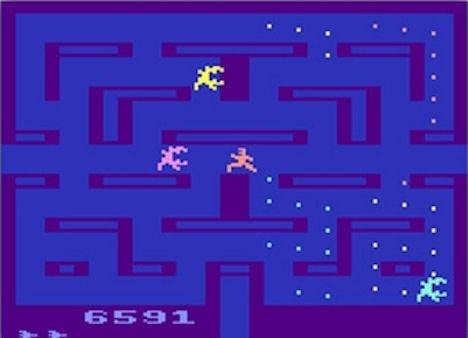 Aliens games started, as most things in life do, with the Atari 2600. Despite the original film being very much a horror film as opposed to an action flick, one that was seriously not recommended for children, that didn’t stop Fox Video Games from releasing a game in 1982. The game was basically Pac-Man, but with Aliens. Playing as a human survivor, one must eat pellets … sorry … destroy Alien eggs while being pursued by three ghosts … sorry, Aliens.

The Aliens, such that they were, resembled something closer to Audrey II from Little Shop of Horrors, and failed to really capture the menace of an H.R Geiger painting, considering Geiger didn’t really color his creations in pastel shades of blue, pink and yellow.

The license fared slightly better on the Commodore 64 and ZX Spectrum, where it had Alien by Amsoft and two different versions of Aliens: The Computer Game by Activision. One version was a First Person aventure, while the other was split between a type of flight sim and a very rudimentary scrolling shooter. Nowadays, they look about as good as you could expect a game titled Aliens: The Computer Game to be. 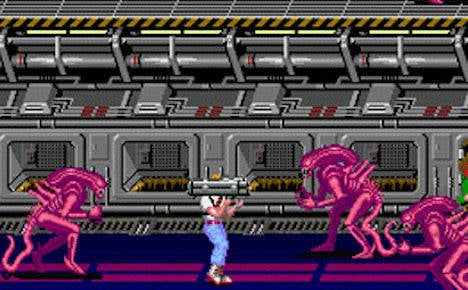 The franchise didn’t take a more recognizable shape until Aliens came to the MSX. Sadly, this was a Japan-only release, but it closely resembled the more action-oriented focus that Aliens games would become known for. This SquareSoft title, published in 1987, was a Contra-esque scrolling shooter, something which Konami would refine in 1990 with the first Aliens arcade game. The arcade game featured a lot of variety in terms of gameplay and enemies, something which previous games had been lacking. It also had pretty epic Alien Queen encounters.

Alien 3 brought with it the first truly classic Alien titles, in my opinion. After a brief top-down Gameboy adventure, a multi-tiered, hostage-rescuing sidescrolling shooter made itself known on the Commodore 64, Amiga, NES, SNES, Game Gear, Master System and Genesis. Obviously, each version played a little differently and not one them resembled the movie very much, but they were bloody and violent, just like all good games should be. While the film itself is not looked upon favorably, Alien 3 ushered in a great new direction for the videogames. 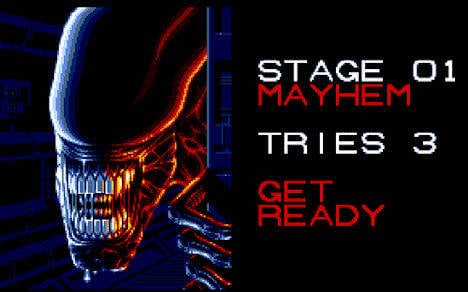 A second title based on the third film, Alien 3: The Gun, was the first title to bring lightgun action to the franchise, which also helps show jut how versatile and “videogamey” the Aliens license can be. It of course made total sense to put a plastic gun in your hand and throw waves of Xenomorphs at you, which is exactly what Sega did with this arcade title.

As the nineties continued, the Aliens and the Predator licenses began to make sweet love, and it wasn’t long before videogames exploited the new possibilites. While Capcom’s iteration of the crossover is the most well known, it was pipped to the post eight months earlier by Jorudan, which released Aliens vs. Predator as a beat ’em up for the SNES in late 1993, A month later, Alien vs. Predator: The Last of his Clan was released on the Gameboy, putting players in charge of a Predator as he quested through sidescrolling mazes on a mission to kill the Alien Queen.

However, Capcom took home the nostalgia trophy, with its 1994 arcade classic still fondly remembered by many today. Aliens vs. Predator for the arcade featured three-player co-op and the four characters were made up of two marines and two predators, uniting against the Xenomorph threat. The game was actually based off of an early draft film script and its release had been intended to coincide with an Aliens vs. Predator movie, even when an entirely new script had been written. However, no Aliens vs. Predator film was to surface for another decade, so the game eventually released as a standalone crossover in 1994. Many would argue it was better than the film that eventually came out. 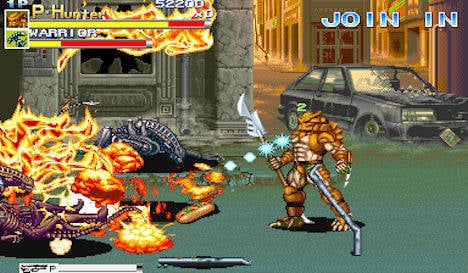 This game was followed by Aliens vs. Predator on the Jaguar, which stood out by allowing players to actually take control of the Alien. While the game itself has not aged too well, playing as the Xenomorph was quite interesting. It couldn’t heal itself like the Marine or Predator characters, but it could “cocoon” enemy soldiers. If you died, you would respawn as a freshly born Alien from the chest of a cocooned soldier. That is something we need to see more of in the videogames.

The franchise took a brief break from gunslinging and beat ’em ups to enjoy the quiet Aliens: A Comic Book Adventure which was released on DOS and starred a  Lt. Col. Henricksen, named after actor Lance Henriksen who played Bishop in the films. The series would return to its violent roots in 1998 with Aliens Online, which allowed players to pick between Marines and Xenomorphs and kill each other silly. It also allowed one to play as an Alien Queen and even an Alien Empress, provided they scored enough kills as Drones. 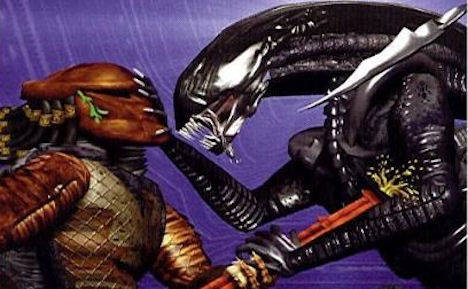 The Mythic-developed Aliens Online was popular enough for a group of fans to try and keep playing after the game was canceled. It was cloned using the Half-Life engine, but unfortunately FOX threatened legal action and the whole plan was scrapped. Aliens Online is no longer available.

In 1999, Alien Trilogy came along. It was one of the first games I ever got for my PlayStation, and as such, has earned itself a place among my personal favorites. It was an FPS, and a very derivative one at that, doing absolutely nothing that Doom didn’t do years beforehand. However, it had Aliens in it, and I was still at the age where glass that shattered when you shot it impressed me, so the game became a great love of mine. It also had some wonderfully atmospheric music.

Sadly, that would be it for truly memorable Aliens games for a while. Alien Resurrection was stuck in development Hell, with a canceled Dreamcast Version and a PlayStation version that didn’t release until months after the movie in 1999, flopping painfully. Aliens: Thanatos Encounter released quietly on the Gameboy Color in 2001, while an FPS called Aliens vs. Predator and its sequel released on the PC. AvP2 got good reviews, and became an essential fixture at LAN parties. Sadly, the series ended on a low note with a critically mauled expansion pack, but the PC gamer crowd loved what came before. 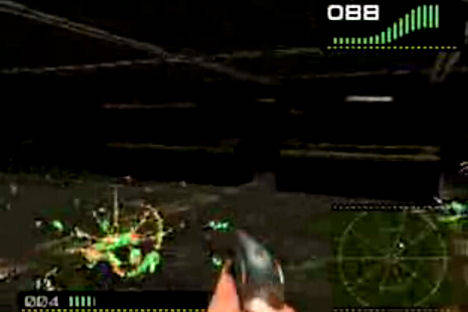 In 2003, Aliens vs. Predator: Extinction was released, which was a somewhat decent strategy game. You could play as either the Marines, Predators or Aliens each one playing quite differently. It was a good idea, but again, lacked the true sense of a classic.

The eventual release of the Aliens vs. Predator movie really didn’t yield much in the way of videogame tie-ins. There were a couple of mobile phone games, but that was about it.

Luckily, 2006 brought with it another great Aliens arcade game, Aliens: Extermination. This two-player game had a pair of plastic pulse rifles bolted to the machine, and it was a very simple case of blasting apart any of the phallic-headed parasites that screeched your way. If you’re interested in checking Extermination out, and it’s well worth the quid, there’s a Sega Arcade in the middle of the Trocadero in London that has a cabinet. I have quite happily wasted money in that box. 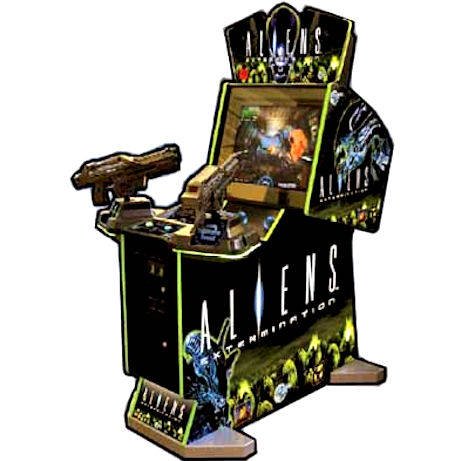 Sadly, we must end our little history lesson with Aliens vs. Predator: Requiem, based on the movie of the same name. I’ll be honest with you, I have not played this game, but I’m willing to bet you haven’t either. It was released on the PSP of all things and put you in control of the Wolf Predator. There has also been talk of a Sega-published Aliens RPG, but so far, no details have come to light.

And that brings us to Aliens: Colonial Marines, a game due out for release later this year. Development originally started in 2001 and was headed up by Check Six Games for Fox Interactive and EA Games. It was destined to become canceled and completely forgotten about until Sega purchased the rights to the Aliens license and resurrected the game’s name and setting. 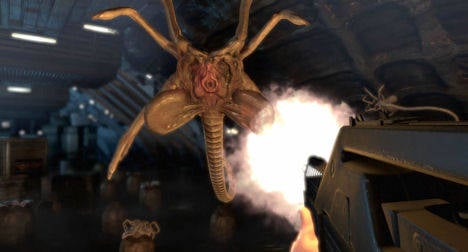 Now with Gearbox at the helm, Colonial Marines has become a squad based FPS with co-op play which the studio claims is completely unrelated to the canceled title. It’s been a few years since the last great Aliens game and I’m itching for another one. It’s a film license that has had an unusual amount of success where most licensed games fail. Here’s hoping that Gearbox and Sega can keep this trend alive.