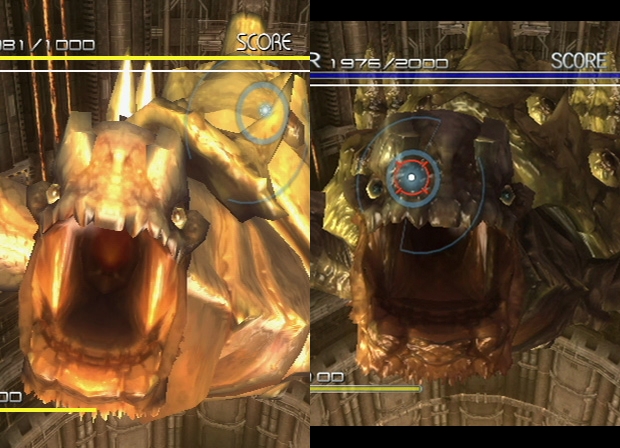 At this year’s E3 Nintendo completely and utterly ignored Sin and Punishment 2. The game wasn’t mentioned at their press conference and was tucked away so well at their booth that you literally had to be coming at the booth from a certain direction in order to notice it. The PR guy who took me around the booth didn’t even mention that it was there. Who knows what was up since most people came away from the game with a very positive view. Since E3 we’ve heard next to nothing on the game either, and I would wager that it is one of the most anticipated Wii games of next year.

With this in mind, here’s some news. The game is looking better — much better. It actually wasn’t looking that bad in the first place, but evidently the past few months have been used to polish it up to an even greater level of shinyness. Dengeki, got their hands on some new images from the game as part of pushing the game’s Oct. 28 launch in Japan and they look great. The real interesting thing though is a comparison of one of the boss battle screens that was pointed out. The screen on the left was taken at E3, the screen on the right is from the Dengeki screens. Notice a difference? That’s the magic of implementing bump mapping, and it’s a magic that more Wii games need to use.

So who isn’t excited for this game to finally come to the West?