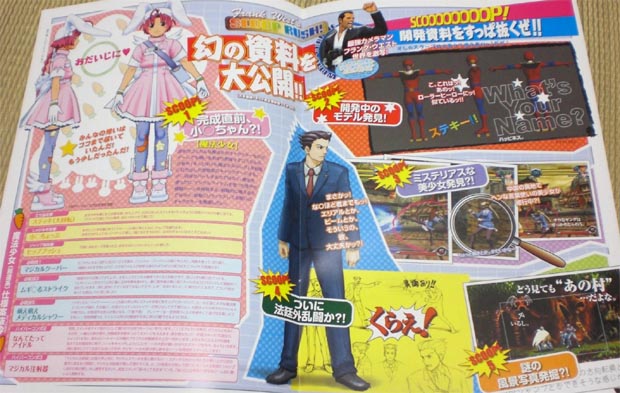 A while back, we got an obscured look at this image from Capcom’s “Secret File” promotional mini-magazine focusing on Tatsunoko Vs Capcom. It showed blurry images of Ace Attorney‘s Phoenix Wright and Capcom Fighting Jam‘s Ingrid as they might have appeared in the game. This scan led me to ask the game’s producer if these two characters could eventually make a comeback as DLC. He seemed keen on the idea.

If they ever do make it out as DLC, it looks like they may not be alone. In this totally uncensored scan, we see more of Frank West’s “SCOOOOOOOOOPS”, including two other characters that were cut from the game. Rollerblade Hero Muteking and Komugi, both from the Tatsunoko stable, didn’t make the grade. We also get a sneak peek at a Ghosts ‘N Goblins looking… thing. Could be a mini-game, could be a stage. Either way, it looks awesome.

Personally, I’d love to see all this stuff make its way into Tatsunoko Vs Capcom someday, but that’s just because I want more Tatsunoko Vs Capcom any way that I can get it. Now that everyone else has the game and finding people to fight online is commonplace, I’m beginning to feel like 9.0 wasn’t a high enough. The more people that I play against, the more I come to see how great this game really is. Adding even more chaos-fodder to mix could only work to make me love it more.