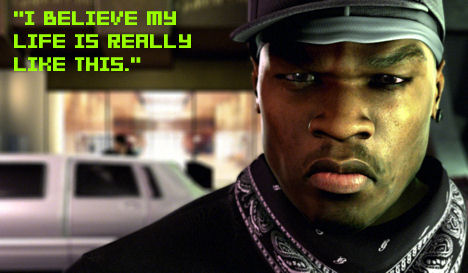 50 Cent: Blood in the Sand director Julian Waddows wants his game to be the Burnout of shooters, to take the genre as it exists and emphasize all that is fun.

“We wanted to do for the shooter genre what Burnout did for racers,” states Waddows. “What Diablo did for RPGs. We wanted to take all that makes the genre fun and exaggerate it.” Well, I think a self-centered rapper mowing down terrorists in the Middle East is quite an exaggeration, so Waddows is off to a good start.

Blood in the Sand is supposed to actually be looking quite good. The only problem is that 50 Cent is definitely in the top ten least likable people on the planet, and his standing in that list will do nothing but rise once Ian Huntley succeeds in killing himself. Still, the man who lives in his own bullet-drenched fantasy world and should replace the “e” in his name with a more suitable vowel has a fair few fans, so I expect to see this on Gamestation’s chart shelf within days of release.