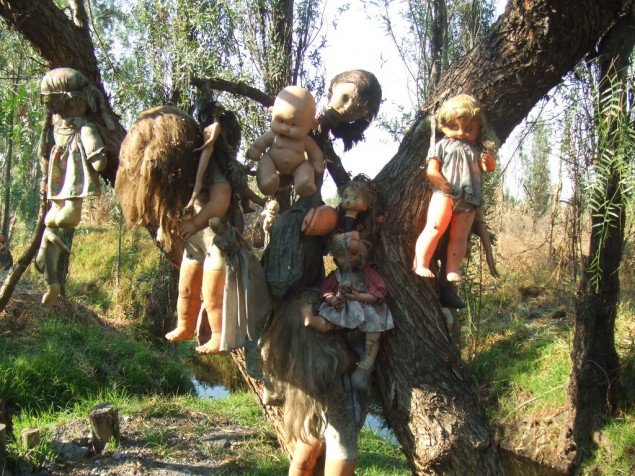 [Dtoid community blogger SpielerDad offers up some real life spooky places that would be a perfect setting for a horror game. Warning: Pseudo-NSFW images below. Want to see your own stuff appear on the front page? Go write something! –Occams Electric Toothbrush]

Halloween also is synonymous with things that go bump in the night, or least it used to be, before it was commercialized to the point of becoming all warm and fuzzy. I’m not saying that you need to go all out and decorate your house so it looks like Rob Zombie’s place, but Halloween used to be about telling ghost stories, and generally creeping each other out.

In my younger days, living in the suburbs of New Jersey, my friends and I would pick up issues of Weird NJ magazine and trek out to find roads less travelled, abandoned places, and supposed haunted thingamajigs. Most of the time they were lame, but occasionally we’ll find places that were indeed creepy.

Ironically enough, if there was some deranged undead mass murderer in the woods, we were making ourselves prime targets. Everyone knows that teenage SEXY TIME will lead to getting a throat slit in a cabin out in the woods

Video games give us the unique ability to creep ourselves out in the comfort of our own homes without actually venturing to a place that is cursed by some undead malevolent force.  There are plenty of real world places that are supposedly haunted, cursed, or just plan creepy, but designers have generally ignored these places in favor of inventing their own.

So I went ahead and spent five minutes (really I did not give this much effort) putting together a list of creepy places that would be would right at home in a horror video game.

Have any additional ones you want to add?  Let me know about them in the comments.

When you think of New York City, you think of densely packed blocks of buildings, sidewalks clogged pedestrians, and streets packed with cars.  However, out in the East River, between the Bronx and Rikers you will find two abandoned islands with a bit of history.

Riverside Hospital was the first resident of the North Brother Island. It was founded in the 1850s to treat small pox and isolate victims of the disease. Eventually, it became to be used to quarantine all individuals that were believed to have communicable diseases. The infamous Typhoid Mary was also confined to the island for over twenty years before her death.

On June 15, 1904, the steamship General Slocum, shipwrecked and burned on the island. Over 1,000 people died from the fire or from drowning, their bodies washing up on the islands shore.

In the 1950s the hospital became a facility to treat young adults suffering from heroin addiction. Addicts were confined to this island and locked in a room until they were clean, many times against their will. By the 1960s widespread staff corruption forced the hospital to close.

The Island is now considered a bird sanctuary for the Black-crowned Night Heron and off-limits to the public. Many of the buildings are still standing, but are highly deteriorated and the island is reverting back to a forest.

Interestingly enough, in 2008 the Herons abandoned the island for “unknown reasons.” Probably because Herons are not stupid and realized that they were living on a HAUNTED FUCKING ISLAND!

I’m thinking a first person shooter would be a good match for this location.  I think Brother Island would fit in nicely in a game like F.E.A.R.

Speaking of historic haunted islands… the island of Povelgia in Venice, Italy has a slightly longer history than Bother Island. It also has another name, as the Most Haunted Island in the World.

In the year 429, the island’s first inhabitants settled there while fleeing barbarians. In the 1600’s it became a fortification. In 1776 in became a quarantine station for those wishing to enter Venice. It also had a few breakouts of plague during this time. Rumor has it that there so many victims of the plague were burned there that the soil is 50% human ash, not to mention multiple “plague pits.”

Oh, and of course, in the 1920’s it was turned into an insane asylum, because of course it fucking was. Legend has it that the doctor who ran the asylum performed a lot of unnecessary experimental surgery. He then became insane himself jumped from the island’s bell tower.

How has this island not been featured in a video game yet? Povelgia could have been a mission in Assassin’s Creed II, breaking up some of the action with a bit of the super natural.

Known as the most haunted place in India, many people who visited the abandoned yet surprisingly intact structure say that there is a strange feeling in the atmosphere, and leave feeling anxiety and restless.

Many say that the fort is cursed, and anyone who tries to spend the night there are never seen from again. The Archaeological Survey of India has even posted signs forbidding anyone entering the fort before dawn or staying after sunset. Is this because the place is haunted? Probably not. Who are we kidding; this place is FUCKING HAUNTED AND CURSED!

I’d say that a place like Bhanghar Fort would make a fine and believable location in Tomb Raider.  Lara needs to get up in that place and desecrate some shit for archaeology.

At the base of Mount Fuji in Japan, lies the Aokigahara forest. A beautiful and picturesque area frequented by many tourists and referred to by the locals as the “Sea of Trees.” Many people also refer to it as the “perfect place to die.” Aokigahara has the distinction of being the second most popular place to end one’s life, after the Golden Gate Bridge in San Francisco, California.

It’s not uncommon for people to get lost in the dense in the dense forest. Given the high iron deposits in the volcanic soil, compasses have been known to act erratically in the area, but that’s scientific gobbledygook! Everyone knows the compasses go haywire because the ghosts don’t want you to leave! Spiritualists in the area say that the ghosts of the suicidevictims have permeated the trees of the forest, so there you have it.

On a more somber note, volunteers comb the forest looking for the remains of those who have taken their own lives, but given how dense the forest is, many are not found for years. It’s not unusual for hikers or volunteers to find skulls and bones from suicide victims from years ago.

On more macabre note, rumor has it when the volunteers find a suicide victim and bring him down from the forest; he is housed in a special room. The volunteers then play a version of Rock-Paper-Scissors to see who the pleasure of sleeping in the room with the corpse.

Supposedly, they believe that if the corpse is left alone, it is very bad luck for the yurei (ghost) of the victims. It is said that the spirits scream throughout the night, and their bodies will move on their own. I call bullshit but HOLY FUCK SERIOUSLY!?!

I think the Aokigahara forest would make an interesting location in the Yakuza games. I picture a mission where they go out into the forest to teach someone a lesson, but things go awry when the supernatural forces make themselves known.

In the beautiful English countryside you’ll find many charming villages. Pluckley is no different that it has strolling meadows, quaint cottages, and pretty farms. It also has the distinction of being the most haunted village in England, according to the Guinness Book of World records.  Depending on whom you ask, there are 12 to 16 confirmed ghosts haunting the village.

Here’s a quick rundown of a few of the restless spirits you may encounter in Pluckley:

I would like to see an English version of Silent Hill that takes place in Pluckley. It will be just like any other Silent Hill, but more… err… Englishey.

BONUS – Any place in Australia

Everything in Australia will kill you. This is a fact. Crocodiles, sharks, snakes, spiders, box jellyfish, giant fucking centipedes! You need giant balls of steel to live in Australia, and unlike like all the other places mentioned on this list, this shit is real and will murder the fuck out of you.

He will kill you and fuck your skull.

Think I missed a place? I’m sure I did as I only mentioned six places.  Let me hear what spooky and creepy places you think should be in a game.